Getting to know the immune system

An immune attack is a complex, coordinated sequence of events involving a variety of different types of immune cells. There are some immune cells that patrol the body, some that are ready to attack immediately on site, and some that gather evidence of potential threats and report back to cells that are lying in wait, ready to launch a much stronger and more precise attack when necessary.

What triggers an immune attack?

Immune attacks can be triggered when immune cells identify molecules in the body that don’t belong. The immune system is best known for its role in fighting against viruses and bacteria, which may enter the body through the mouth, nose, eyes, or wounds in the skin. During an infection, “danger signals” from viruses, bacteria, or damaged cells begin to arise, indicating the presence of a potential threat. This can trigger an immune response against molecules that seem out of the ordinary to the immune system; these abnormal or unfamiliar molecules are referred to as antigens.

In addition to fighting threats that come from outside of the body, the immune system can also sometimes recognize cancer, which can arise when cells in the body mutate in a way that allows them to multiply out of control. While cancer cells more closely resemble normal, healthy cells, and therefore may be harder for the immune system to spot, the mutations in their DNA may cause them to produce abnormal levels of certain molecules, or molecules that are not typically found in the body. These abnormal molecules may act as antigens and catch the attention of the immune system, triggering an immune attack. More information on how the immune system recognizes cancer is available here.

When a threat is detected in the body, some parts of the immune system are ready to attack almost immediately. These early responses always occur in the same way, following the same pattern of events regardless of what the threat is, and are often referred to as innate immunity.

An innate immune response begins when local immune cells detect the threat and begin to release molecules called chemokines and cytokines that act as signals or messages that call in other immune cells for help.

These small signal molecules can travel quickly through the body, allowing immune cells to communicate across short and long distances. Chemokines attract fluid, immune molecules, and non-local immune cells to the scene, causing inflammation. Cytokines send a variety of signals and messages, and can instruct immune cells to do things like become activated, multiply to increase in number, or launch an attack.

Some cell types quickly accumulate at sites of inflammation, including granulocytes and natural killer (NK) cells. Natural killer cells (NK cells) recognize and kill cells that appear infected, altered, damaged, or stressed out. Granulocytes – a subset of immune cells that includes neutrophils, basophils, eosinophils, and mast cells – release toxic materials on site, contribute to inflammation, open up blood vessels (to help immune cells to flow in and allow debris to be cleared out), and promote healing.

Some immune cells, including neutrophils, macrophages, and dendritic cells (DCs), identify unfamiliar patterns in their environment, including patterns that could identify invaders or tissue damage. When these cells detect such patterns, they are able to engulf or “eat” any infected, damaged, or dead cells. This process of “cellular eating” is called phagocytosis, and cells that are capable of doing this can be categorized as phagocytes. This process helps to clean up the area and clear it of dead cells and debris.

When certain types of phagocytes, like dendritic cells, “eat” cells or debris at the site of damage or infection, they are actually doing more than cleaning up – they are also gathering important evidence. Dendritic cells are able to break down what they’ve eaten and carry harmless pieces with them as they migrate to nearby lymph nodes – small, bean-shaped organs that are located throughout the body and act as the headquarters where additional immune cells are waiting. There are typically about 400 lymph nodes in the body, and they are mainly located in the neck, armpits, chest, abdomen, and groin areas.

If the evidence the dendritic cell is carrying is strong enough to represent a credible threat to the body, an immune attack will be launched from the lymph nodes. Compared to innate immunity, this secondary wave of the immune response, referred to as adaptive immunity, is stronger and more targeted towards the specific threat that has been detected.

When a potential threat is identified in the body, dendritic cells and debris from the site of the threat make their way to the lymph nodes where they may encounter T cells and the B cells. Dendritic cells present T cells with very small pieces of the specific threat as evidence of its presence in the body. Larger pieces of debris from a threat may directly interact with B cells. If these unfamiliar molecules or antigens interact with the T cell receptors on T cells or the B cell receptors on B cells, then these cells become activated, initiating an adaptive immune response.

As an adaptive immune response begins, additional molecules and signals help the T cells and B cells to become fully activated. When T cells and B cells become sufficiently activated, they begin to multiply rapidly, forming an army of identical cells, all capable of recognizing and attacking the specific threat that has been detected in the body, whether it is a virus, bacteria, or cancer. This army of cells then flows out into the rest of the body, hunting for the specific threat and ready to attack. 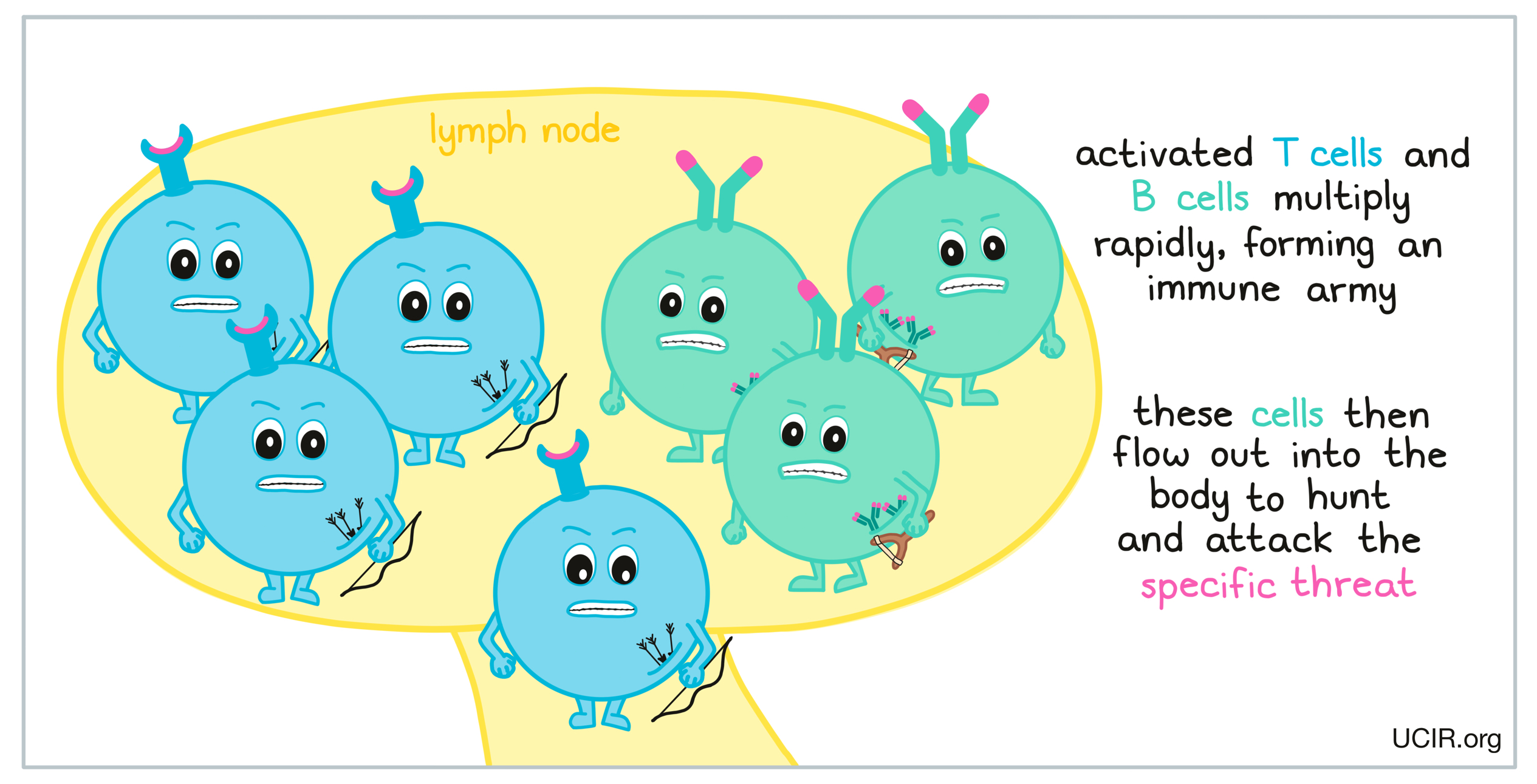 The B cell response:

B cells that are activated against a specific threat release protein molecules called antibodies. Antibodies have a characteristic “Y” shape. The tips of the upper arms of the “Y” shape can very precisely bind to target molecules, while the stem of the “Y” has a binding site that is recognized by immune cells. 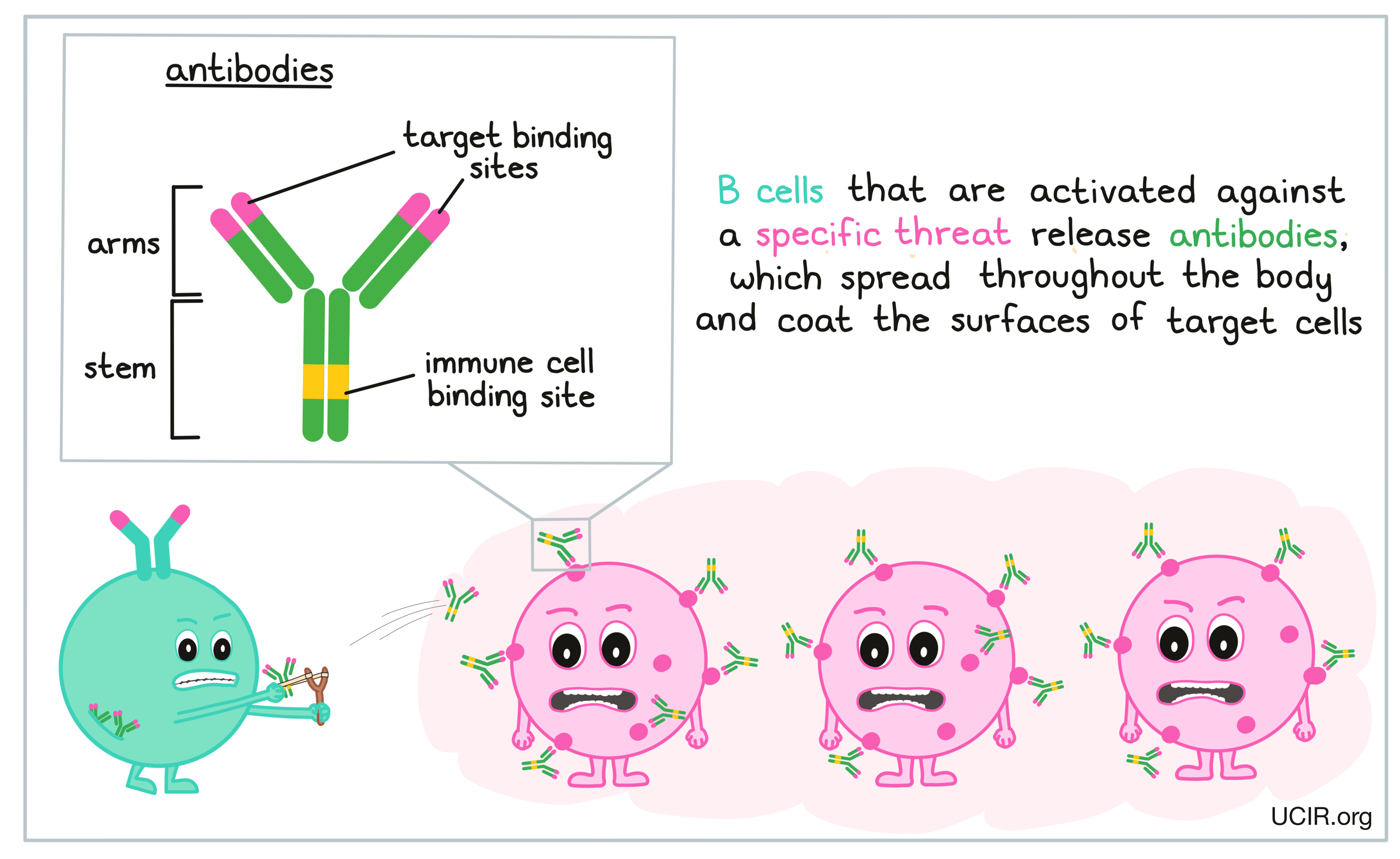 When a B cell releases antibodies against a virus, bacteria, or target cell, the antibodies spread throughout the body, and any target will become coated in antibodies. In the case of a virus, the antibodies neutralize the virus and prevent it from infecting more cells. In the case of bacteria or target cells, the antibody coating marks cells for destruction though several immune pathways. The first, antibody-dependent cell-mediated cytotoxicity (ADCC), involves attracting immune cells like natural killer (NK) cells to kill cells coated with antibodies. The second, phagocytosis, involves attracting phagocytes to come in and “eat” any targets that are coated with the antibody. The third, complement-dependent cytotoxicity involves activating immune molecules called complement, which form structures that can puncture cells coated in antibodies, ultimately causing them to burst. 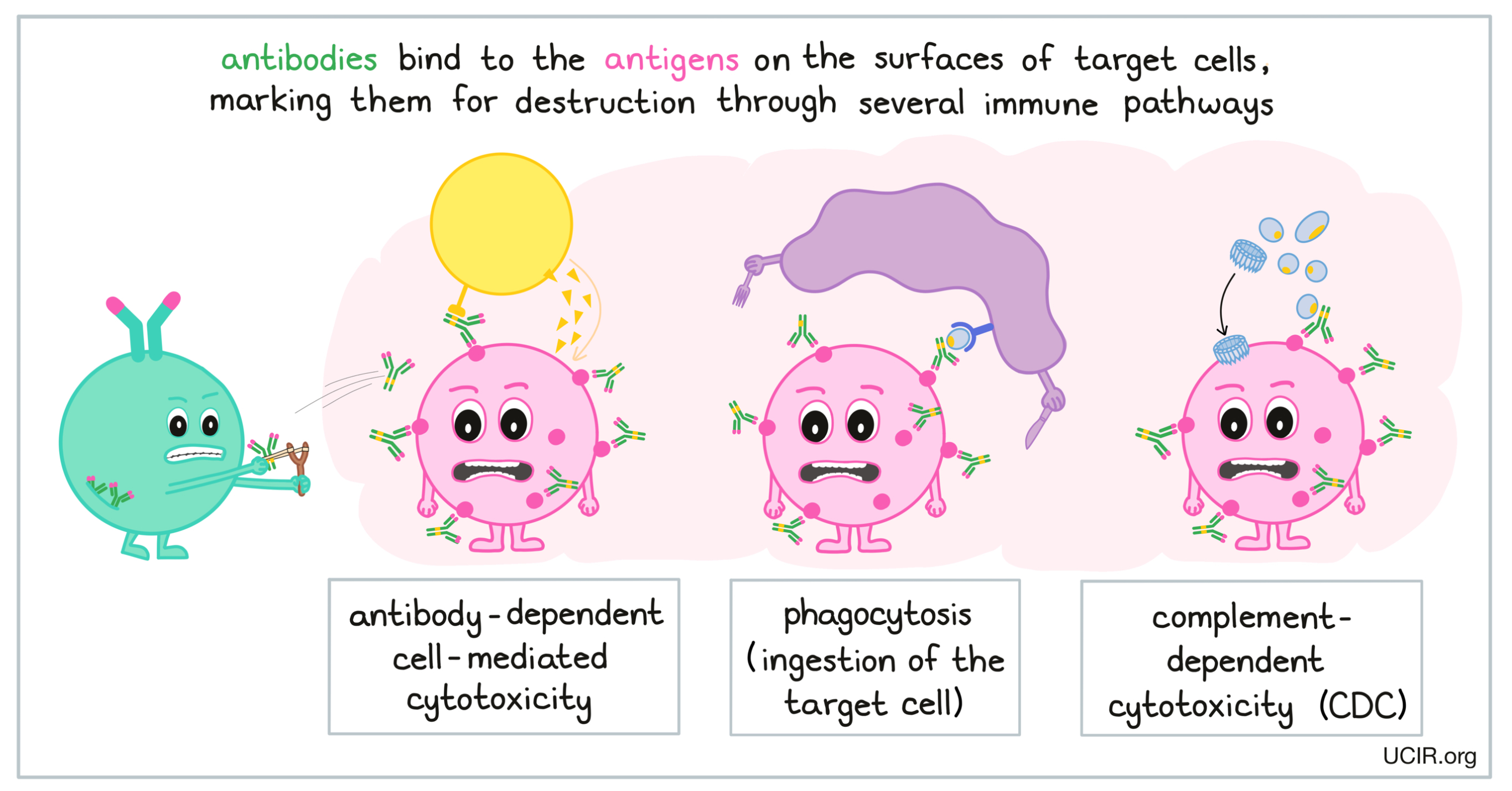 Once a threat has been cleared from the body, most B cells die off and are themselves cleared away from the site of the threat. A handful of B cells, however, will turn into “memory” B cells, which survive long-term and continue to either circulate throughout the body or rest in the lymph nodes. These cells remain on patrol, ready to react if the same threat is found in the body again. Because these cells are already activated, they stand armed and ready to attack the threat and to quickly reboot the immune response. Immune memory is what protects people from getting certain illnesses twice, or from getting illnesses that they have been vaccinated against. Generally, the immune system is much stronger against threats it has seen before.

While all three types of T cells play important roles in immune responses, cytotoxic T cells are considered the warriors of the immune system. When cytotoxic T cells encounter the specific threat that they are programmed to target, they release molecules that directly damage and kill the target cell. T cell attacks are strong, and a single activated T cell is capable of killing many target cells. T cell attacks are one of the best weapons the immune system has against threats in the body.

Like B cells, most T cells die off once a threat has been cleared, but some morph into “memory” T cells that can survive long-term. These cells remain on patrol in the body, either circulating in the blood or resting in the lymph nodes. If the same threat is ever detected again, these cells are poised and ready to quickly attack the threat and reboot the immune response.

T cells are often considered to be the most important cells in immune responses against cancer, and many cancer immunotherapies are focused on enhancing T cell responses. A more in-depth explanation of T cells, how they function, and their role in cancer is available here.

While B cells and T cells best represent the adaptive immune response, some cell types straddle the line between the innate and the adaptive immune responses. For example, natural killer T cells (NKT cells), as their name might suggest, have some of the characteristics of both T cells and NK cells. Another cell type, γδ (gamma delta) T cells, resemble standard T cells, but have a different type of receptor, meaning that they have the same cell-killing powers as T cells, but are triggered by different signals. These cell types are rare, and less is known about how they function, however, some research suggests that these cell types may play important roles in fighting some types of cancer.

While checkpoints serve as an important safety mechanism, in some cases, they may slow down desirable immune responses too soon. This is often true when the immune system faces off against cancer, and checkpoint blockade is a common strategy in cancer immunotherapy.