What are T cells?

T cells are a type of immune cell that play an important role in protecting the body against specific threats, and rely on the detection of antigens – abnormal or unfamiliar molecules that identify a potential threat. Some T cells circulate throughout the body, but most reside in the lymph nodes, waiting to be activated to react to danger. When a threat is detected, T cells multiply into a T cell army that hunts down and kills the threatening cells.

While all three types of T cells play important roles in an immune response, cytotoxic T cells are considered the warriors of the immune system. While they are unable to attack foreign invaders (like viruses and bacteria) directly, they are able to target and kill cells of the body that have been infected or show signs of an abnormality. When cytotoxic T cells encounter the specific threat that they are programmed to target, they release molecules that directly damage and kill the threat. T cell attacks are very strong and are one of the best weapons the immune system has against threats in the body. T cells are often considered to be the most important cells involved in the immune response against cancer, and in cancer immunotherapy, many treatment options are focused on enhancing T cell responses.

T cells use structures on their surface, aptly called T cell receptors (TCRs) to very specifically recognize abnormal or unfamiliar molecules called antigens, which might be present on invading or unhealthy target cells. Each T cell receptor recognizes one particular antigen. All the receptors on an individual T cell are identical, but differ from the receptors on all the other T cells. With millions of T cells in the body, as a group, these highly specific cells can recognize virtually any molecule that enters the body.

When an individual’s immune system is developing early in life, T cells begin to take form. Early T cells encounter common or “normal” molecules in the body, and any T cells that recognize these common “self” molecules die off, leaving behind only the T cells that respond to “other” molecules. This process essentially trains a person’s immune system so that it does not react to normal molecules in the body, while leaving behind a massive army of T cells capable of recognizing “foreign” molecules, or molecules that are out of the ordinary. Some of these T cells circulate in blood and tissues, but most lie in wait in the lymph nodes until something comes along to activate them.

A wide variety of immune cells patrol the body, searching for any signs of a threat. These cells can identify unfamiliar patterns in their environment, including patterns that might identify invaders, tissue damage, or cancer. When a potential threat is detected, antigen-presenting cells like dendritic cells “eat” cells or debris at the site of the threat, collecting antigens in the process. They are then able to break down what they’ve eaten and carry harmless, representative pieces of the antigens as they migrate to nearby lymph nodes – small, bean-shaped organs that are located throughout the body. 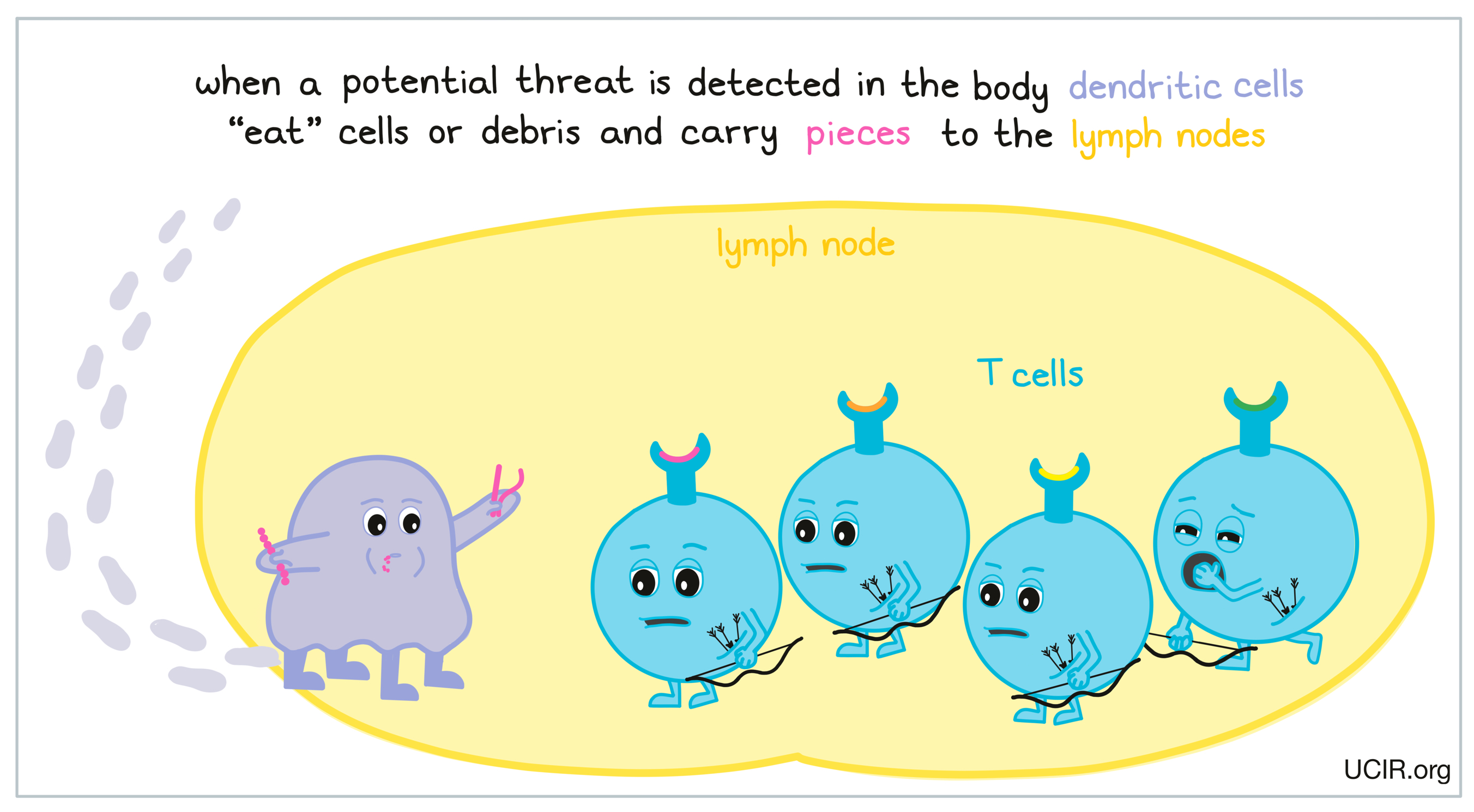 In the lymph nodes, T cells lie in wait, ready to launch an attack if evidence of a threat is presented to them. When antigen-presenting cells present the pieces of antigens they’ve collected as evidence of a potential threat, T cells with the T cell receptors that match up with the specific antigens will begin to become activated. This match up between the antigen and the T cell receptor sends the first “go” signal for T cell activation. However, T cells need to reach a certain threshold of “go” signals before they are ready to launch an attack. 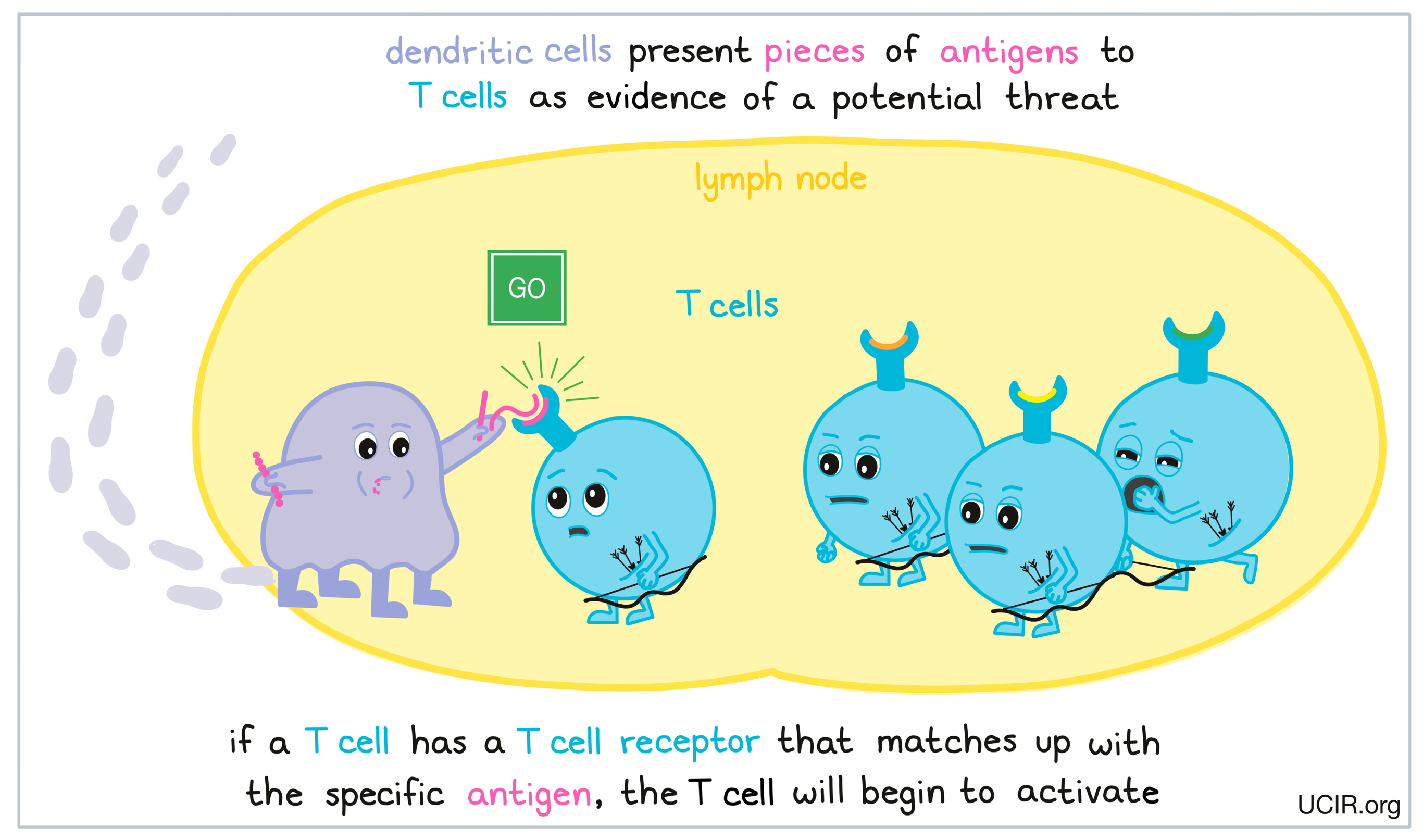 Antigen recognition begins the process of T cell activation, but many signals are required to nudge the T cells fully into action. One major signal is directly provided by the antigen-presenting cells through molecules on its surface called CD80 and CD86. These molecules match up with receptors called CD28 on the T cell surface to provide a “go” signal. If a T cell receives enough “go” signals through the CD28 receptors, it will become more activated, and will be ready to launch an attack. 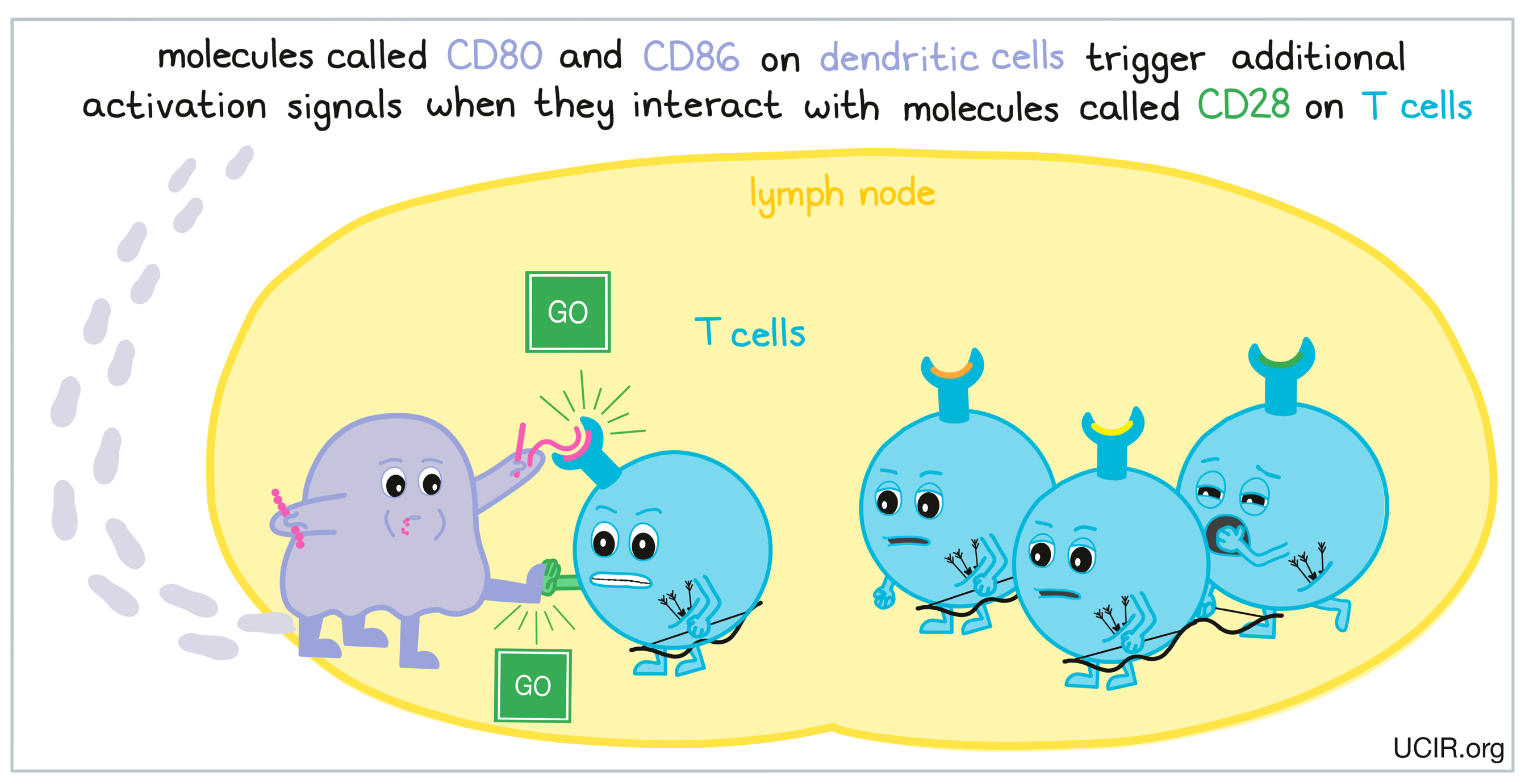 While the CD28 receptor on T cells provides “go” signals, T cells also have built-in systems called “checkpoints”, which essentially send “stop” signals to prevent T cells from overreacting. These “go” and “stop” signals counterbalance one another and control whether a T cell becomes activated, and the extent of the T cell activation. One important “stop” signal is provided by a receptor called CTLA-4.

As the T cell becomes more activated, it increases production of CTLA-4, which is then present on the T cell surface alongside CD28. These two molecules look very similar, and compete with one another for interactions with CD80 and CD86 on dendritic cells. While CD28 delivers “go” signals, CTLA-4 delivers “stop” signals. If the “stop” signals outweigh the “go” signals, then T cell activation may be limited or prevented. 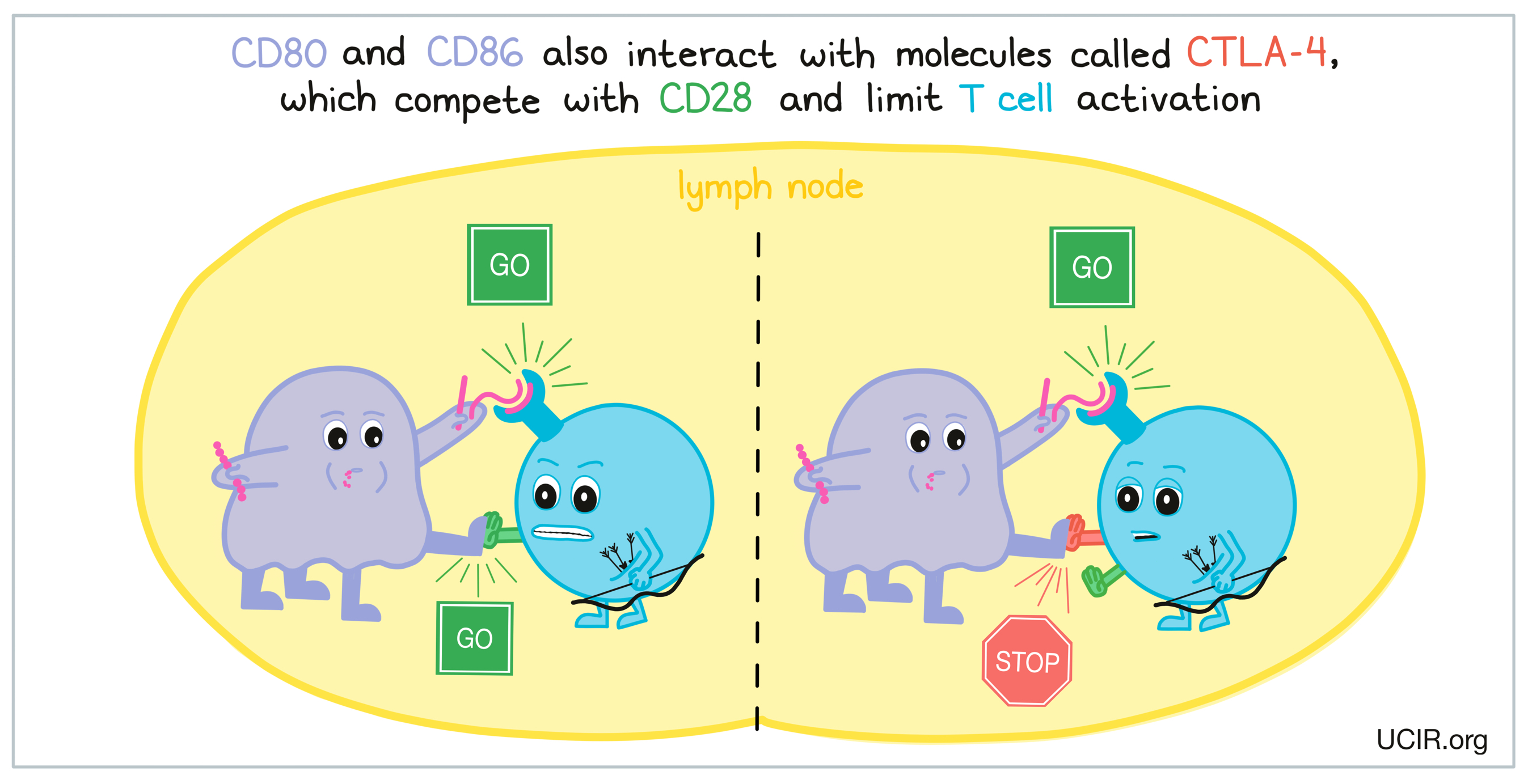 Once a T cell becomes sufficiently activated, it will begin to rapidly multiply, forming an army of T cell clones – all identical and able to recognize the exact same target. These T cells then leave the lymph nodes and begin to spread out throughout the body in order to hunt and attack the specific threat that they recognize. 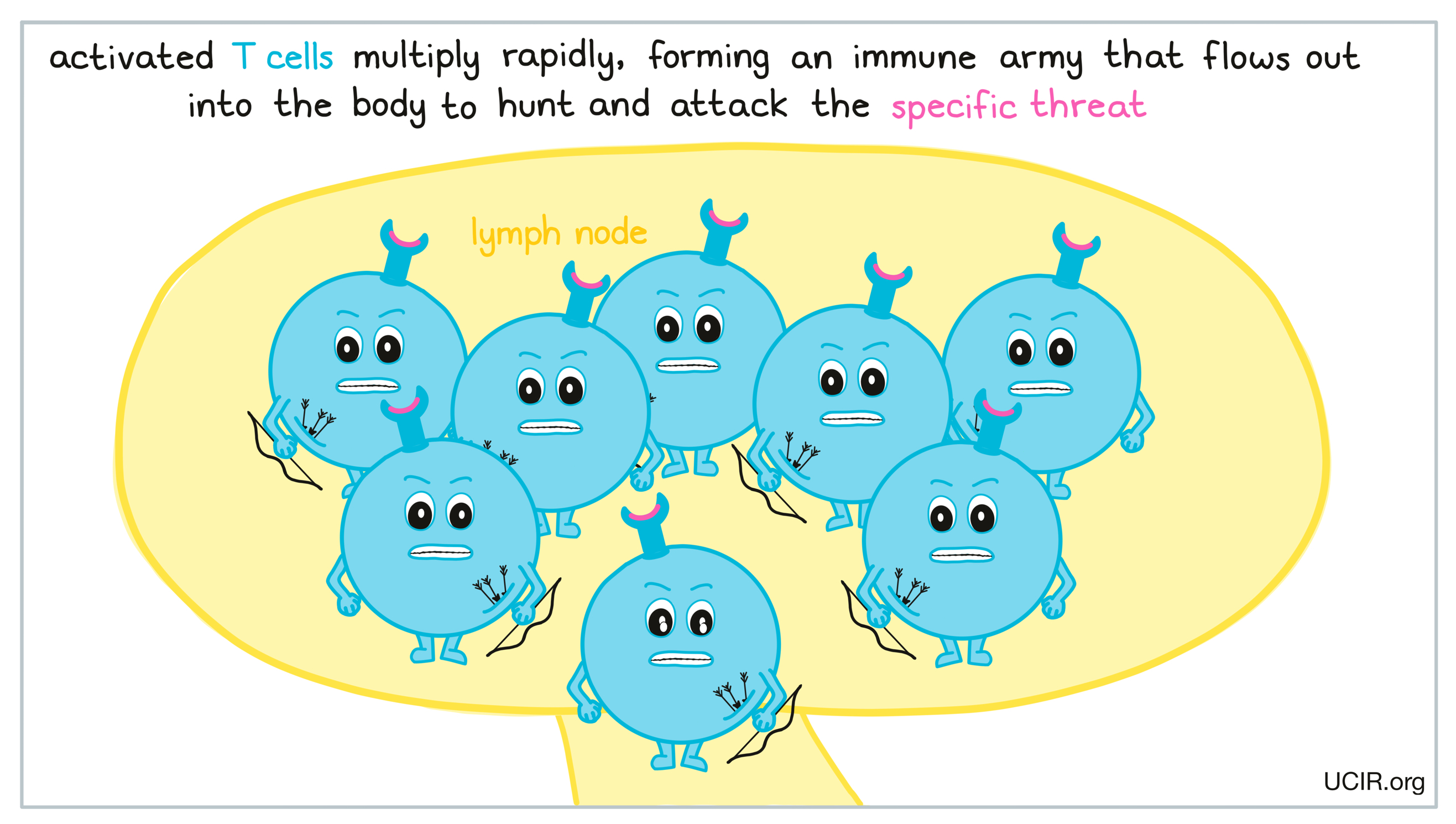 When cytotoxic T cells encounter the antigens that they are programmed to target, they release molecules that directly damage and kill target cells. T cell attacks are very strong and are often considered the best weapon against threats that have affected cells of the body. 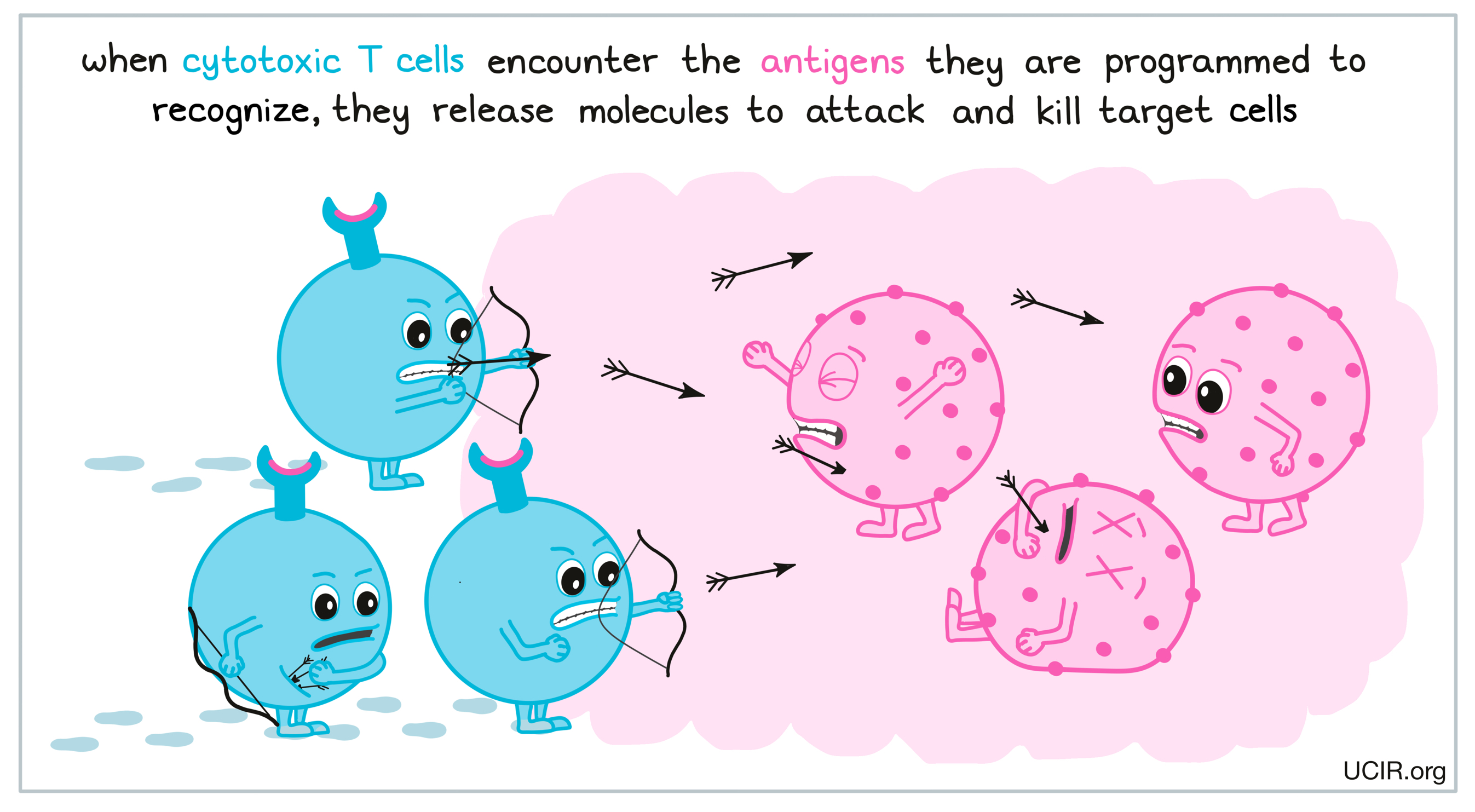 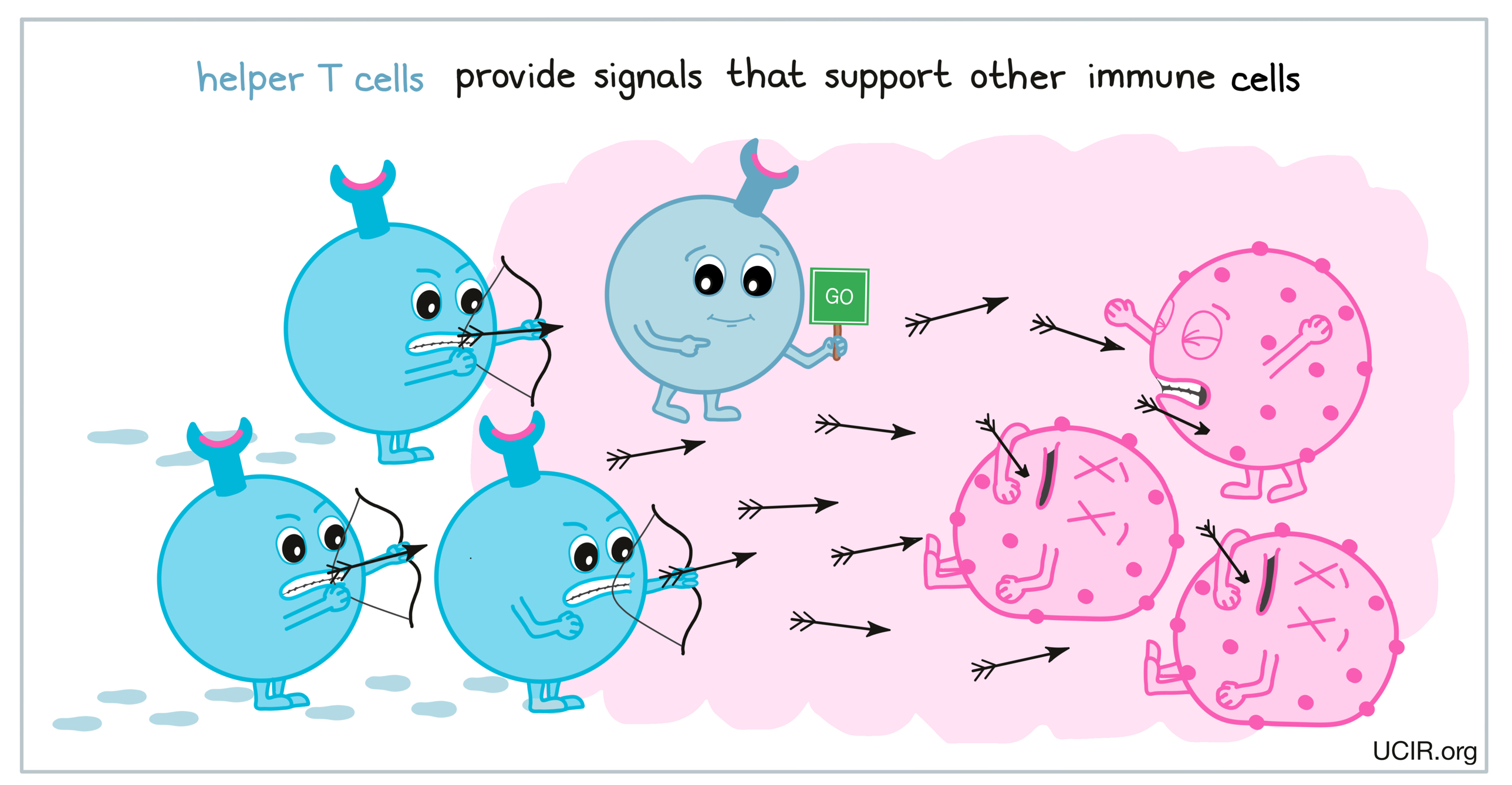 When regulatory T cells are activated, they multiply and spread out in search of their target molecules in the same manner as cytotoxic T cells and helper T cells, however, their role once they find their target is much different. Rather than supporting immune responses, regulatory T cells help to slow down or suppress immune responses. This is important in preventing immune attacks from being misguided to healthy cells, getting out of control, or going on for too long, since this could lead to unnecessary damage to the healthy tissue surrounding the site of the threatening cells. 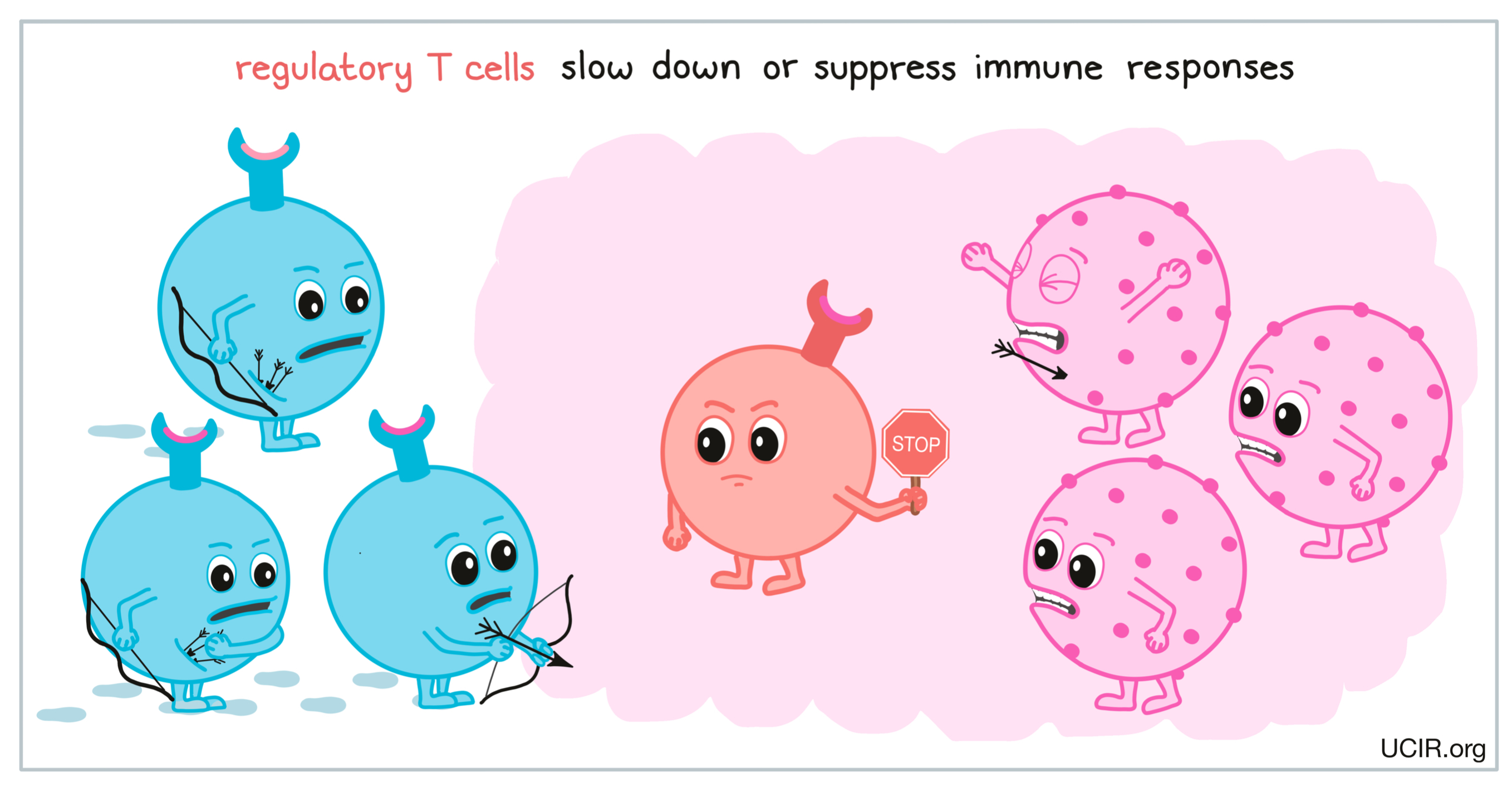 Cytotoxic T cells also have other built-in checkpoints that tell them to slow down or stop attacking a threat. One such checkpoint is the PD-1 receptor, which begins to appear on the surfaces of T cells after they have been activated. PD-1 acts like a set of brakes on the T cell, which can be pressed by another molecule, PD-L1 (or in some cases, PD-L2). Cells that are under an immune attack often respond by increasing production of PD-L1, which then appears on the cell surface as a defensive mechanism. When a T cell with PD-1 on its surface runs into a cell with PD-L1 on its surface, the brakes get pressed and the T cell begins to slow down until it eventually becomes exhausted or dysfunctional and stops attacking. 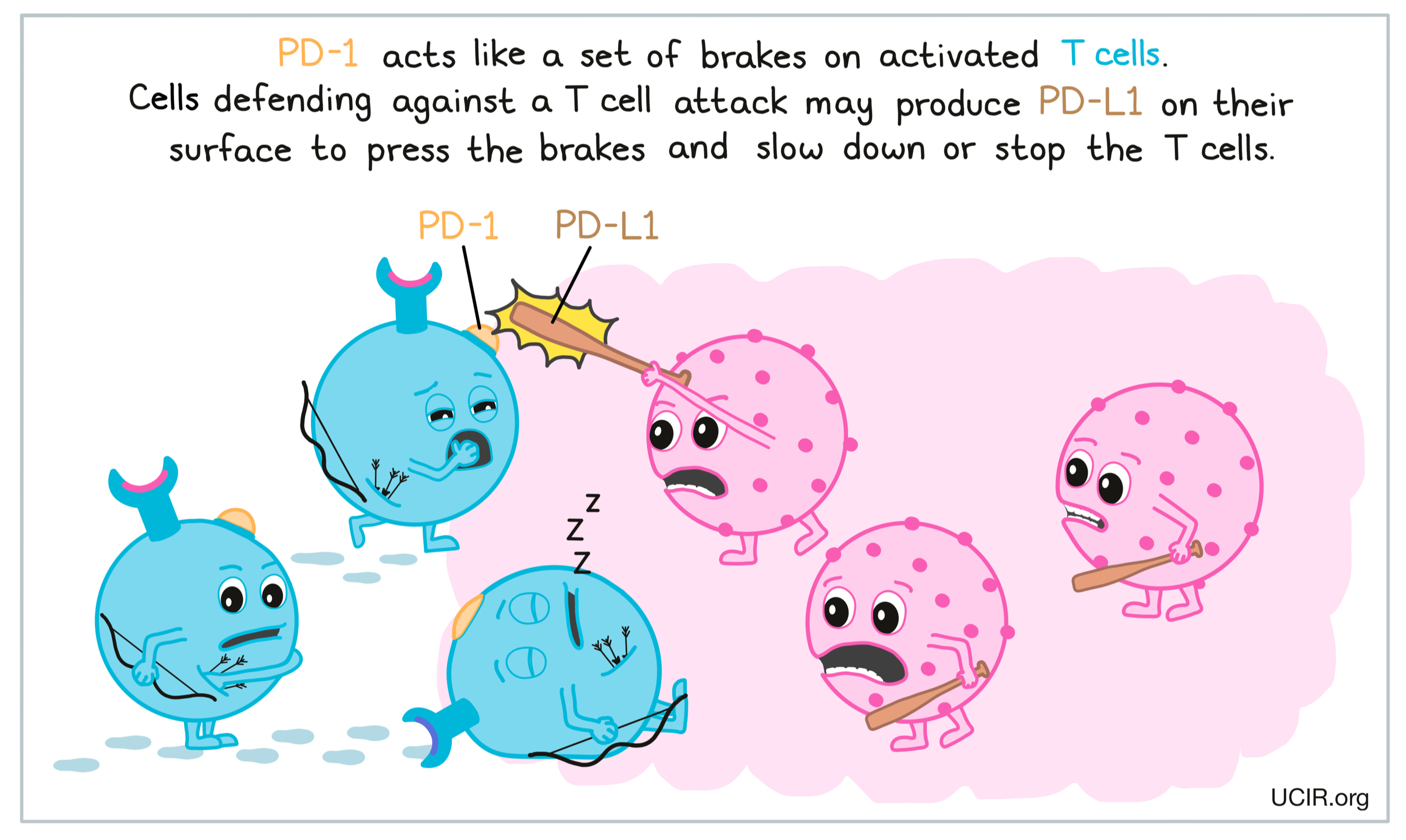 The PD-1 checkpoint plays an important role in slowing down and eventually stopping an active T cell response once a threat has been cleared from the body. However, cancer cells (and other cells that help the cancer to survive and grow) are notorious for taking advantage of this natural checkpoint, and produce high amounts of PD-L1 as a defense mechanism. In cancer immunotherapy, blocking PD-1 or PD-L1 is a useful strategy for maintaining strong T cell responses long-term.

Once a threat has been cleared from the body, most T cells die off and are themselves cleared away, but some morph into “memory” T cells that can survive long-term. These cells remain on patrol in the body, and if the same threat is ever encountered again, these cells stand already armed and ready to attack the threat and to quickly reboot a larger immune response.

T cells are often considered to be the most important cells in immune responses against cancer, and many cancer immunotherapies are geared towards inducing or enhancing cytotoxic and helper T cell responses. As mentioned above, several important checkpoint blockades, including CTLA-4 blockade and PD-1/PD-L1 blockades, can be used to enhance T cell responses against cancer. Another type of therapy that involves T cells is appropriately called T cell therapy. T cell therapy involves collecting some of a patient’s own T cells from their body, growing them in a laboratory to increase their numbers, and then delivering high numbers of T cells back into the patient. In some cases, the T cells may also be modified in the laboratory to enhance their cancer-killing functions. Additional therapies, including oncolytic viruses, certain cancer vaccines, and some antibody therapies also work to enhance T cell responses to cancer, either directly or indirectly.