What is cancer immunotherapy?

Cancer immunotherapy is a type of treatment for cancer that involves harnessing a patient’s immune system, which has a natural ability to defend the body against infection, and against abnormal or cancerous cells. Strategies for immunotherapies vary widely, but all of them interact with the patient’s immune system in some way. Some immunotherapies boost existing immune responses against cancer cells, others trigger new immune responses to cancer, and still others work by adding cancer-fighting immune components to the body.

How does the immune system interact with cancer?

The immune system is the human body’s natural defense system. It is a complex network of organs, cells, and molecules or signals that can be found throughout the body. As a whole, the immune system’s role is to keep out or eliminate cells or molecules that do not belong in the body, including harmful bacteria, viruses, dead or damaged cells, and abnormal or cancerous cells.

A critical aspect of the immune system is its ability to tell the difference between what belongs in the body and what doesn’t. During an infection, “danger signals” from viruses, bacteria, or damaged cells begin to arise, indicating the presence of a potential threat. This can trigger a specific immune response against molecules that seem out of the ordinary to the immune system; these abnormal or unfamiliar molecules are referred to as antigens. Harmful bacteria and viruses usually carry a variety of antigens and are easily recognized by the immune system. Cancer, on the other hand, can be a little more difficult for the immune system to identify.

Cancer arises when mutations occur in normal cells that cause them to thrive and multiply out of control. For the immune system to recognize and respond against cancer cells, the cancer must be producing antigens and “danger signals” of some kind.

Because of their mutations, cancer cells often produce unusually high amounts of certain molecules that help them survive and multiply. While these types of molecules may be familiar to the body, the unusually high levels might catch the immune system’s attention and could trigger a weak immune response. These unusually abundant molecules are considered cancer-associated antigens. In other cases, mutations in cancer cells may cause them to produce mutated versions of molecules, which would be entirely unfamiliar to the body and would likely be recognized by the immune system. In such a case, these mutated molecules are considered neoantigens. Neoantigens are particularly promising targets for immunotherapy, as they are entirely unique to the cancer and are not found anywhere else in the body. 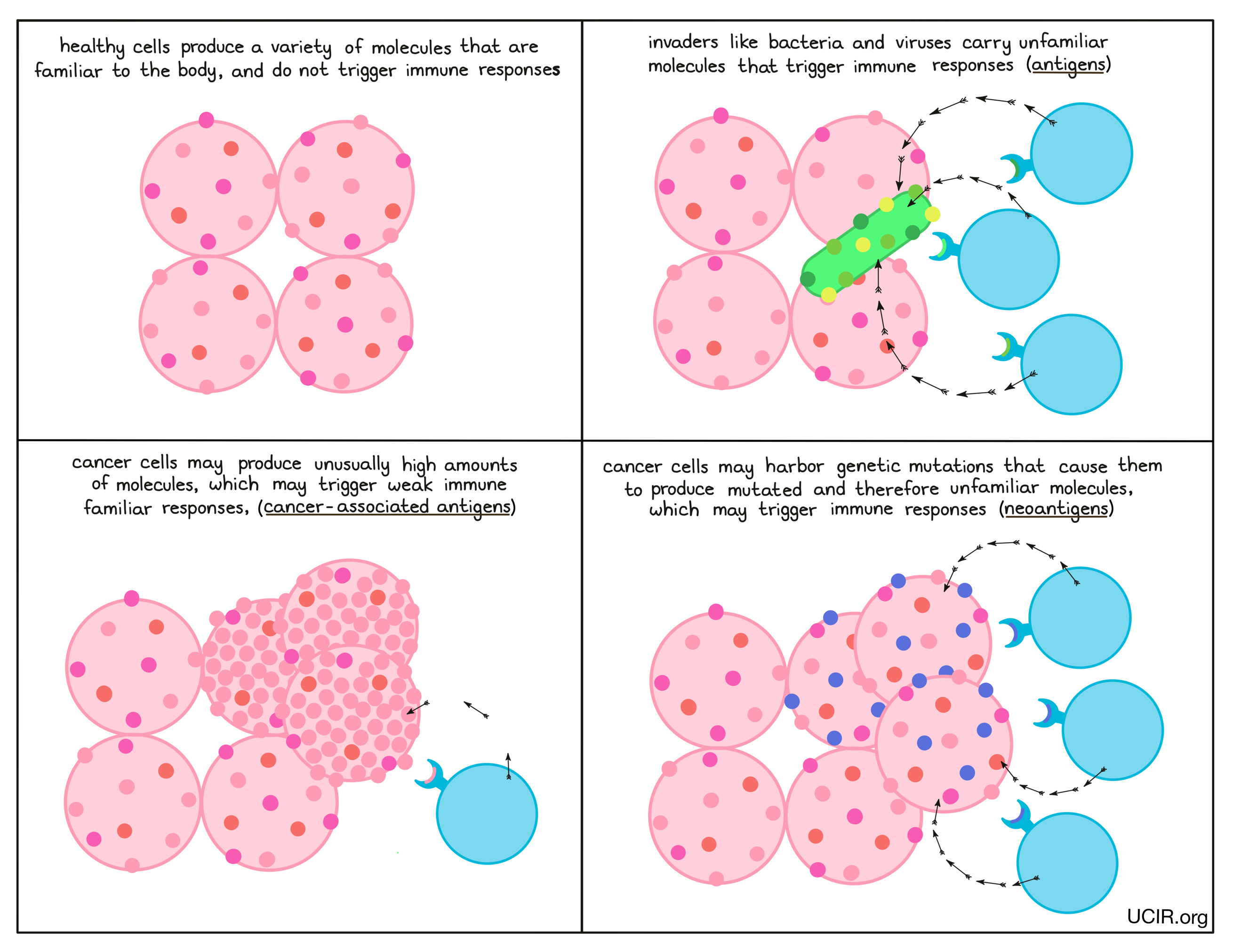 Mutations in cells are common, and cells that have the potential to become cancerous are often caught and killed by the immune system before they ever cause any problems. However, cancer cells that slip past early immune surveillance can be highly adaptable, and may find ways to evade or defend against the immune system.

Since not all cancer cells are the same, some cancer cells may produce markers that the immune system recognizes as unfamiliar, while others will not. In cases like these, the cells that are recognized by the immune system may be caught and killed, while other cancerous cells may be able to escape undetected (a process called immunoediting) and continue multiplying. Cancer cells that form tumors may also start producing molecules to defend themselves from attacking immune cells, creating a local environment that is inhospitable for immune cells. They may also recruit certain cells, including other immune cells, to help protect them. They may also take advantage of immune checkpoints – built-in systems that turn immune cells off. 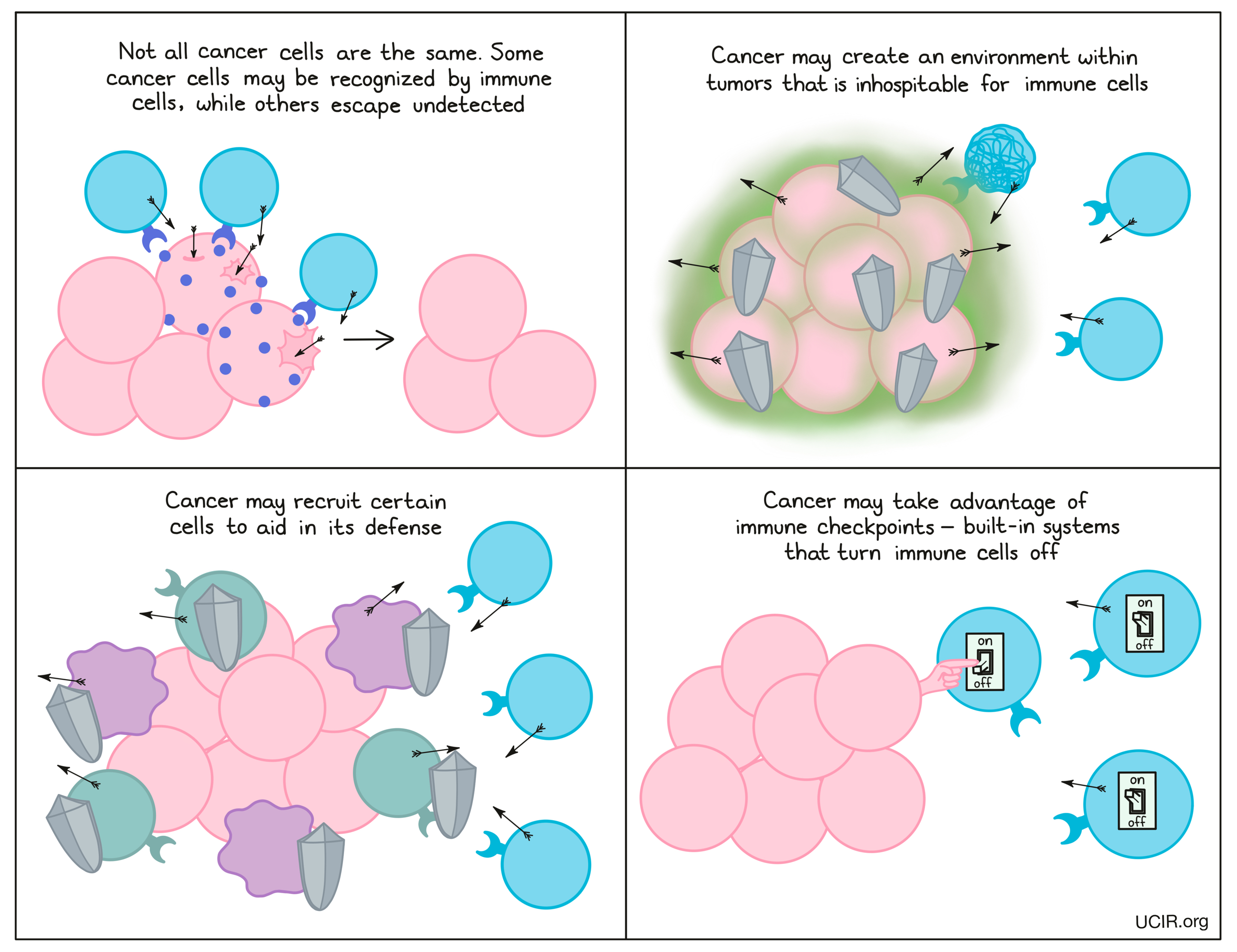 If cancer cells are able to sneak past or beat the immune system, they will continue to increase in number and thrive in a person’s body, which can ultimately have severe health consequences.

What is the goal of cancer immunotherapy?

The goal of cancer immunotherapy is to take advantage of or enhance the immune system’s natural ability to fight cancer. In some cancer types, immunotherapy has already been proven to be highly effective. For a few cancer types, it is even used as the first line of therapy, meaning that a patient might receive a course of immunotherapy as their first treatment option, either alone or in combination with other strategies like surgery, chemotherapy, or radiation.

While cancer immunotherapy is promising in some patients, it has been less effective in others. Current research goals are aimed at improving immunotherapy, which includes improving its effectiveness, increasing the number of patients who can be effectively treated, extending success to patients with different cancer types, and reducing any harmful side effects. There is great enthusiasm and hope that as cancer immunotherapy develops, it can be used to improve, lengthen, and save the lives of patients worldwide.

Lesson 2 - Getting to know the immune system