Age: The safety and efficacy of Lumoxiti in patients under 18 years of age have not been established.
Exclusions: Lumoxiti is not recommended for patients with severe kidney problems.
Pregnancy/Breastfeeding: Lumoxiti may cause harm to the pregnant woman and to the fetus, and is not recommended for use during pregnancy. Women are advised to use contraception during treatment with Lumoxiti and for at least 30 days after the last dose of Lumoxiti. The risks associated with Lumoxiti during breastfeeding are not known and cannot be ruled out. Due to the potential for serious adverse reactions in the breastfed child, women are advised not to breastfeed during treatment with Lumoxiti.

Lumoxiti is a two-part protein that consists of a cell poison and the binding portion of an antibody that attaches to a molecule called CD22 on the surface of hairy cell leukemia cells. The cell poison is a protein obtained from a bacterium and is a toxin.

CD22 is present on the surface of most B cells, and in a healthy person, it regulates the immune response, preventing B cells from getting out of control and guarding against the development of autoimmune diseases. In hairy cell leukemia, which is a B cell cancer, the cancerous B cells display CD22 on their surface at levels that are much higher than those found on healthy B cells. When Lumoxiti enters the hairy cell leukemia cell, the toxin part of Lumoxiti is released and becomes activated, preventing the cell from making essential proteins and leading to cell death. 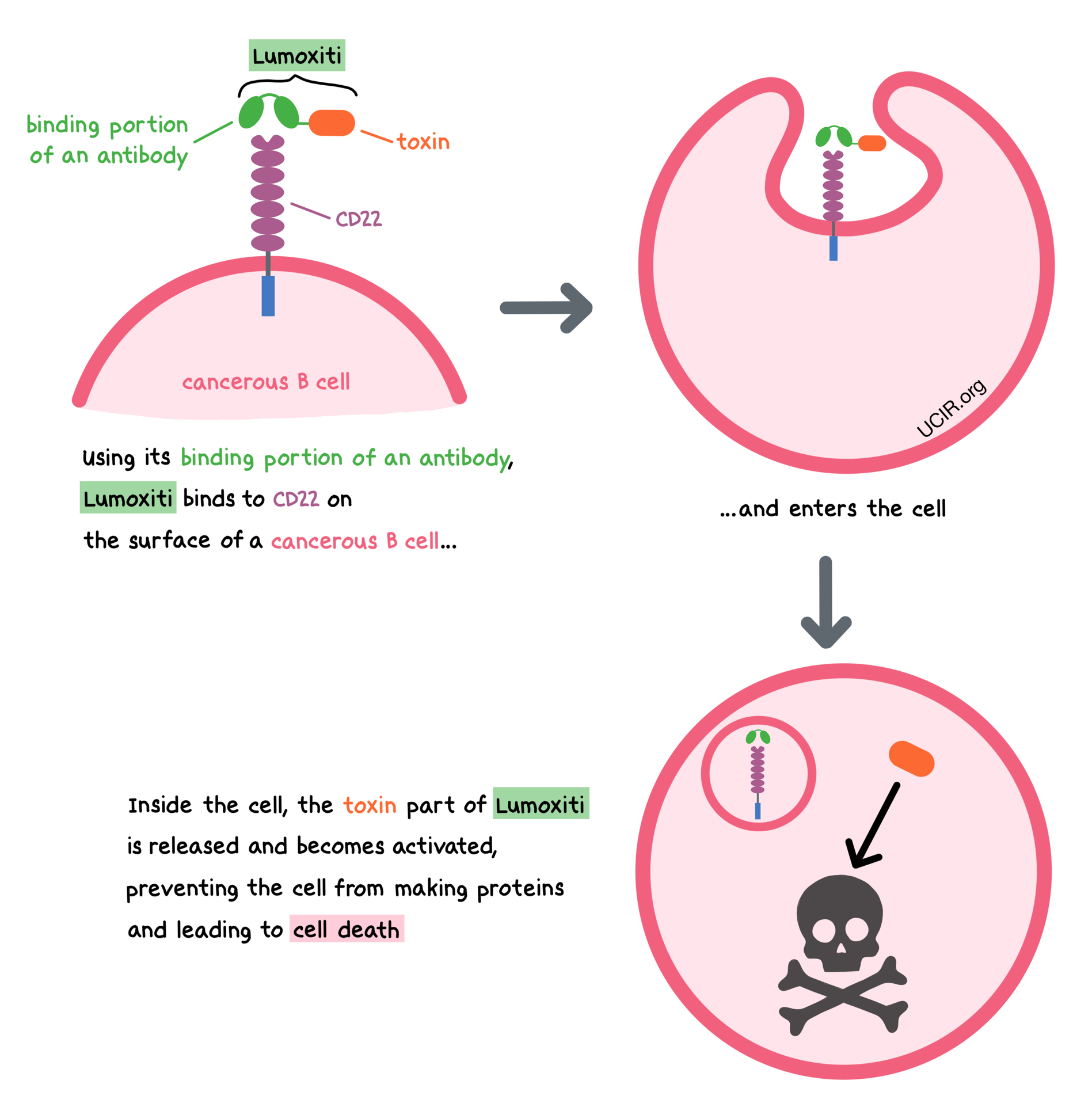 Lumoxiti is administered via a tube into a vein (intravenous infusion, or I.V.) over 30 minutes on days 1, 3, and 5, followed by 23 days without treatment. Each 28 day (4 week) period is one treatment “cycle”, and there can be a maximum of six cycles. Infusion of Lumoxiti does not require a hospital stay.

Before and after each administration of Lumoxiti, patients receive a hydrating solution via a tube in the vein over 2-4 hours. In addition, patients are advised to hydrate orally with up to 2 or 3 liters of fluids (such as water, milk, or juice) per day (depending on the patient’s weight) for the first eight days of each treatment cycle. Patients will be monitored for fluid balance and electrolytes.

Patients may also receive low-dose aspirin during the first eight days of each treatment cycle in order to prevent blood clots.

Prior to each administration of Lumoxiti, patients receive several pre-medications to help reduce the chance of a reaction to the infusion:

Prior to each administration of Lumoxiti, the healthcare provider will measure the patient’s weight and blood pressure, and may take blood to count blood cells and to check how well the kidneys are working.

Patients may receive oral antihistamines and fever reducers for up to 24 hours after each infusion of Lumoxiti. Patients may also receive an oral corticosteroid to reduce nausea and vomiting. 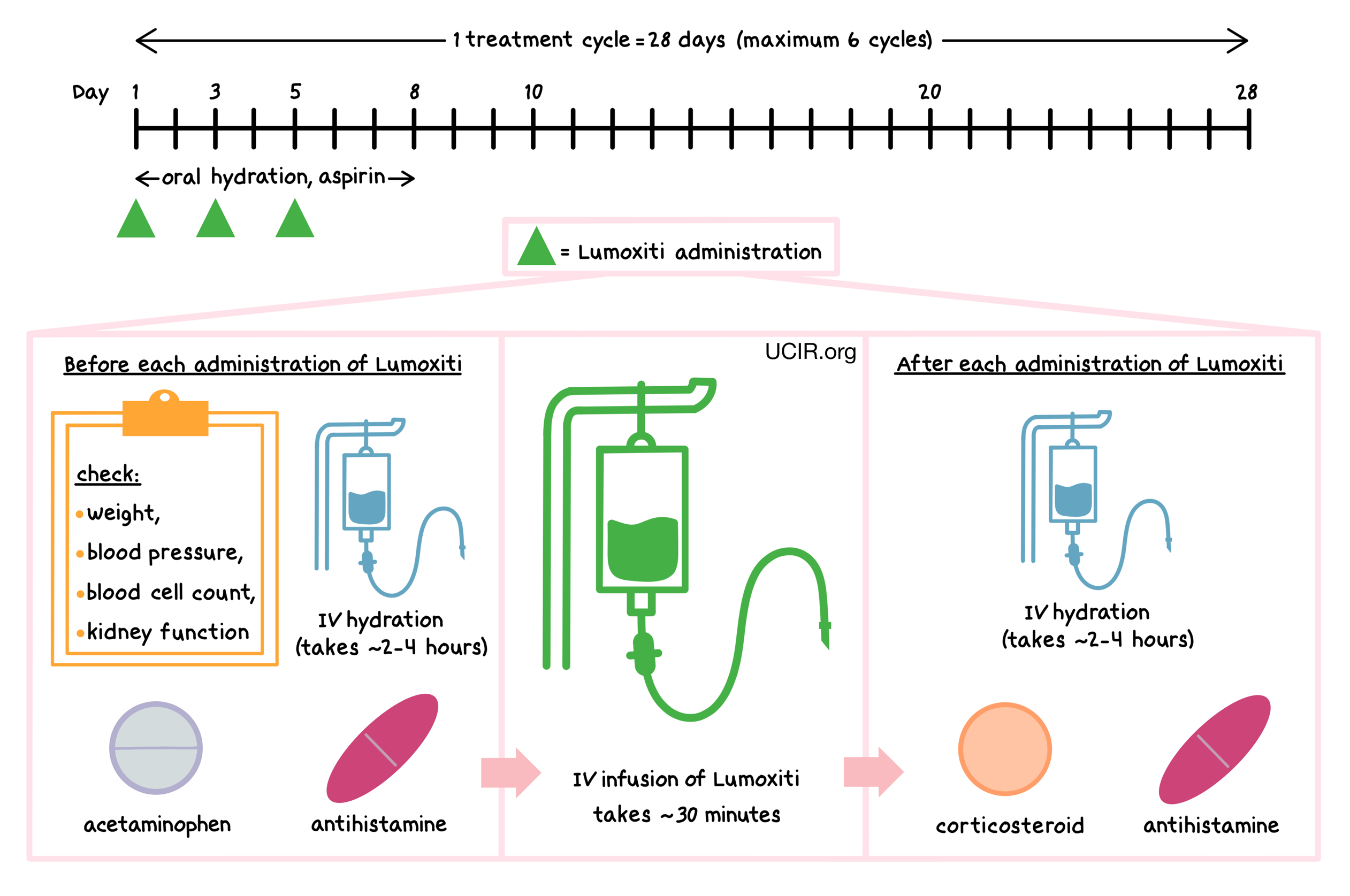 In a clinical trial, 80 patients with hairy cell leukemia who had received at least two prior therapies, including a purine nucleoside analog, and the treatment either did not work, or it stopped working and the disease came back, were treated with Lumoxiti. At a median follow-up of 17 months:

The most common side effects of Lumoxiti include nausea, diarrhea, constipation, fatigue, headache, fever, low red blood cell count, and swelling in the face, arms, or legs.

Lumoxiti can cause side effects that can become serious or life-threatening, and may lead to death. Some of the serious side effects related to Lumoxiti include kidney problems (including kidney failure), reactions related to the infusion, abnormal levels of electrolytes (most commonly low levels of calcium in the blood), Capillary Leak Syndrome, and Hemolytic Uremic Syndrome. Patients should report any symptoms to their healthcare provider, who can then initiate actions to limit or reverse the side effects.

Lumoxiti may cause fluid to leak from small blood vessels into surrounding tissues, which is a serious, potentially life-threatening condition known as Capillary Leak Syndrome. Symptoms of Capillary Leak Syndrome include low blood pressure, weakness or dizziness, swelling of the face, arms, or legs, fast weight gain (defined as an increase of 5.5 pounds from day 1 of the current treatment cycle), and shortness of breath or trouble breathing.

Lumoxiti may cause Hemolytic Uremic Syndrome, which is a life-threatening condition that leads to the damage of very small blood vessels, destruction of platelets (blood cells involved in clotting), low red blood cell count, and kidney failure. Symptoms of Hemolytic Uremic Syndrome include a decrease in the amount of urine or dark-colored urine, unusual bleeding or bruising of the skin, stomach pain, vomiting, fever, fatigue, changes in mood or behavior, confusion, seizures, shortness of breath, and fast heartbeat.

This drug is no longer approved in Europe.