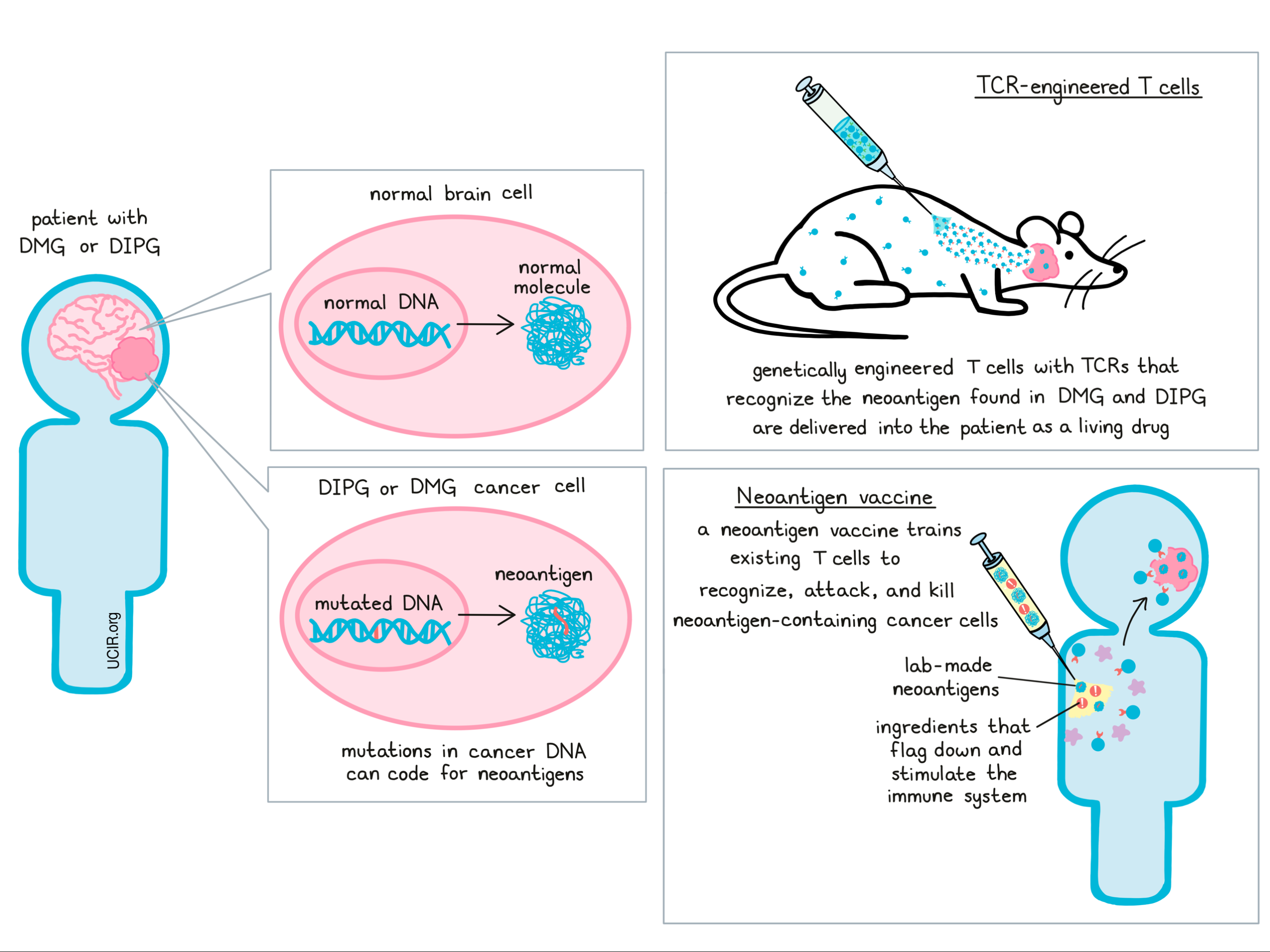 Every battle with cancer is difficult, but cancers that affect children often seem particularly cruel. Diffuse intrinsic pontine glioma (DIPG), and diffuse midline glioma (DMG) are both brain cancers that primarily occur in children. While the outlook for these cancers is grim, new and ongoing research provides glimmers of hope for new potential treatments and cures. One researcher in particular, Dr. Hideho Okada has spent much of his career investigating immunotherapies to fight such malignant brain tumors. Research pioneered by Dr. Okada has led to recent advances in two strategies to targeting these stubborn childhood brain cancers. One is a T cell therapy, and the other is a vaccine, but both share the same target.

The “target” of Dr. Okada’s research is a particular mutation that is found in the majority of patients with DIPG or DGM. Mutations in this gene, known as H3.3K27M, lead to the production of neoantigens – mutated molecules that are produced when cancer cells follow the mutated DNA code. Neoantigens can make great targets for immunotherapy, since these molecules are produced in tumors, but not in healthy tissues. Since these molecules would not have been present before the cancer arose, they would appear as “foreign” to the immune system, and since they are only found in cancer cells, an immune attack against these molecules would be unlikely to harm normal, healthy tissue. There are a number of ways to use immunotherapy to attack these mutated molecules, two of which are T cell therapy using TCR-engineered T cells, and vaccine therapy.

T cell therapy using TCR-engineered T cells is a process that involves identifying T cells - the immune system’s strongest warriors - that are capable of recognizing the H3.3K27M neoantigen that’s found in DIPG. Once a T cell has been identified, researchers can then study that cell’s T cell receptor - the part of the cell that recognizes the target - and recreate it in a lab. These T cell receptors can then be inserted into regular T cells, taken from a patient, to empower those T cells to recognize the neoantigen in DIPG. Additional treatments to these cells can activate them, charging them up so that they’re ready to attack. When given back to patients as a living drug, these cells seek out their target molecule and destroy the cancer cells that carry it. So far, a similar form of T cell therapy known as CAR T cell therapy has proven very effective in humans with certain B cell leukemias, but application to solid tumors like glioma has been disappointing so far. Dr. Okada has proven this strategy to be effective in mice, and in 2019, Dr. Okada’s lab at the University of San Francisco partnered with a company called Tmunity to help bring this promising potential treatment to patients in the clinic.

In addition to developing a T cell therapy targeting the neoantigen found in DIPG, Dr. Okada and his team of researchers also developed a vaccine. Rather than taking cells out of the body, manipulating them, and returning them to the patient, vaccine therapy leaves the immune system in place and retrains immune cells on site. Like most vaccines, this involves creating a version of the target molecule (in this case the H3.3K27M neoantigen) and introducing it to the patient along with a cocktail of ingredients that help to flag down and stimulate the immune system. This trains the immune system to react more strongly against the target, and to attack and kill the cancer cells that carry it.

After proving that this strategy was effective in mice, the Dr. Okada and his team were able to launch a Phase 1 clinical trial to assess the safety of this vaccine and to get a preliminary look at how effective it might be. To begin, newly diagnosed patients ranging from 3 to 21 years old and whose cancer was shown to produce the H3.3K27M neoantigen were enrolled in the trial; 19 of these patients had DIPG and 10 had DMG. These patients received a dose of the vaccine once every 3 weeks until at least 8 doses had been administered, then doses were given once every 6 weeks.

Overall, the vaccine appeared to be safe, with no serious side effects occurring in any of the patients. Using blood samples from patients, the researchers were able to evaluate whether the vaccine was effective in inducing an immune response, and in some patients – ‘immunological responders’ – the vaccine appeared to have worked. In these patients, the median overall survival – a measure of the length of time patients survived after receiving treatment – was higher at 16 months, compared to 10 months in non-responders. This suggests that within this small group of patients, having an immune response to the vaccine may have helped to extend patients’ lives.

Looking for another marker of immune response, the researchers found that patients with lower levels of myeloid-derived suppressor cells – immune cells that help to slow down immune attacks to prevent overreactions – at the start of treatment ultimately lived longer than those who had higher levels of these cells. This indicates that looking at these cell types in a tumor before beginning treatment might predict which patients are most likely to respond to the vaccine therapy.

While the effects of targeting the shared mutation found in many children with DIPG or DMG have not yet been proven in large-scale clinical trials, the early results of efforts by Dr. Hideho Okada and colleagues are promising. Their continued work in the field of treating this rare childhood cancer is one step closer to eliminating this deadly and cruel disease. 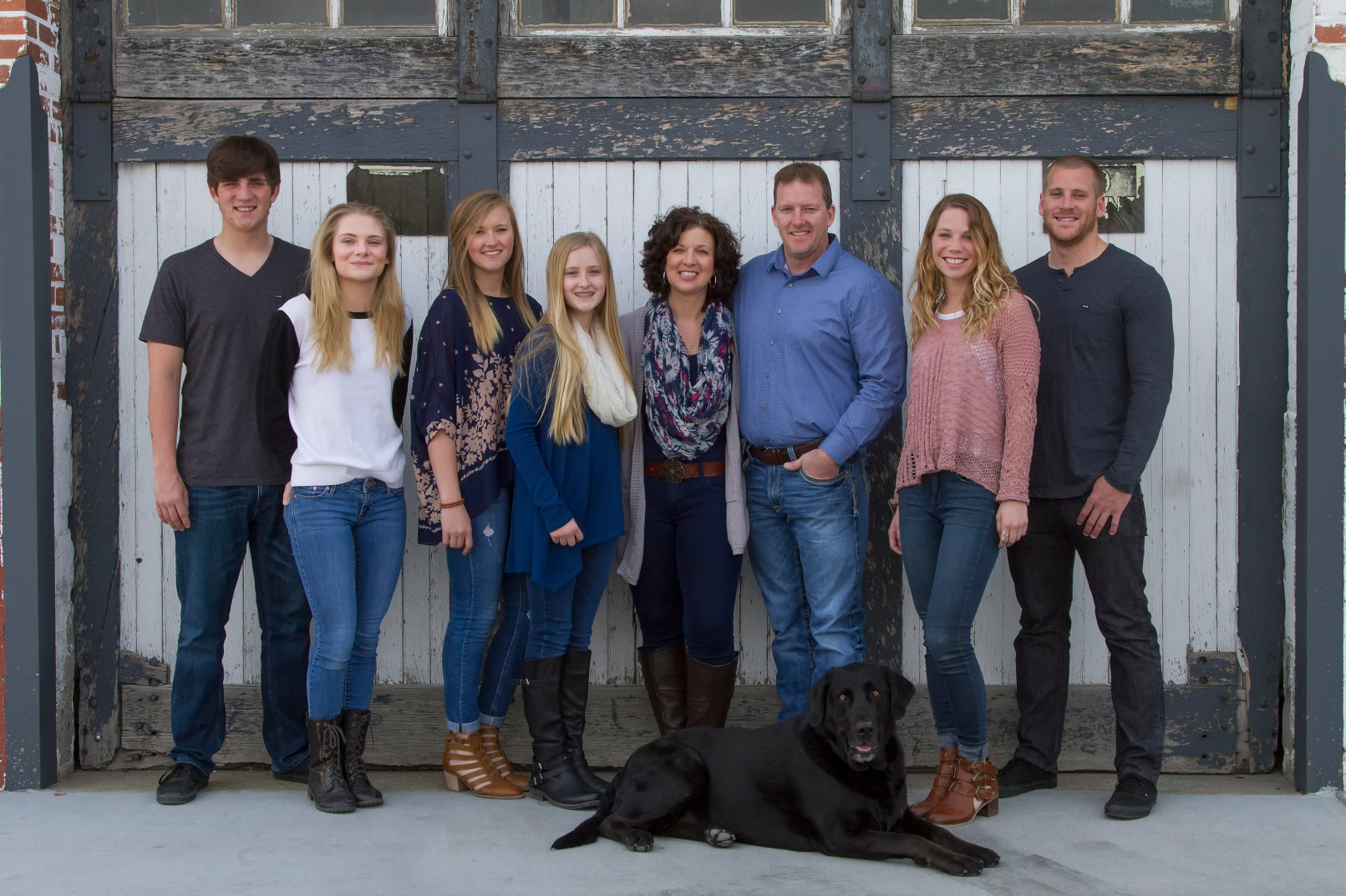 Patient 3737: An Early Story of Success in Cancer Immunotherapy

At the age of 41, Melinda Bachini was diagnosed with widely metastatic cholangiocarcinoma, a rare cancer that begins in the bile ducts. Immediately after diagnosis, she underwent surgery to remove the cancer, and while the doctors thought they had gotten it all, Melinda’s cancer soon reappeared in her lungs. Read her amazing story here.