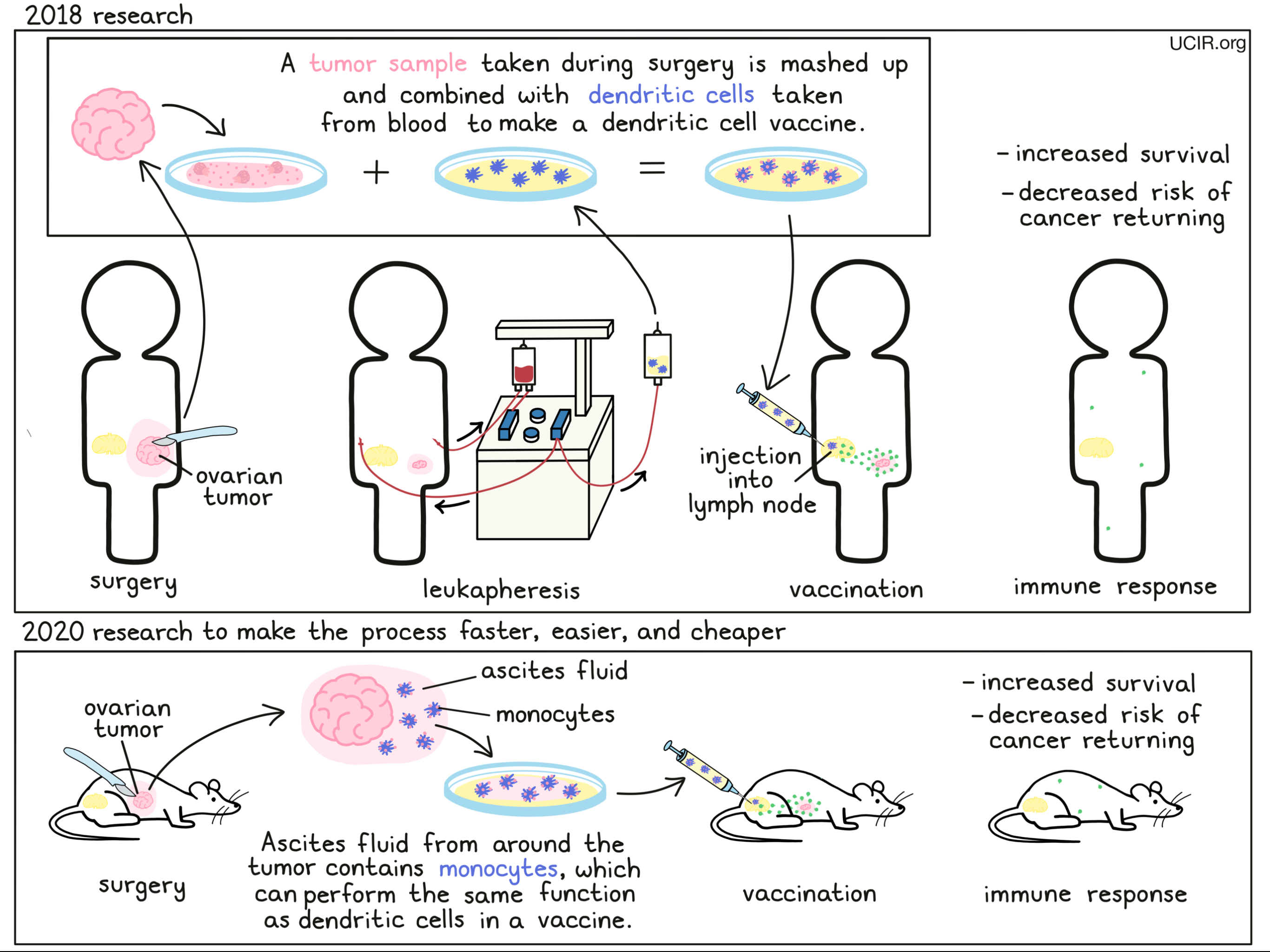 When most people think about vaccines, they think about their important role in preventing contagious illnesses like measles or the flu, but since vaccines work by stimulating the immune system, they are also being investigated as potential cancer immunotherapies. One researcher, Dr. Lana Kandalaft of the Ludwig Institute for Cancer Research in Lausanne, Switzerland, has been hard at work for years developing vaccine strategies to treat ovarian cancer, which is often caught at a late stage. Even ovarian cancers that can be treated successfully with surgery, chemotherapy, radiation, or combination treatments have a high chance of returning – often more stubborn than before – and there is great need for new, more effective treatment options to cure ovarian cancer and keep it from coming back.

Prior to 2018, Dr. Kandalaft, along with Dr. George Coukos and a team of researchers, set out to develop a vaccine to treat ovarian cancer and prevent it from returning. The idea behind a cancer vaccine was that tumors contain recognizable molecules called antigens that are produced by cancer cells, but not normal cells in the body, marking the cancer cells as “different” or “other”.

In a clinical trial, the results of which were published in 2018, this strategy was put to the test. Patients selected for this trial had advanced ovarian cancer that had been previously treated with chemotherapy and had since come back, and had never been treated with any other forms of immunotherapy. The vaccines were prepared using the patient’s own immune cells, as well as samples of their own tumors which had been surgically removed. Using an ultrasound for guidance, the vaccine was delivered directly into one of the patients’ lymph nodes, which harbor many immune cells. Each patient received at least 5 doses of the vaccine, and some patients received the vaccine in combination with certain chemotherapies.

Importantly, the vaccine appeared to be safe, and did not cause any severe side effects in any of the patients who received it. Of the 25 patients treated, 2 patients experienced a partial response (the cancer shrank) and 13 experienced stable disease (the cancer remained the same size) for a median of 14 months. About half of the patients showed evidence of a new or stronger immune response against their cancer after receiving the vaccine, while the other half did not. Some patients even showed new responses to neoantigens – abnormal molecules that are produced exclusively by cancer cells due to genetic mutations.

Patients in a group that received the vaccine in combination with two chemotherapy options showed even better results than patients who received the vaccine alone. “With this combination, not only did it do better in survival, both overall survival and progression-free survival, but it also did better with immune response,” said Dr. Kandalaft, “So we proved our theory that yes, the immune response correlates with survival with this combination.” 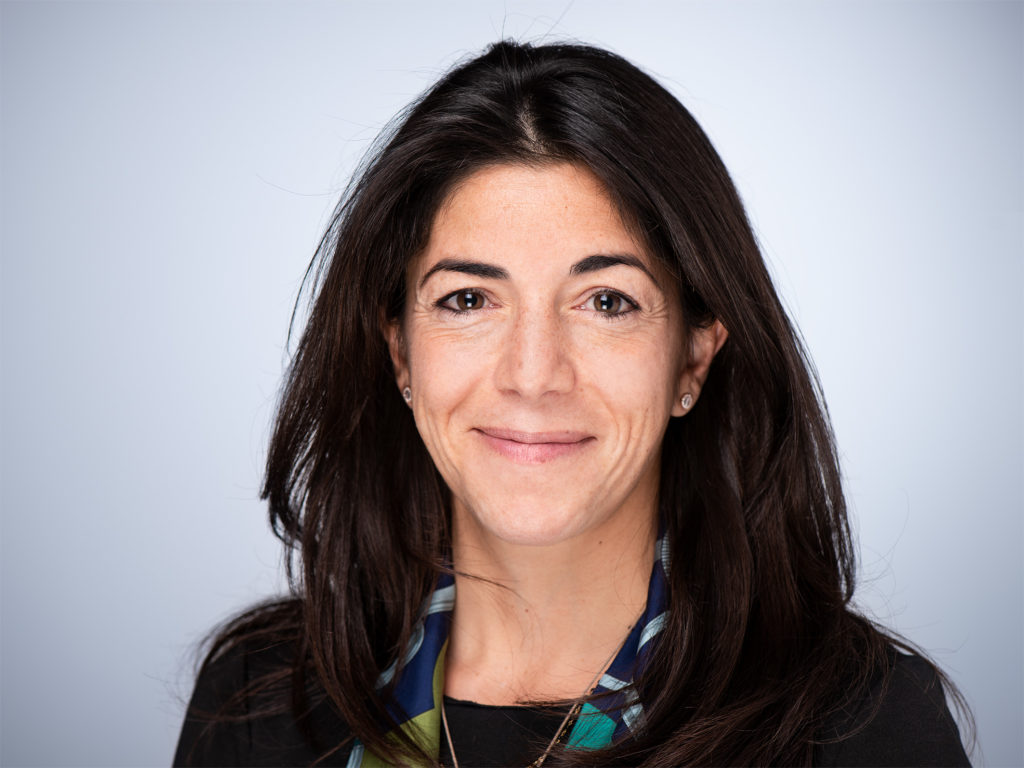 While these results were incredibly promising, this approach does come with several caveats, as well as a hefty price tag. For this vaccine strategy to work, patients must undergo “leukapheresis”, which involves processing the blood from the patient, extracting immune cells from it, and returning the rest of the blood to the patient, all using one machine. The immune cells then need to be treated and multiplied in a lab setting to get a sufficient amount of dendritic cells. Further the patient must also have their tumor removed, preserved and kept alive, separated out into single cells, killed with an acid solution, and then broken open through freezing and thawing, before the tumor can be mixed in with the dendritic cells to create the vaccine. Not every hospital has the capacity to do this, and altogether, the process can be costly and time-consuming.

In order to build on the success of the previous vaccine therapy, while addressing some of its flaws, Dr. Kandalaft is now working on a new strategy. “Moving forward in mouse models, I’m now looking to improve these dendritic cell vaccines, because I don’t think that what we’ve done is enough,” she said. Now, she and her colleagues at the Ludwig Institute for Cancer Research are working on developing a vaccine that works essentially the same way as the dendritic cell vaccine, but that takes advantage of immune cells that are naturally present in “malignant ascites fluid” – fluid buildup in the abdomen due to cancer growth. Previous studies had shown that many of the antigens that identify cancer can also be found in ascites fluid, and that immune cells called monocytes that are present in the ascites fluid, naturally pick up these antigens. In the lab, these monocytes can be treated with ingredients that activate them and enhance their ability to act like dendritic cells and show the tumor antigens to T cells, which would allow them to activate a strong immune response against cancer.

When this strategy was tested in a mouse model of ovarian cancer, the tumor antigen-loaded monocytes induced strong immune responses and effectively suppressed tumors, which extended the length of time that mice survived. These immune responses lasted long-term, protecting the mice by preventing the cancer from returning. “We proved in the mouse that this actually works. Now, translating it to humans, of course, is a different story and a huge step, which we are considering taking,” said Dr. Kandalaft.

To evaluate whether this strategy might translate into humans, the researchers isolated monocytes from ascites fluid from patients with late-stage ovarian cancer who had not yet been treated with chemotherapy. These cells were found to pick up and show the cancer antigens. After being treated for just 48 hours in a lab, these cells were capable of using the tumor antigens to activate T cells that had been found in the patients’ tumors. While this does not prove that this strategy will work in humans, it is promising evidence that it might.

“It’s an exciting project to see because it’s so quick. If we can take these ascites, create a vaccine, and then deliver it almost immediately, just 48 hours after surgery, this might then be able to act as a more preventative approach,” said Dr. Kandalaft, who also hopes to test their vaccine strategy at earlier stages of ovarian cancer treatment. “Right now we are often vaccinating in the recurrent setting, and ideally it would be much better if we could vaccinate in combination with chemotherapy up front, while the patient’s immune system is still healthy and strong, and before any recurrence occurs. This is what we’re doing in our next trial.”

In addition to testing vaccines earlier in treatment, Dr. Kandalaft is also working on ways to genetically engineer dendritic cells to improve their function as vaccines, and is investigating what source of antigens is best to use for a vaccine. With so much research still to come, it is exciting to see how far this strategy will go, and how many patients might benefit. Said Dr. Kandalaft, “It’s a very exciting time in cancer immunotherapy. The field is moving so fast and every day you have something new.” 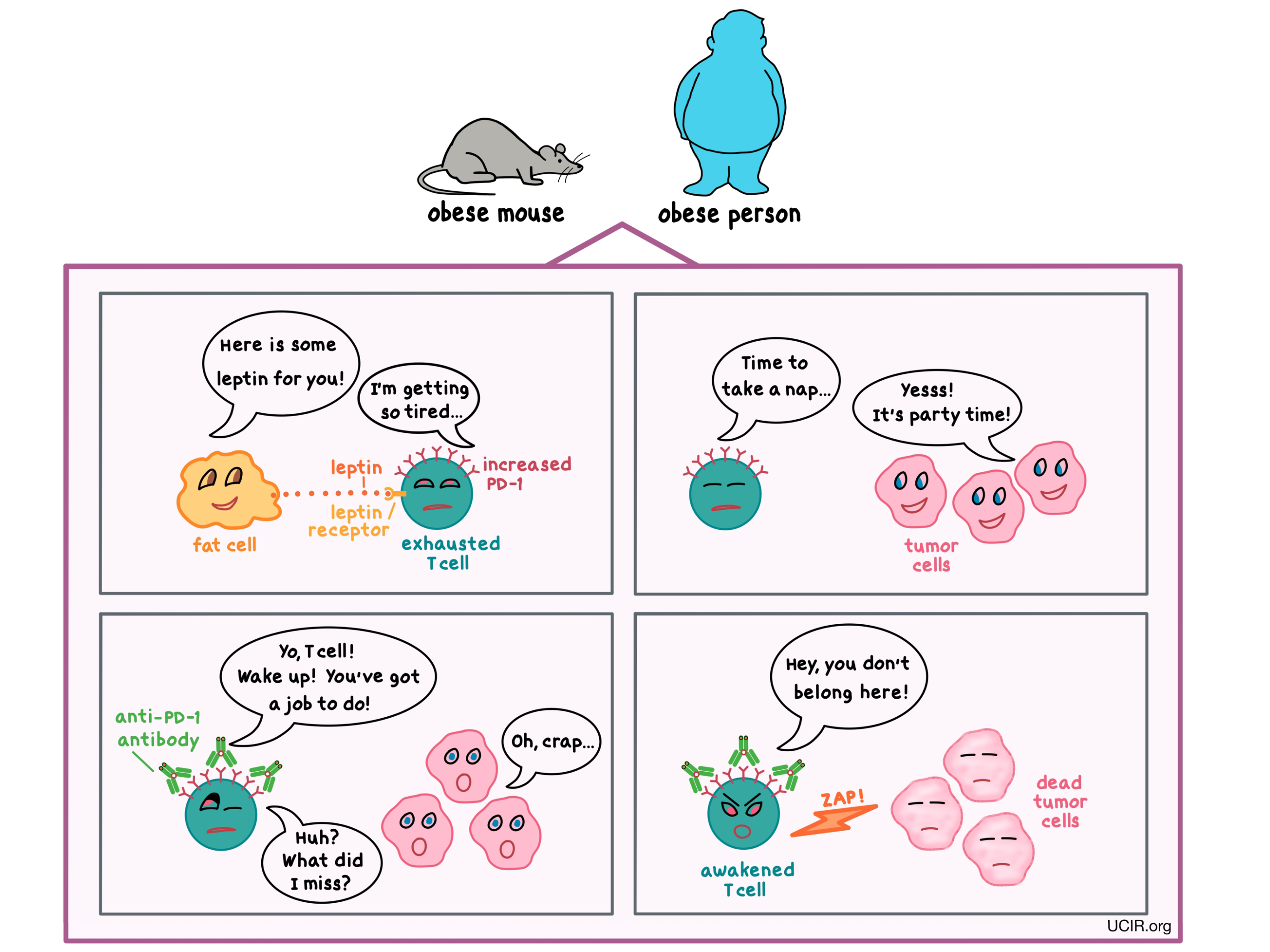 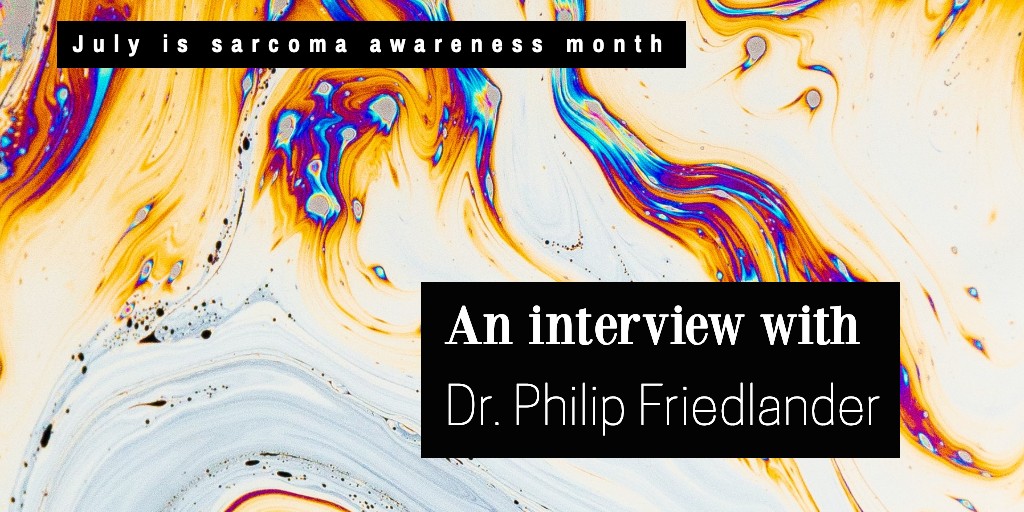