Proleukin is approved for:

Proleukin is approved for:

Age: The safety and efficacy of Proleukin in patients under 18 years of age have not been established.
Exclusions: Proleukin should not be administered to patients with abnormal heart, lung, kidney, liver, or central nervous system functions. Proleukin should not be administered to patients with brain metastases (cancer that has spread to the brain). Proleukin should not be administered to patients who have received an organ transplant (allograft). If patients develop severe sleepiness, continued treatment with Proleukin may result in a coma, and thus should be discontinued.
Fertility/Pregnancy/Breastfeeding: Proleukin can cause harm to a mother and fetus, and is not recommended for use during pregnancy. The risks associated with Proleukin during breastfeeding are not known and cannot be ruled out. Due to the potential for serious adverse reactions in the breastfed child, the benefits of breastfeeding and the mother’s need for treatment should be weighed accordingly before moving forward with treatment with Proleukin.
Interaction with other drugs: Proleukin may affect the function of the heart, lung, kidney, liver, or central nervous system. Further damage can occur following administration of associated drugs (e.g., narcotics, analgesics, antiemetics, sedatives, tranquilizers, doxorubicin, aminoglycosides, indomethacin, cytotoxic chemotherapy, methotrexate, asparaginase), which can also affect these organ systems. Proleukin treatment can reduce the kidney and liver function of patients. This may delay clearance of associated medications from the body and may increase the risk of harmful side effects from those drugs.

When Proleukin binds to the IL-2 receptor, it helps activate the T cells and NK cells in order to mount an effective immune attack against cancer. 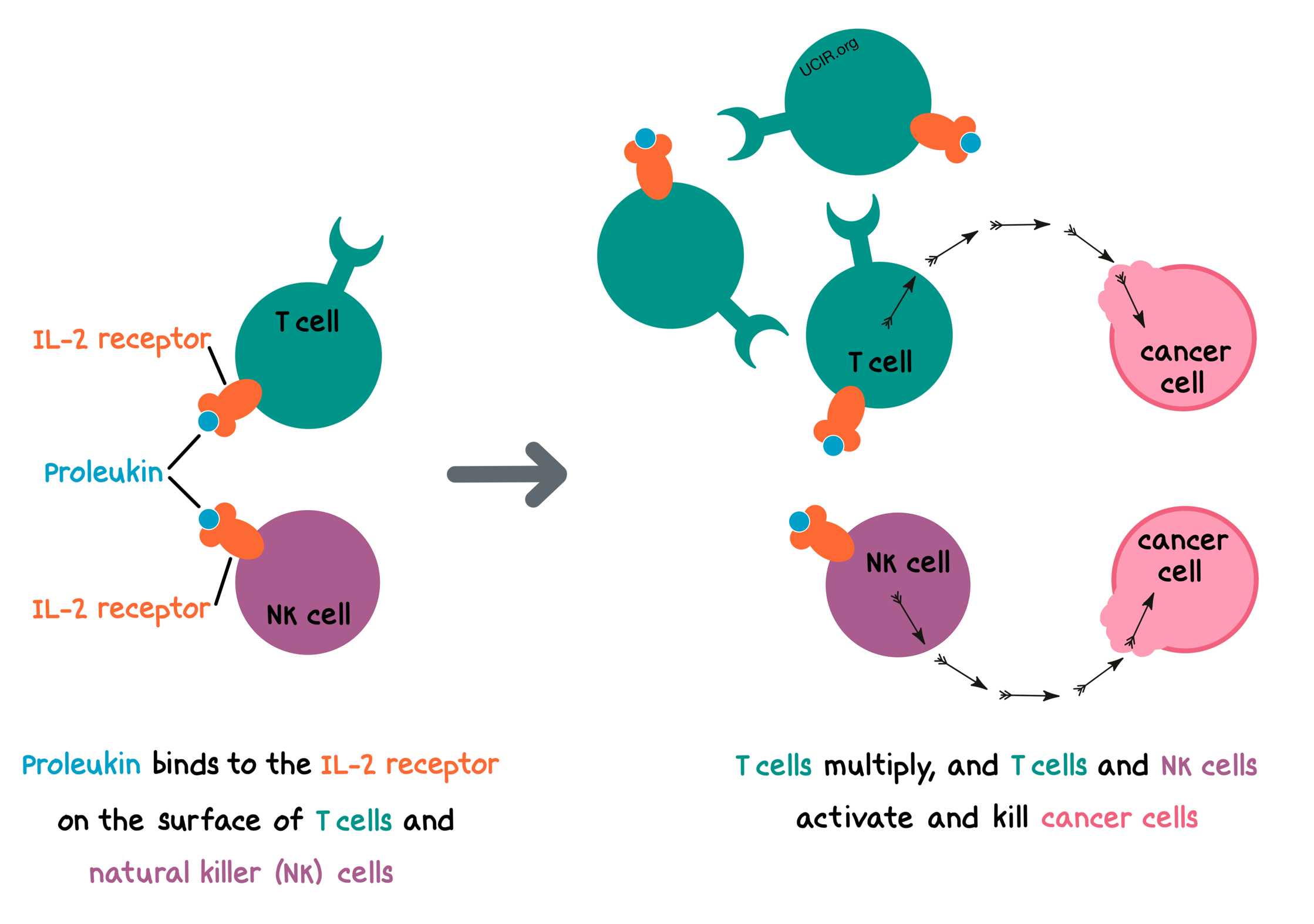 Prior to beginning treatment with Proleukin and then daily during drug administration, patients will get chest x-rays and blood work done, including blood tests for kidney and liver function. The patient’s vital signs (temperature, pulse, blood pressure, and respiration rate), weight, and fluid intake and output will also be monitored daily during Proleukin treatment. In addition, patients will undergo a thorough assessment of the condition of their heart and lungs before starting, and during treatment with Proleukin.

In a clinical trial, 255 patients with renal cell carcinoma (kidney cancer) that had spread to other parts of the body were treated with Proleukin.

In a clinical trial, 270 patients with melanoma that had spread to other parts of the body were treated with Proleukin.

Proleukin can cause side effects that can become serious or life-threatening, and may lead to death. Some of the serious side effects related to Proleukin include decreased or no urine, low blood pressure, breathing problems, stopping breathing, diarrhea, coma, fast heartbeat and other heart problems (including heart attack), sudden kidney failure, clotting problems, confusion, problems with the liver, kidneys, or thyroid, fever, infection (including in the blood), severe sleepiness, severe mental illness, low blood platelet count (which increases the chance of bleeding), and vomiting.

Proleukin can cause capillary leak syndrome (CLS), which begins immediately upon the initiation of treatment with Proleukin. During CLS, proteins and fluid leak out of blood vessels into the surrounding tissues. This could lead to dangerously low blood pressure, which can result in organ failure and death if left untreated. Symptoms that could signal the onset of CLS include fatigue, nausea, abdominal pain, extreme thirst, and sudden increase in body weight.

Patients who have been treated with Proleukin may experience unusual reactions to iodinated contrast media, which is used to visualize vessels and changes in tissues radiography and CT.

US and Europe: Clinigen