Tecartus is approved for:

Age: The safety and efficacy of Tecartus have not been established in patients under 18 years of age.
Fertility/Pregnancy/Breastfeeding: The effects of Tecartus on female and male fertility are not known. Tecartus is not recommended for women who are pregnant and may pose a risk to a developing fetus. The risks associated with Tecartus during breastfeeding are not known and risk to a breastfed infant cannot be excluded.
Effects on the ability to drive and use machines: Patients are advised to refrain from driving, engaging in hazardous occupations or activities, and operating heavy machinery for at least 8 weeks after receiving Tecartus. 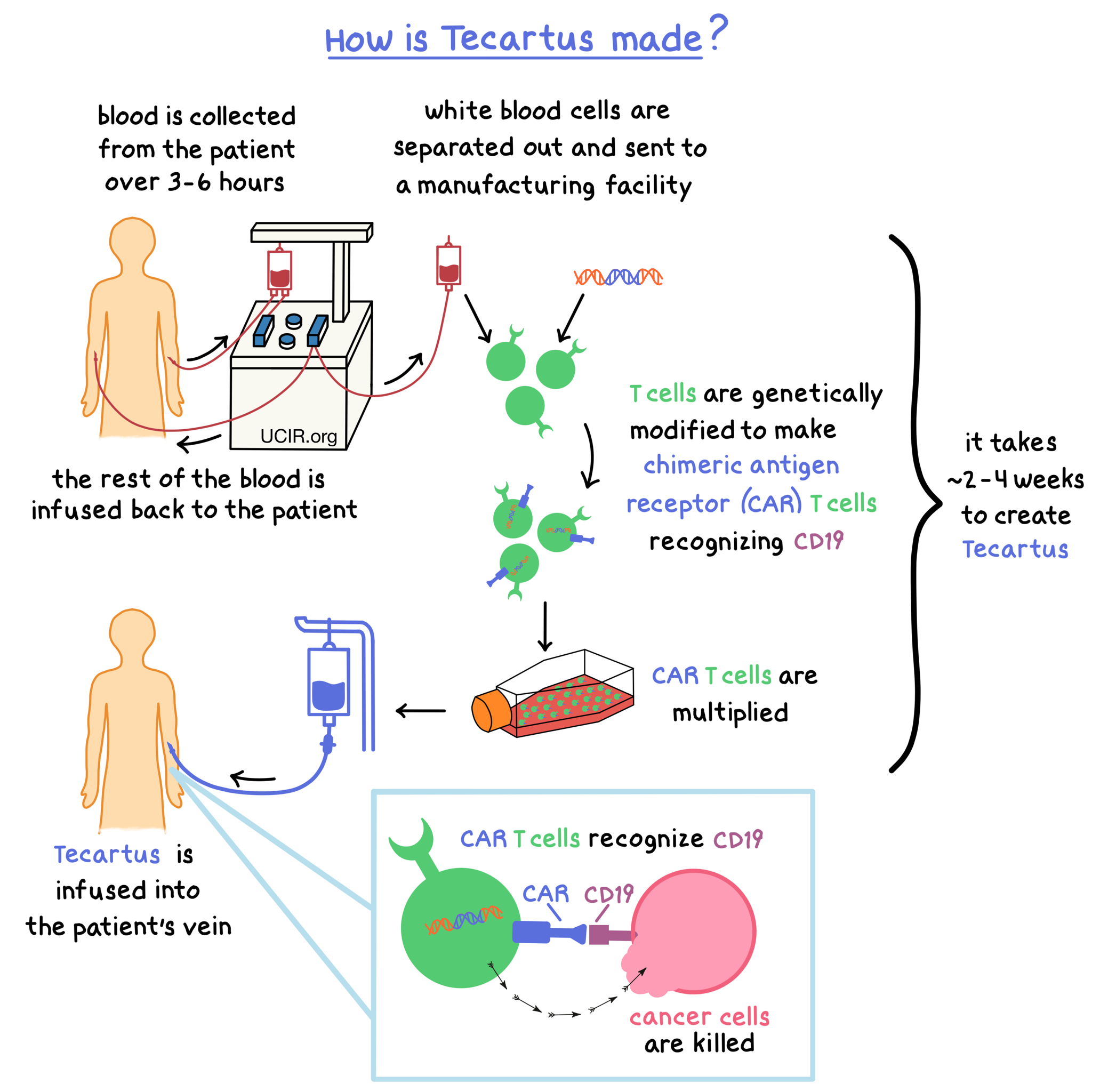 Before receiving Tecartus, patients are treated with a short course of chemotherapy to reduce the number of white blood cells. The chemotherapies cyclophosphamide and fludarabine are administered 5, 4 and 3 days before treatment with Tecartus through a tube in the vein (intravenous, i.v.). The reduction in the patient’s white blood cell count gives the CAR T cells in Tecartus enough space to multiply, and provides them with the resources needed to survive longer in the patient. About 30 to 60 minutes before receiving Tecartus, patients receive acetaminophen and an antihistamine to reduce the chance of reactions to the infusion.

Patients receive Tecartus through an intravenous (IV) infusion (through a tube in the vein). The administration of Tecartus usually takes about 30 minutes.

Patients should plan to stay close to the treatment location for at least 4 weeks after receiving Tecartus and will be monitored daily for at least 7 days following administration of Tecartus.

It is important to keep in mind that each patient’s actual outcome is individual and may be different from the results found in the clinical studies. In addition, with immunotherapy, sometimes it takes several months for responses to be observed. The long-term clinical trial data currently available is limited, and more clinical trials are ongoing.

In a clinical trial, 60 patients with mantle cell lymphoma who had been previously treated, but whose cancer either did not respond (refractory) or had since returned (relapsed), patients were treated with a single infusion of Tecartus.

Most patients receiving Tecartus experience side effects. Some side effects, such as cytokine release syndrome (CRS) and neurological toxicities, may be severe or life-threatening. Patients will be monitored daily by their health care provider for at least 7 days after the infusion of Tecartus, and should remain within a reachable distance of the healthcare facility for at least four weeks. Patients and caregivers receive careful instructions to monitor for signs and symptoms related to CRS and neurological toxicities. Both conditions are managed by the health care provider.

CRS is caused by a widespread release of molecules called cytokines, which are involved in inflammation and can affect the function of various organs. Cytokines may be released by the CAR T cells in Tecartus or by other immune cells in the patient’s body. Symptoms of CRS include high fever, chills, difficulty breathing, severe muscle or joint pain, severe nausea, vomiting, diarrhea, very low blood pressure, and dizziness or lightheadedness. CRS typically occurs between 1 and 10 days after a Tecartus infusion, and the health care provider should be immediately notified if symptoms occur.

Tecartus can lead to other side effects, some of which could be long lasting. The CAR T cells in Tecartus kill cancer cells that have the molecule CD19 on their surface; however, CD19 is also found on the surface of healthy B cells, which can also be killed by Tecartus. The decrease in healthy B cells leads to low levels of antibodies (immunoglobulins) and an increased risk of serious, potentially life-threatening, infections. If a patient is a carrier of the hepatitis B virus, Tecartus can cause serious liver problems, including liver failure and death. Other possible side effects include nausea, diarrhea, fever, low blood pressure, fast heartbeat, headache, muscle pain, lower back pain, sleepiness, confusion, temporary memory and coordination problems, low blood cell counts, serious allergic reactions, and development of other cancers.