Darzalex Faspro is approved for:

Darzalex Faspro is approved for:

In some cases, Darzalex Faspro is used in combination with lenalidomide or thalidomide. This treatment can cause harm to a fetus, including severe, life-threatening birth defects, and is not recommended for use during pregnancy. Patients are advised to also refer to the lenalidomide and thalidomide prescribing information for contraception requirements.

Darzalex Faspro is a combination treatment of daratumumab (Darzalex) and hyaluronidase. Darzalex is the therapeutic component of the treatment, while hyaluronidase is added to increase the ability for Darzalex to infiltrate into tissue under the skin and enter the bloodstream.

Darzalex is an antibody that was made in the laboratory. Darzalex and other antibody molecules have an overall “Y” shape. The two tips of the upper arms of the “Y” shape are the parts of the antibody that can very precisely bind to their targets. Darzalex attaches to a molecule called CD38. CD38 plays a role in the attachment of neighboring cells to each other, and in transmitting messages from the outside of the cell to the inside of the cell. CD38 is present on the surface of many types of immune cells (white blood cells) and red blood cells, but is found in higher amounts on the surface of myeloma cells. The stem of Darzalex’s “Y” shape has binding sites that attract immune cells or other parts of the immune system.

At least five different mechanisms are thought to be responsible for the elimination of myeloma cells by Darzalex. Darzalex works alone and/or is helped by the immune system to kill myeloma cells

Direct cell killing
By binding to CD38 molecules on the surface of myeloma cells and bringing the CD38 molecules close together in “clusters”, Darzalex can directly cause the cells to die.

Complement-dependent cytotoxicity (CDC)
When bound to CD38 on the surface of myeloma cells, the “stem” of Darzalex can attract and bind molecules of the immune system called “complement” that freely flow in the blood or tissues. Activation of the complement system causes the formation of the “membrane attack complex”, which can puncture and destroy the cell that Darzalex is bound to.

Antibody-dependent cell-mediated cytotoxicity (ADCC)
When bound to CD38 on the surface of myeloma cells, the “stem” of Darzalex can also attract and bind immune cells. This allows Darzalex to act as a bridge between the target cells and the immune cells (such as the natural killer (NK) cells). The immune cells then release molecules that can kill the cells that Darzalex is bound to.

Phagocytosis
When Darzalex is bound to myeloma cells, it can also attract immune cells called phagocytes, which have the ability to ingest (“eat”) cells that have been coated with Darzalex.

Strengthening the immune response
Darzalex can bind to CD38 on the surfaces of certain types of immunosuppressive immune cells that reduce the strength of an immune response, causing such cells to die. At the same time, Darzalex can activate immune cells that are required for the elimination of cancer cells, thus allowing for a stronger immune attack on myeloma cells.

The combined effect of these mechanisms results in the elimination of melanoma from the body. Because CD38 is also found on certain normal cells, Darzalex can attack and reduce the numbers of some types of immune cells, including healthy B cells and natural killer (NK) cells. 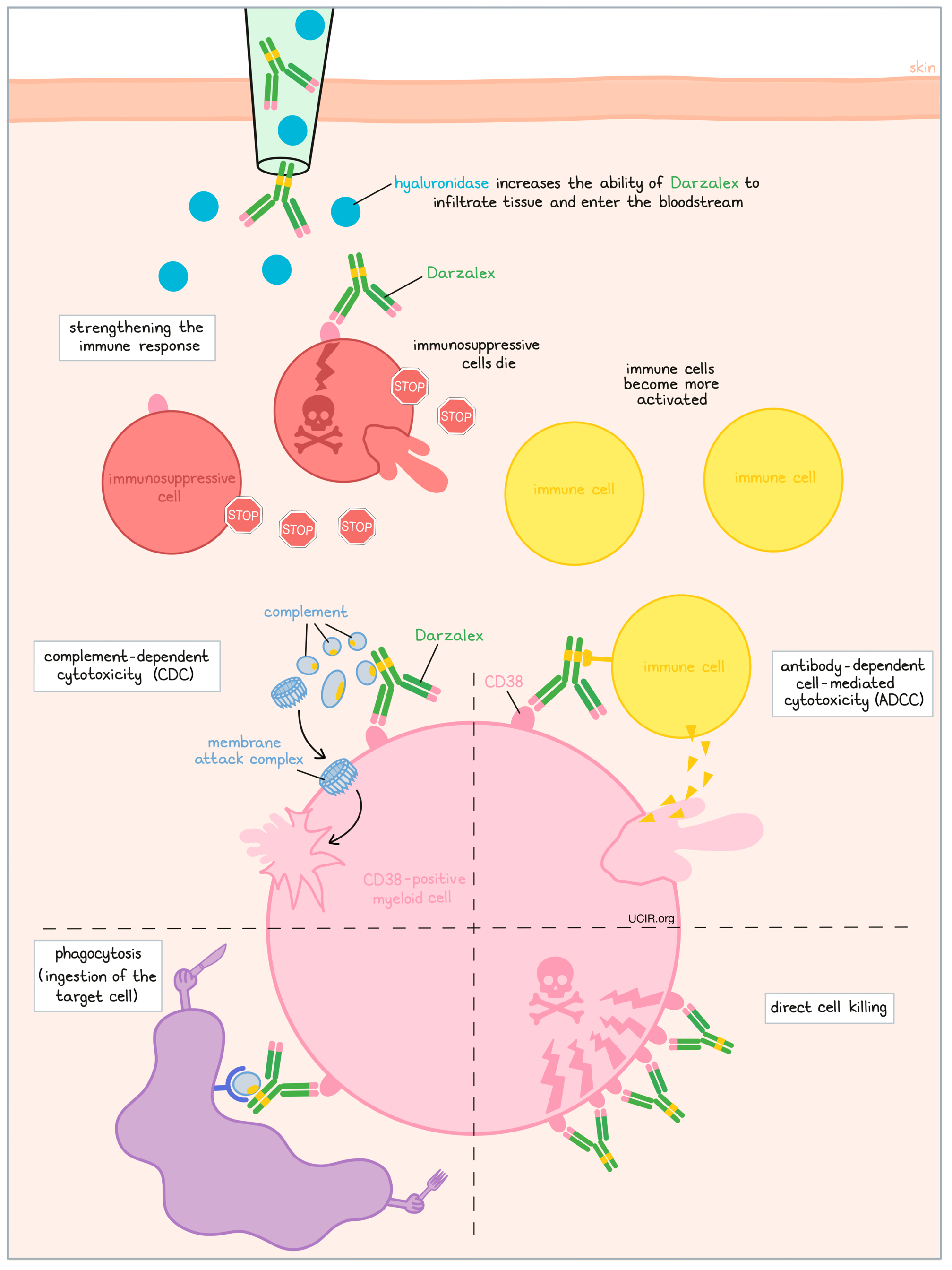 About 1 to 3 hours prior to receiving each dose of Darzalex Faspro, patients receive several medications to help reduce the chance of a reaction to the infusion:

Patients may receive corticosteroids after each infusion of Darzalex to reduce the risk of a delayed reaction to the infusion.

In a clinical trial, 67 patients with newly diagnosed multiple myeloma who could not receive an autologous stem cell transplant, were treated with Darzalex Faspro plus bortezomib, melphalan, and prednisone (D-VMP). At a minimum follow-up of 10 months, 88% of patients saw their cancer shrink in response to the treatment, with 18% seeing their cancer disappear entirely.

In a clinical trial, 65 patients with multiple myeloma whose cancer had been previously treated, but it either did not respond to treatment (refractory) or had since returned (relapsed), were treated with Darzalex Faspro plus lenalidomide and dexamethasone (D-Rd). At a minimum follow-up of 10 months, 91% of patients saw their cancer shrink in response to the treatment, with 18% seeing their cancer disappear entirely.

In another clinical trial, 522 patients with multiple myeloma who had received at least 3 prior treatments, including a proteasome inhibitor and an immunomodulatory agent, but whose cancer either did not respond to treatment (refractory) or had returned since treatment (relapsed), were randomized to receive either Darzalex Faspro or intravenous daratumumab (Darzalex). This trial was set out to study whether Darzalex Faspro and Darzalex would deliver a similar benefit to patients. At a median follow-up of 8 months:

Darzalex Faspro may interfere with the results of blood tests that are needed before a patient can receive a blood transfusion. Tests to match a patient’s blood type should be done before the first dose of Darzalex.