REMS Program: Due to the potential for serious side effects, Abecma is currently only available through a Risk Evaluation and Mitigation Strategy (REMS) program. Patients must first qualify for the program before receiving treatment with Abecma.
Age: The safety and efficacy of Abecma in patients under 18 years of age has not been established.
Pregnancy/Breastfeeding: The risks associated with Abecma during pregnancy are not known and cannot be ruled out. Due to the potential for harm to the fetus, Abecma is not recommended for use during pregnancy. The risks associated with Abecma during breastfeeding are not known and cannot be ruled out. Due to the potential for adverse reactions in the breastfed child, the treatment needs of the mother must be carefully weighed against the potential health consequences for the child.
Effects on the ability to drive and use machines: Patients are advised to refrain from driving, engaging in potentially dangerous activities, and operating heavy machinery for at least 8 weeks after receiving Abecma.
Interaction with other drugs: Corticosteroids should not be administered shortly before Abecma treatment, as they may limit the activity of Abecma.
Vaccinations: Live virus vaccinations (e.g., chickenpox or measles, mumps, and rubella (MMR)) are not recommended for at least 6 weeks prior to or during Abecma treatment, and until the patient's white blood cell count has recovered following treatment.
Infections and inflammatory disorders: Abecma can weaken the immune system and is not recommended for use in patients who currently have an infection or inflammatory disease. Patients are screened for the hepatitis B virus, hepatitis C virus, cytomegalovirus (CMV), and human immunodeficiency virus (HIV) prior to Abecma treatment. In patients who had hepatitis B or a CMV infection in the past, or who are carriers of the hepatitis B virus or CMV, Abecma can cause the virus to become active again. These patients need to be monitored closely during treatment and for several months after Abecma treatment. Patients may receive antiviral therapy to prevent the viruses from becoming active again.

Abecma is made from the patient’s own T cells (a type of white blood cell). In order to make Abecma, blood is collected from the patient’s vein. In a process called leukapheresis, the white blood cells (including T cells) are separated from the collected blood, and the rest of the blood is returned to the patient; this process usually takes 3 to 4 hours and may need to be repeated. The collected white blood cells are sent to a specialized manufacturing facility where the patient’s T cells are genetically modified in such a way that they make a protein on their surface called chimeric antigen receptor (CAR). The modified T cells (“CAR T cells”) are multiplied to create millions of CAR T cells. The multiplied CAR T cells are then delivered back to the patient through a tube in the vein. The entire process, from leukapheresis to treatment administration, takes about a month.

Once inside the body, the CARs on the surfaces of the modified CAR T cells can attach to a protein called BCMA on the surface of multiple myeloma cells. When a CAR attaches to BCMA, the T cells recognize the cancer cells and kill them. 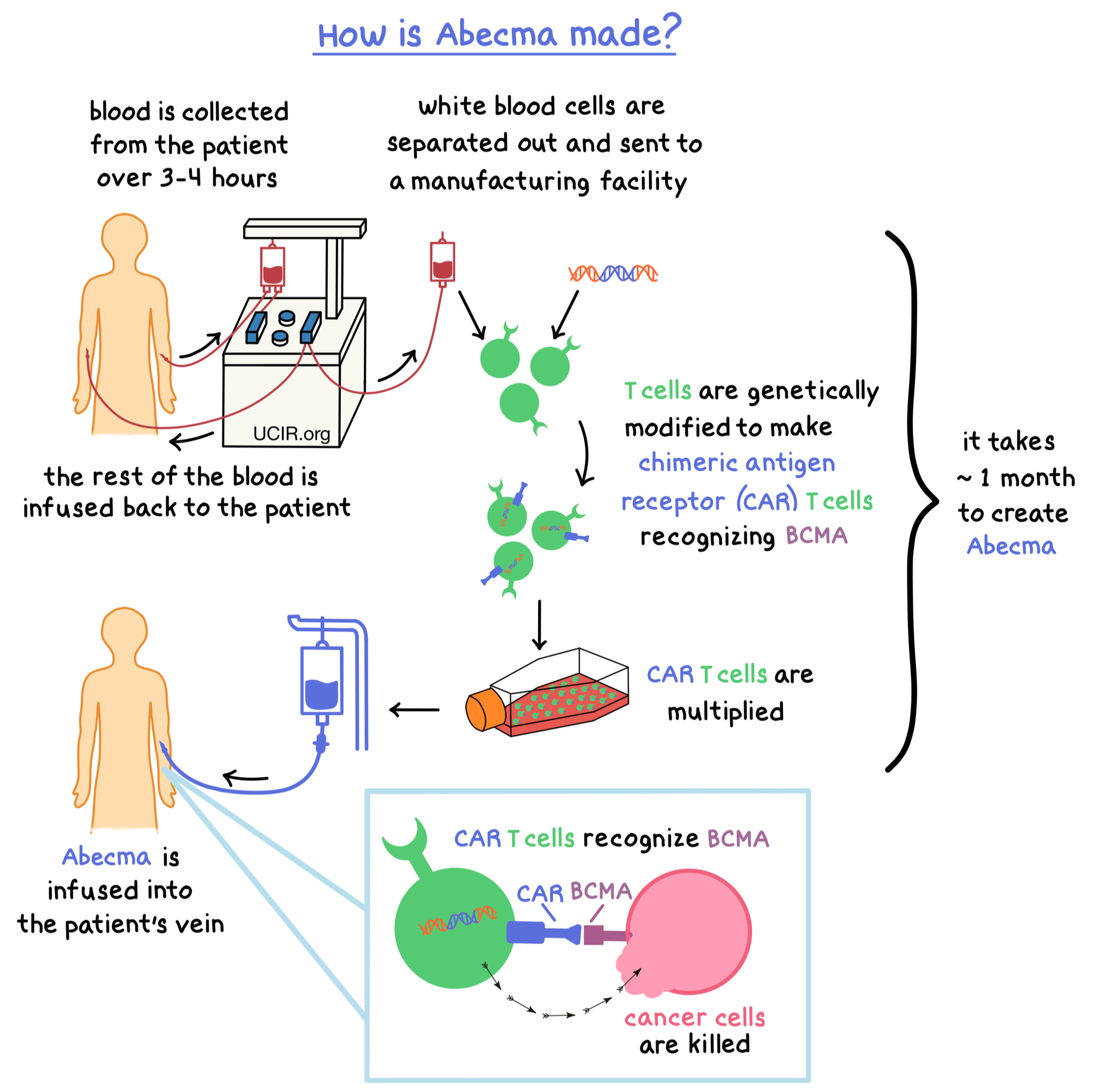 Before receiving Abecma, patients are treated with a short, 3-day course of chemotherapy to reduce the number of white blood cells. The chemotherapies cyclophosphamide and fludarabine are administered on day 5, 4 and 3 before treatment with Abecma through a tube in the vein (intravenous, i.v.). The reduction in the patient’s white blood cell count gives the CAR T cells in Abecma enough space to multiply, and provides them with the resources needed to survive longer in the patient. About 30 to 60 minutes before receiving Abecma, patients receive acetaminophen and an antihistamine (e.g., diphenhydramine) to reduce the chance of reactions to the infusion. Patients receive Abecma through a tube in the vein. The administration of Abecma may take up to an hour.

Patients are monitored daily for at least 7 days following administration of Abecma, and should plan to stay close to the treatment location for at least 4 weeks after receiving Abecma.

Multiple myeloma In a clinical trial, 100 patients with multiple myeloma who had been previously treated with a median of 6 prior therapies (including an immunomodulatory agent, a proteasome inhibitor, and an anti-CD38 antibody), but whose cancer either did not respond to treatment or had since returned, were treated with Abecma. At a median follow-up of 11 months:

For 1.5% of the patients (2 of 135 patients) who underwent leukapheresis, Abecma could not be manufactured.

The most common side effects of Abecma include cytokine release syndrome (CRS), infections, fatigue, diarrhea, nausea, fever, cough, headache, decreased appetite, muscle, bone or joint pain, swelling of and feets, low blood cell counts, and low antibody counts. Some side effects, such as cytokine release syndrome (CRS), neurological toxicities, hemophagocytic lymphohistiocytosis (HLH)/macrophage activation syndrome (MAS), prolonged low blood cell counts, and reactions to the infusion may be severe or life-threatening. Patients are monitored daily by their healthcare provider for at least 7 days after the infusion of Abecma, and should remain within a reachable distance of the healthcare facility for at least four weeks. Patients and caregivers receive careful instructions to monitor for signs and symptoms related to the aforementioned conditions. These conditions are managed by the healthcare provider.

Cytokine Release Syndrome (CRS)
CRS is caused by a widespread release of molecules called cytokines, which are involved in inflammation and can affect the function of various organs. Cytokines may be released by the CAR T cells in Abecma or by other immune cells in the patient’s body. Symptoms of CRS include high fever, chills, difficulty breathing, severe muscle or joint pain, severe nausea, vomiting, diarrhea, very low blood pressure, and dizziness or lightheadedness. CRS typically occurs between 1 and 10 days after an Abecma infusion, and the healthcare provider should be immediately notified if symptoms occur.

Hemophagocytic Lymphohistiocytosis/Macrophage Activation Syndrome (HLH/MAS)
Some of the cytokines released during cytokine release syndrome can result in an excessive activation of the immune system, causing HLH/MAS. In HLH/MAS, immune cells such as lymphocytes (in HLH) and macrophages (in MAS) begin attacking and destroying healthy tissues, causing widespread tissue damage and inflammation. HLH/MAS can be very severe and if left untreated, are often life-threatening or fatal. Symptoms of HLH/MAS typically occur within 10 days of receiving Abecma and include low blood pressure, low oxygen levels in the blood, altered organ function, and multiple organ failure.