Age: The safety and efficacy of Margenza in patients under 18 years of age have not been established.
Pregnancy/Breastfeeding: Margenza can cause harm to a fetus, and is not recommended for use during pregnancy. Women are advised to use contraception during treatment with Margenza and for at least 4 months after the last dose of Margenza. Women who receive Margenza while pregnant or within 4 months before conception should be monitored for any signs of an insufficient volume of the amniotic fluid. The risks associated with Margenza treatment during breastfeeding are not known and cannot be ruled out. Due to the potential for adverse reactions in the breastfed child, the treatment needs of the mother must be carefully weighed against the benefits of breastfeeding during treatment with Margenza and within 4 months after the last dose of Margenza.
Drug interactions: Treatment with anthracycline-based chemotherapy (e.g., doxorubicin) should be avoided for up to 4 months after stopping Margenza. Patients who receive anthracycline-based chemotherapy less than 4 months after stopping Margenza may be at increased risk to develop heart problems.

Margenza is an antibody that was made in the laboratory and designed to attach to a protein molecule called HER2. HER2 is present on the surface of some normal cells in the body, and it is also present in much higher quantities on the surface of breast cancer cells. Higher-than-normal amounts of HER2 on cancer cells make these cells the main target of Margenza.

Cancer cell growth inhibition
When HER2 on the surface of cells binds to itself or to other HER2-related proteins, it sends signals into the cell. These signals cause the cell to multiply, or in other ways promote the cell’s survival (such as by causing cancer cells to produce molecules that enhance the growth of blood vessels, which help feed the tumor and support its growth). Higher-than-normal amounts of HER2 allow cancer cells to grow and multiply out of control. Binding of Margenza to HER2 blocks HER2 from pairing up and sending these signals into the cancer cells, preventing the cells from persisting and multiplying. In addition, Margenza prevents cancer cells from “shedding” the HER2 molecules on their cell membranes. This may increase the action of Margenza on HER2-positive breast cancer cells.

Antibody-dependent cell-mediated cytotoxicity (ADCC)
When bound to HER2 on the surface of cancer cells, the stem of Margenza can also attract and bind immune cells (like NK cells). This allows Margenza to act as a bridge between the target cell and the immune cell. The immune cell then releases molecules that can kill the cell that Margenza is bound to. Margenza is very similar to trastuzumab (Herceptin), but Margenza’s stem has been modified in the laboratory to increase the ADCC activity of Margenza compared to trastuzumab. 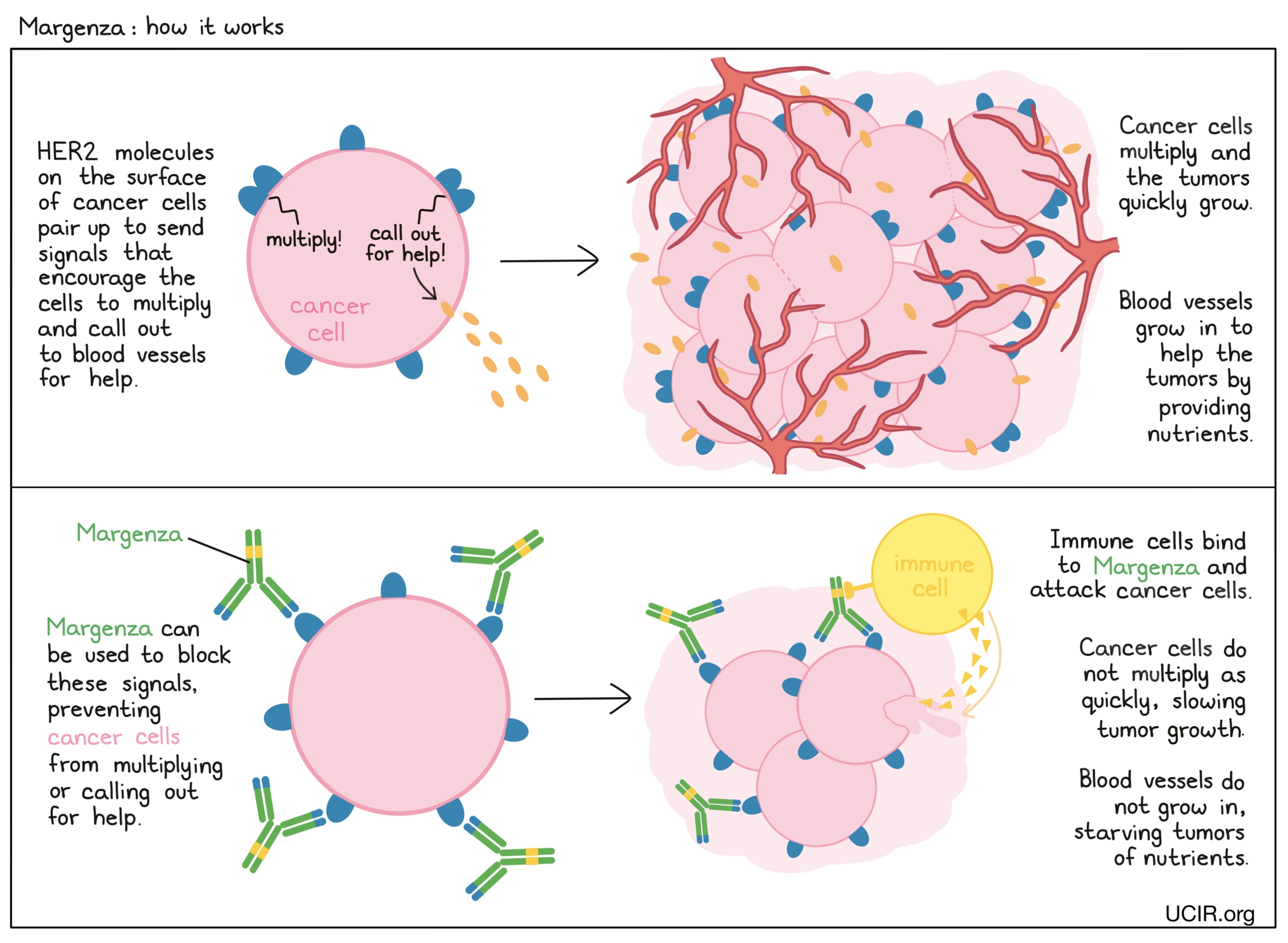 In a clinical trial, 536 patients with with breast cancer that had spread to other parts of the body and tested positive for the HER2 molecule, and who had received prior treatment that targeted the HER2 molecule, were either treated with Margenza or trastuzumab (Herceptin), alongside chemotherapy (investigator’s choice of capecitabine, eribulin, gemcitabine, or vinorelbine).

The most common side effects of Margenza in combination with chemotherapy include weakness, fatigue, nausea, vomiting, constipation, diarrhea, headache, fever, hair loss, abdominal pain, muscle and joint pain, pain in the extremities, nerve damage (numbness, weakness, and pain in the hands and feet), hand-foot syndrome (tingling, tenderness, redness, swelling and pain primarily on the palm of the hand and sole of the foot), rash, coughing, difficulty breathing, and infusion-related reactions.