Monjuvi is approved for:

Monjuvi is an antibody that was made in a laboratory and designed to attach to a protein molecule called CD19. CD19 is present on the surface of diffuse large B-cell lymphoma (DLBCL) cells. It is also found on the surface of normal human B cells, which means that in addition to attacking cancer cells, Monjuvi can also attack healthy B cells. 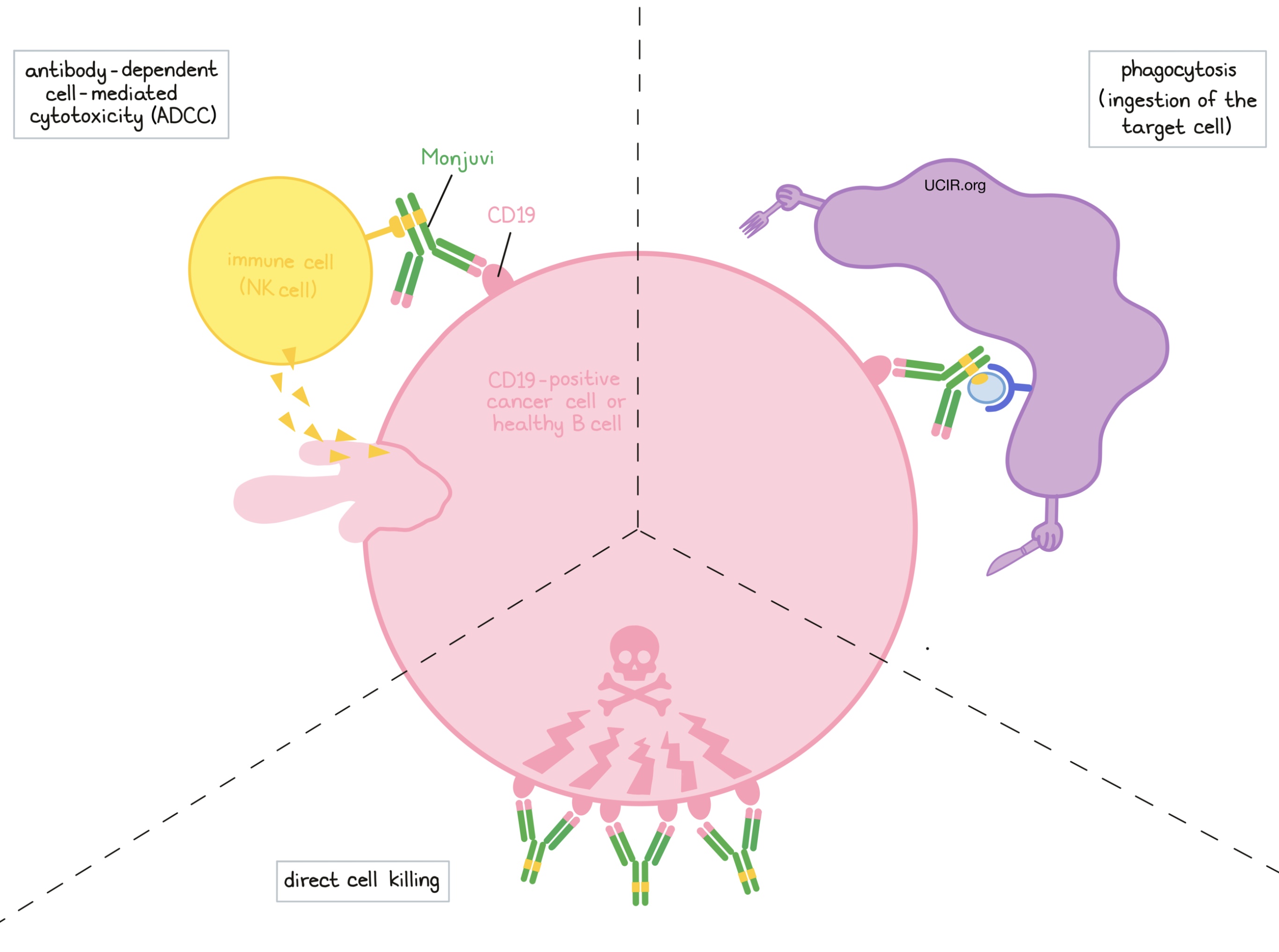 Direct cell killing
By binding to CD19 molecules on the surface of diffuse large B-cell lymphoma (DLBCL) cells or normal B cells, Monjuvi can directly cause the cells to die.

Antibody-dependent cell-mediated cytotoxicity (ADCC)
When bound to CD19 on the surface of diffuse large B-cell lymphoma cells or normal B cells, the stem of Monjuvi can also attract and bind immune cells (like NK cells). This allows Monjuvi to act as a bridge between the target cell and the immune cell. The immune cell then releases molecules that can kill the cell Monjuvi is bound to.

Antibody-dependent cell-mediated phagocytosis (ADCP)
When Monjuvi is bound to diffuse large B-cell lymphoma (DLBCL) cells or normal B cells, it can also attract immune cells called phagocytes, which have the ability to ingest (“eat”) cells that have been coated with Monjuvi.

The combined effect of these mechanisms results in the elimination of cancerous and normal B cells from the body. A new population of healthy B cells can then develop from blood-forming stem cells that reside in the bone marrow.

Lenalidomide has been shown to increase the activity of Monjuvi.

Monjuvi is administered through a tube in the vein (intravenous infusion, or i.v.). Treatment with Monjuvi is divided into 28-day treatment cycles.

Monjuvi is given in combination with lenalidomide (Revlimid) for a maximum of 12 treatment cycles, followed by Monjuvi alone until the patient’s disease begins progressing or until the patient can no longer tolerate treatment. The first infusion of Monjuvi may take up to 2.5 hours to administer, but subsequent infusions typically last 1.5 to 2 hours.

Two hours to 30 minutes before the administration of Monjuvi patients may receive several medications to to help reduce the chance of and the severity of an reaction to the infusion: 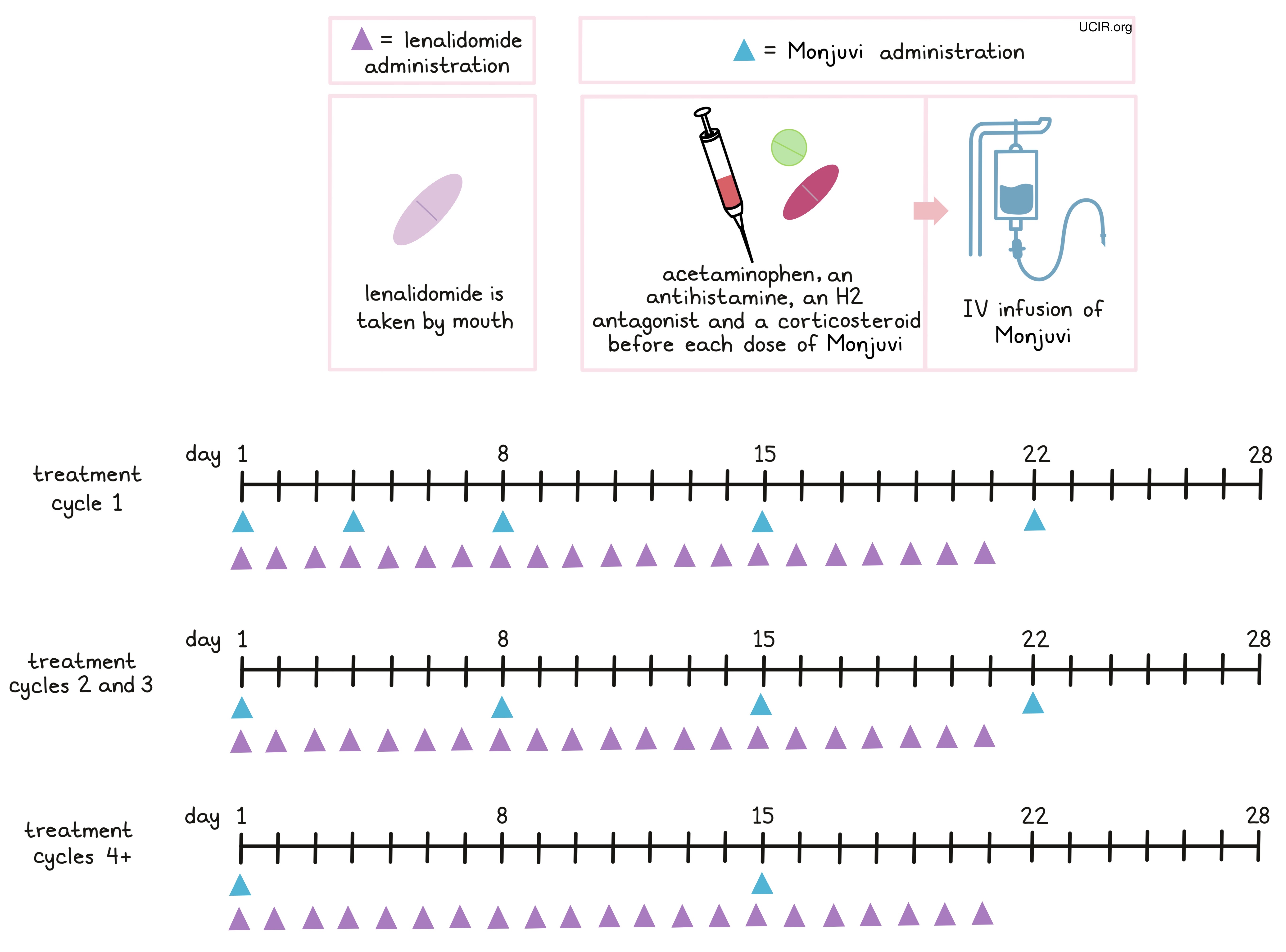 In a clinical trial, 71 patients with diffuse large B-cell lymphoma who had previously received treatment, but the cancer either did not respond (refractory), or had since returned (relapsed), and for whom stem cell transplant was not an option, were treated with Monjuvi in combination with lenalidomide.

Some side effects, such as reactions related to the infusion, decreased bone marrow activity, and infections can become serious or life-threatening. Patients and caregivers receive careful instructions to monitor for signs and symptoms related to these conditions. These conditions are managed by the health care provider.

Infusion-Related Reactions
Infusion-related reactions are negative responses to receiving an infusion. Most infusion-related reactions typically occur within 24 hours of the first or second infusion. Symptoms include chills, flushing, high blood pressure, and shortness of breath. Palpitations (feeling as if your heart is fluttering or racing) and chest pain can also be symptoms of a reaction. A healthcare provider should be immediately notified if symptoms occur.

Patients should report any symptoms to their healthcare provider, who can then initiate actions to limit or reverse the side effects. Treatment with Monjuvi may be interrupted and later resumed, or permanently stopped depending on the severity of the reaction. For a more complete list of possible side effects, see the full prescribing information.