Elzonris is a medicine that was made in the laboratory and consists of two parts that are connected: a small molecule, called interleukin-3, and a cell poison, called diphtheria toxin, that was obtained from a bacterium. The Interleukin-3 portion of the Elzonris attaches to another molecule, known as interleukin-3 receptor (CD123), on the surface of BPDCN cells. When Elzonris attaches to the interleukin-3 receptor, it can enter BPDCN cells. Inside the cell, the diphtheria toxin part of Elzonris is released, preventing the cell from making essential proteins and leading to cell death.

Before starting Elzonris therapy, patients will have their vital signs checked and will need to get blood tests done to monitor liver function.

One hour before to each administration of Elzonris, patients receive several medications to help reduce the chance of a reaction to the infusion:

Elzonris is administered via a tube in the vein (intravenous infusion, or I.V.) over 15 minutes once daily on days 1 through 5 of a 21 day treatment period. Each 21 day treatment period is one treatment “cycle”. If a patient shows symptoms of any serious side effects, treatment may be interrupted or temporarily withheld until the side effects subside. In the event of such a dose delay, the dose period may be extended up to day 10 of a treatment cycle. During the first treatment cycle, patients are required to stay in a hospital. Subsequent treatment cycles will be monitored by a healthcare professional during and for at least four hours after each dose, and may not require a hospital stay. 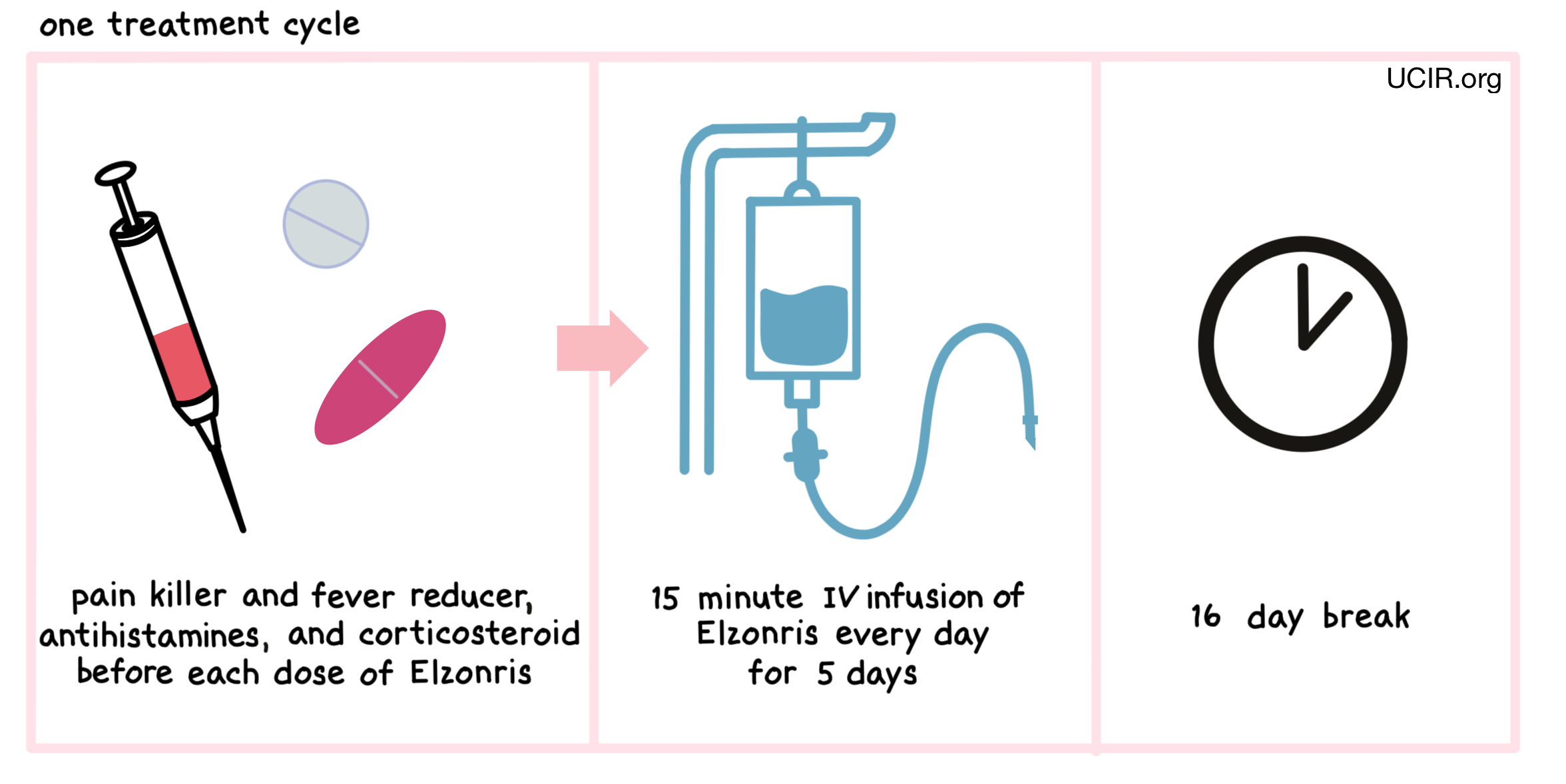 It is important to keep in mind that each patient’s actual outcome is individual and may be different from the results found in the clinical studies.

In a clinical trial, 13 patients with previously untreated blastic plasmacytoid dendritic cell neoplasm were treated with Elzonris. At a median follow-up of 12 months, 7 patients (54%) had their cancer completely disappear within 14 to 107 days. Some of these 7 patients were cancer-free, but still had abnormal parts of their skin. Some patients went on to receive a stem cell transplant.

In a clinical trial, 15 patients with blastic plasmacytoid dendritic cell neoplasm who had previously received treatment for their disease, but whose cancer either did not respond to the treatment (refractory) or had since returned (relapsed), were treated with Elzonris. Of the 15 patients, 10 (67%) patients responded to Eronris treatment within 17 to 48 days, and responses lasted for a median of 3 months. More than half of the 15 patients were alive after 9 months. One patient went on to receive a stem cell transplant.

Elzonris can cause side effects that can become serious or life-threatening. Some of the serious side effects related to Elzonris include Capillary Leak Syndrome, hypersensitivity reactions, and liver damage. Patients should immediately report any symptoms to their healthcare provider, who can then initiate actions to limit or reverse the side effects.

Elzonris may cause fluid to leak from small blood vessels into surrounding tissues, which is a serious, potentially life-threatening condition that can result in low blood pressure and fast weight gain. Other symptoms of Capillary Leak Syndrome include weakness or dizziness, tiredness, swelling of the face, arms, or legs, and shortness of breath or trouble breathing.

Elzonris is known to have the potential to cause damage to the liver. Symptoms of liver damage may include abnormal measures of liver function in the blood, fatigue, loss of appetite, yellowing of the skin or the whites of the eyes, and upper right abdominal pain.

Patients should report any symptoms to their healthcare provider, who can then initiate actions to limit or reverse the side effects.