Kimmtrak can only be used to treat patients who test positive for HLA-A*02:01.

Age: The safety and efficacy of Opdivo in patients under 18 years of age have not been established.
Pregnancy/Breastfeeding: Kimmtrak may cause harm to a fetus, and is not recommended for use during pregnancy. Women should not start Kimmtrak treatment when pregnant and are advised to use contraception during treatment and for at least 1 week after the last dose of Kimmtrak. The risks associated with Kimmtrak during breastfeeding are not known and cannot be ruled out. Due to the potential for serious adverse reactions in the breastfed child, women are advised not to breastfeed during treatment and for 1 week after the last dose of Kimmtrak.

Kimmtrak is a “bispecific protein” that was artificially made in the laboratory and can very precisely bind two different target molecules at the same time. Kimmtrak binds to: 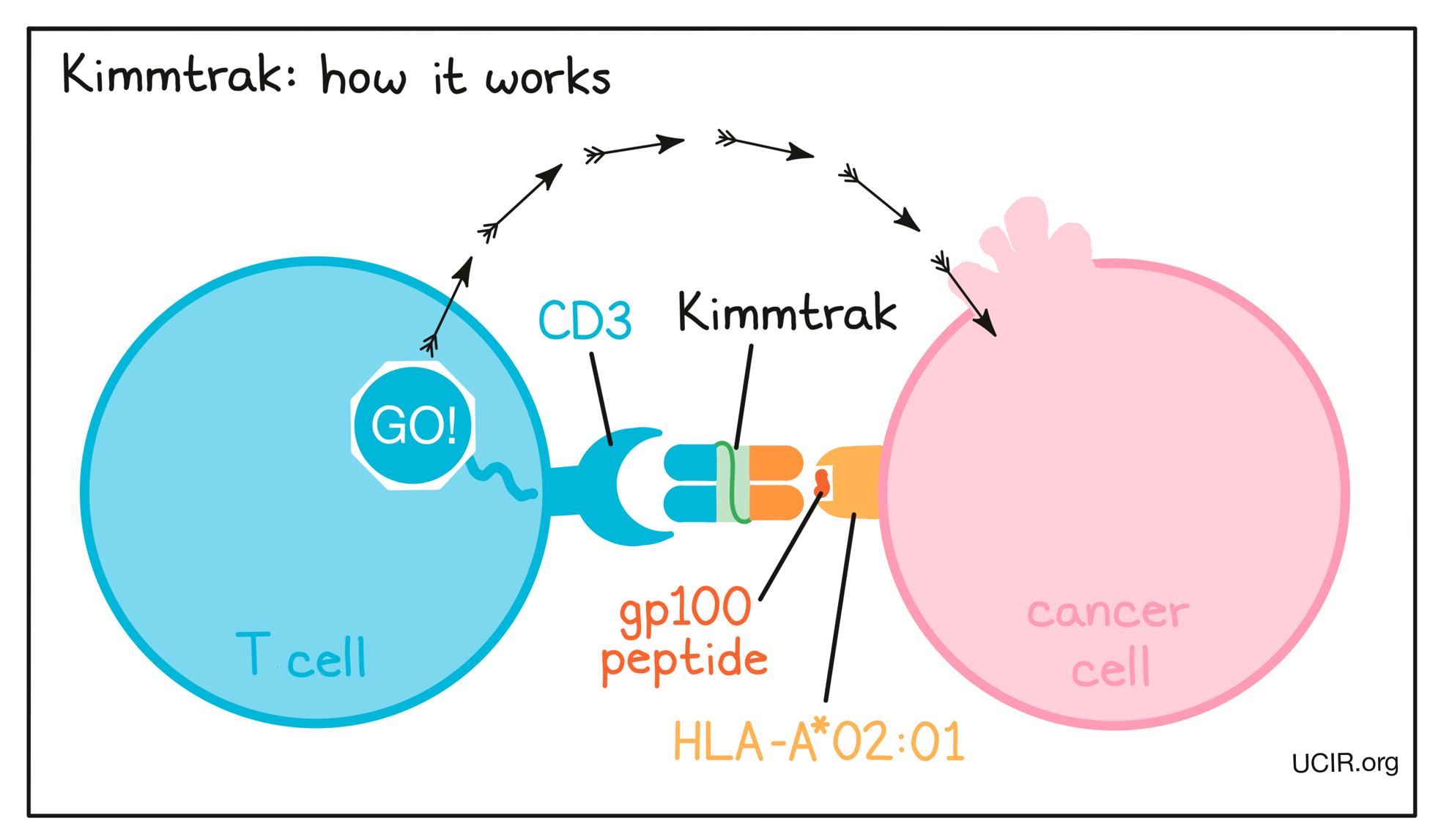 How is the drug given to the patient?

Kimmtrak is administered weekly via a tube into a vein (intravenous infusion, or i.v.). During the first three infusions, the dose is slowly increased to the recommended dose. The first three infusions are administered over the course of 15-20 minutes in a hospital setting, and patients are observed for at least 16 hours after the administration of Kimmtrak for any symptoms related to the infusion. Subsequent infusions do not require a hospital stay, and patients are monitored for at least 30 min after the administration of Kimmtrak.

It is important to keep in mind that each patient’s outcome is individual and may be different from the results found in the clinical studies. In addition, immunotherapy can sometimes take several months to yield an observable treatment response.

In a clinical trial, 378 patients with uveal melanoma (a type of eye cancer) that had spread to other parts of the body from the original cancer site, or could not be removed by surgery, and who had not received prior treatment for their advanced disease, were either treated with Kimmtrak or the investigator’s choice of pembrolizumab (Keytruda), ipilimumab (Yervoy), or dacarbazine.

At a median follow-up of 14 months:

The most common side effects of Kimmtrak include skin reactions (dry skin, rash, itching, swelling), fever, tiredness, nausea, vomiting, chills, stomach pain, headache, low blood pressure, and abnormal liver blood tests. Some side effects, such as cytokine release syndrome, may be severe and life-threatening. Patients should report any symptoms to their healthcare provider, who can then initiate actions to limit or reverse the side effects.

CRS is caused by a widespread release of molecules called cytokines, which can cause inflammation and can affect the function of various organs. Cytokines may be released by the T cells to which Kimmtrak binds, or by other immune cells in the patient’s body. Signs and symptoms of CRS include fever, headache, nausea, low blood pressure, and weakness. A healthcare provider should be immediately notified if symptoms occur. CRS usually occurs at the beginning of the treatment, during the first three infusions.