Age: The safety and efficacy of Tivdak in patients under 18 years of age have not been established.
Exclusions: Tivdak should not be administered to patients with moderate or severe liver disease.
Fertility/Pregnancy/Breastfeeding: Tivdak may impair fertility in men. Tivdak can cause harm to a fetus, and is not recommended for use during pregnancy. Women should not start Tivdak treatment when pregnant. Women and men are advised to use effective contraception to prevent pregnancy for two months or 4 months after the last dose of Tivdak, respectively. The risks associated with Tivdak during breastfeeding are not known and cannot be ruled out. Due to the potential for serious adverse reactions in the breastfed child, women are advised not to breastfeed during treatment with Tivdak and for 3 weeks after the last dose.
Interactions with other drugs: Concurrent use of Tivdak and strong CYP3A4 inhibitors (e.g., clarithromycin, nefazodone, itraconazole, ketoconazole, atazanavir, darunavir, and lopinavir) may increase the risk of side effects.

Tivdak is a medicine that consists of two parts that are connected:

Tivdak and other antibody molecules have an overall “Y” shape. The two tips of the upper arms of the “Y” shape are the parts of the antibody that can very precisely bind to their targets – in this case, tissue factor. The stem of Tivdak’s “Y” shape has the chemotherapy drug MMAF connected to it, and also has binding sites for immune cells or other parts of the immune system.

Different mechanisms are thought to be responsible for the elimination of cancer cells by Tivdak. Tivdak may work alone or may be helped by the immune system to kill cancer cells.

When Tivdak binds to tissue factor, it can enter the cell it is bound to. Inside the cell, the chemotherapy part of Tivdak is released and becomes activated. MMAE prevents the cells from multiplying and leads to their death. By attaching to tissue factor, which is present in high amounts on cervical cancer cells, Tivdak is designed to minimize harm to normal, healthy cells, and to bring the chemotherapy directly to the cancer cells. After the death of the cancer cells, released free MMAE can go on and kill neighboring cancer cells.

When bound to tissue factor on the surface of cervical cancer cells, the “stem” of Tivdak can also attract and bind immune cells (like NK cells). This allows Tivdak to act as a bridge between the target cell and the immune cell. The immune cell then releases molecules that can kill the cell Tivdak is bound to.

When Tivdak is bound to tissue factor on the surface of cancer cells, it can attract immune cells called phagocytes, which have the ability to ingest (“eat”) cells that have been coated with Tivdak or with parts of the complement system.

Promotion of a long-lasting immune response 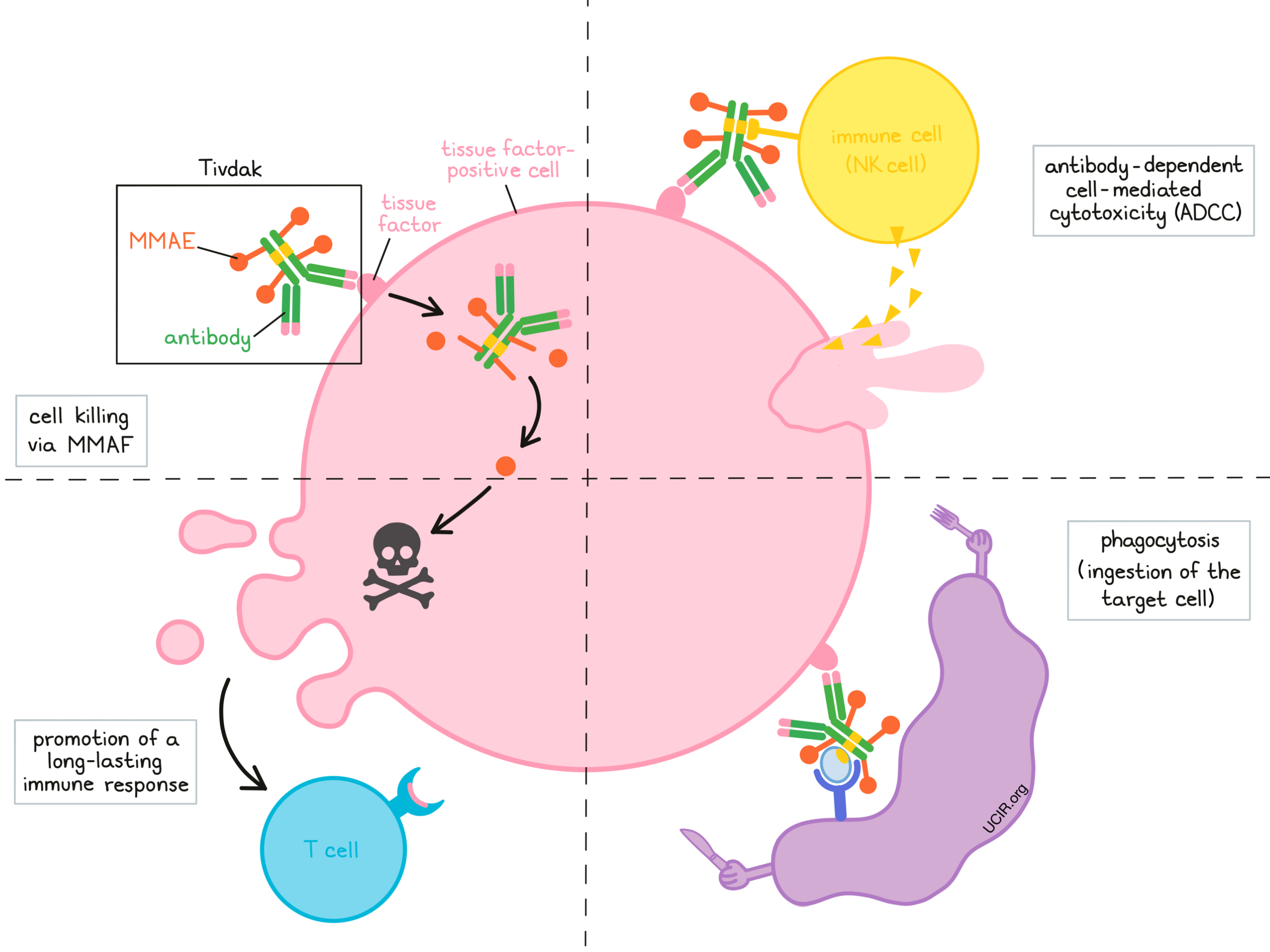 Tivdak is administered via a tube into a vein (intravenous infusion, or i.v.) over 30 minutes every three weeks, and does not require a hospital stay.

Immediately prior to each infusion of Tivdak, patients receive eye drops that temporarily reduce the size of blood vessels in the eye, and cooling eye pads that should stay on during the infusion. In addition, patients receive corticosteroid eye drops just before each infusion and for 2 days after the infusion. Patients are advised to use lubricant eye drops every day throughout treatment as needed, and for 30 days after the last dose of Tivdak. Patients should avoid the use of contact lenses during the entire treatment with Tivdak.

In a clinical trial, 101 patients with cervical cancer that had come back multiple times or spread to other parts of the body and got worse on or after treatment with chemotherapy (including platinum-based chemotherapy), were treated with Tivdak.

At a median follow-up of 10 months:

Tivdak can damage the corneal epithelium, the clear layer of tissue covering the pupil and iris, and the conjunctiva. This can result in dry eyes, eye redness or irritation, corneal ulcers, blurry vision, worsening vision, and vision loss. Eye exams are conducted prior to and during treatment in order to assess whether any cornea or conjunctiva damage has taken place. If problems arise, the administration of Tivdak is interrupted until the symptoms improve, or is permanently stopped.

Patients should immediately report any symptoms to their healthcare provider, who can then initiate actions to limit or reverse the side effects. For a more complete list of possible side effects, see the full prescribing information.