Imjudo is approved for:

Age: The safety and efficacy of Imjudo in patients under 18 years of age have not been established.
Pregnancy/Breastfeeding: Imjudo can cause harm to a fetus, and is not recommended for use during pregnancy. Patients who are able to become pregnant should use effective birth control during treatment and for at least 3 months after the last dose of Imjudo. The risks associated with Imjudo during breastfeeding are not known and cannot be ruled out; patients are advised not to breastfeed during treatment and for 3 months after the last dose of Imjudo. Patients should also refer to the prescribing info of drugs administered in combination with Imjudo.

Imjudo is an antibody that attaches to a molecule called CTLA-4, which is present on the surface of T cells – the primary immune cells involved in the killing of cancer cells.

Before T cells can kill cancer cells, they first need to be “woken up”, or activated, and then they have to multiply to launch a potent attack. To help activate T cells, vigilant antigen-presenting cells patrol the body, pick up evidence of cancer, and travel to the lymph nodes to present this evidence to the T cells. If a particular T cell recognizes the evidence of cancer, it begins to wake up. However, to be fully activated for the cancer battle, T cells need a “caffeine” boost. This boost occurs when an activating molecule called CD28 on the surface of T cells interacts with molecules called CD80 or CD86 on the surface of antigen-presenting cells. However, shortly after the boost occurs, CTLA-4 shows up on the surface of T cells and competes with CD28 for the attention of CD80 or CD86, keeping the T cells from getting too much of the “caffeine” boost. Thus, CTLA-4 acts as a brake that keeps the T cells from creating an immune reaction that gets out of control, which could damage healthy tissues. Unfortunately, in cancer, the interaction between CTLA-4 and CD80/CD86 can prevent T cells from becoming activated enough to kill the cancer cells.

Imjudo binds to the CTLA-4 molecules on T cells in such a way that blocks the interaction between CTLA-4 and CD80/CD86 and allows the CD28 molecules on T cells to keep interacting with CD80/CD86 to fully activate the T cells, which is needed to attack cancer. Once the T cells are fully activated, they multiply to create a large army of potent T cells that can hunt down cancer cells throughout the body and kill them wherever they are found.

There may be other ways in which Imjudo helps destroy the cancer, and they are currently under investigation. 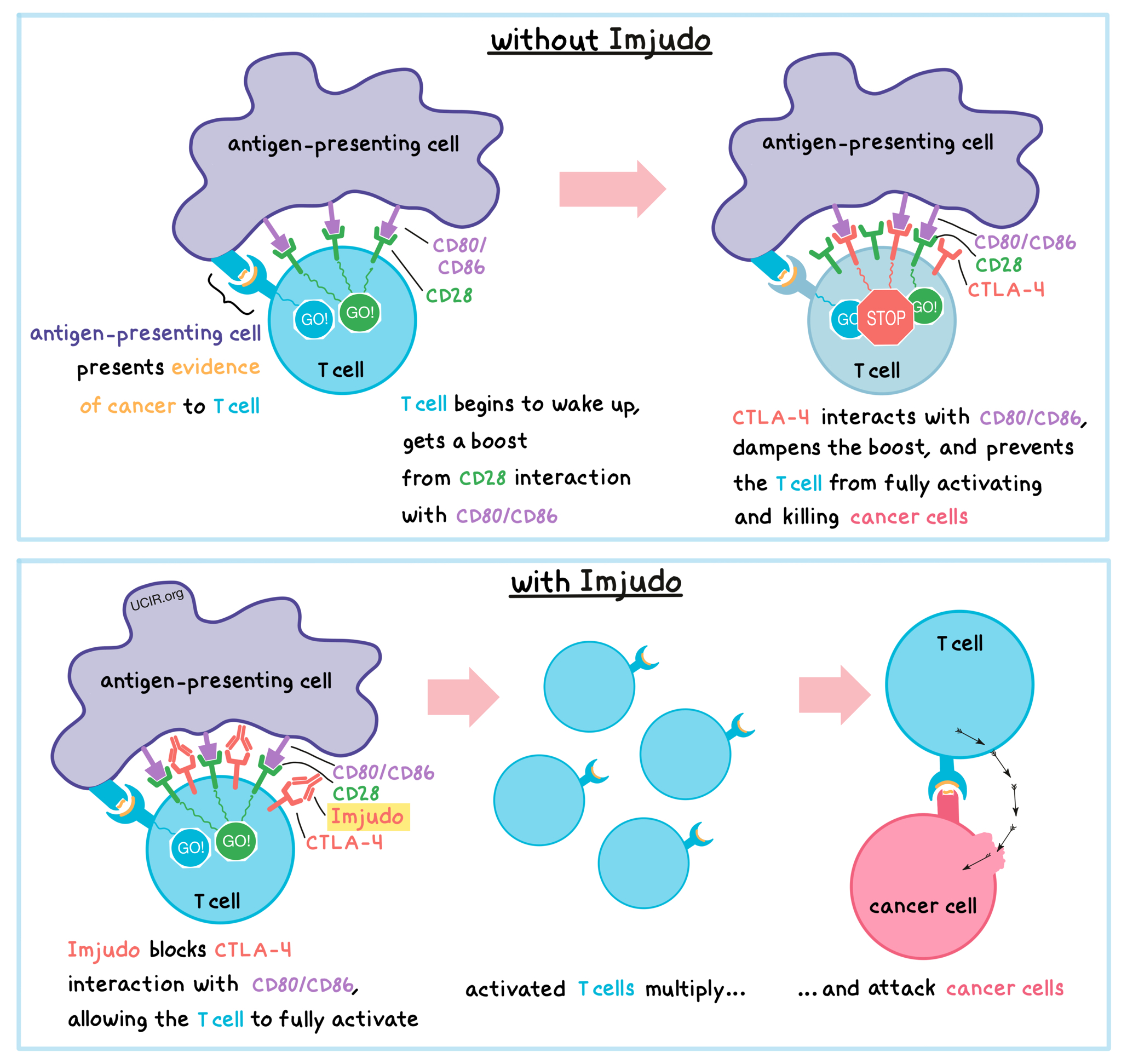 The most common side effects of Imjudo include fatigue, diarrhea, belly ache, itching, rash, and pain in the muscles, bones, nerves, ligaments, and tendons.

Imjudo can cause the patient’s T cells to attack healthy cells throughout the body. Because of this, Imjudo can cause side effects that may involve any organ, can become serious or life-threatening, and may lead to death. Some of the serious side effects related to Imjudo include inflammation of the lungs, brain, liver (which can lead to liver failure), kidneys (which can lead to kidney failure), or colon (which can result in tears or holes in the intestine). Additionally, problems can arise with hormone glands (including thyroid, pituitary, and adrenal glands, as well as the pancreas), and nerves (which can lead to paralysis). Skin rash (which could become severe and life-threatening) and reactions related to the infusion may also occur.