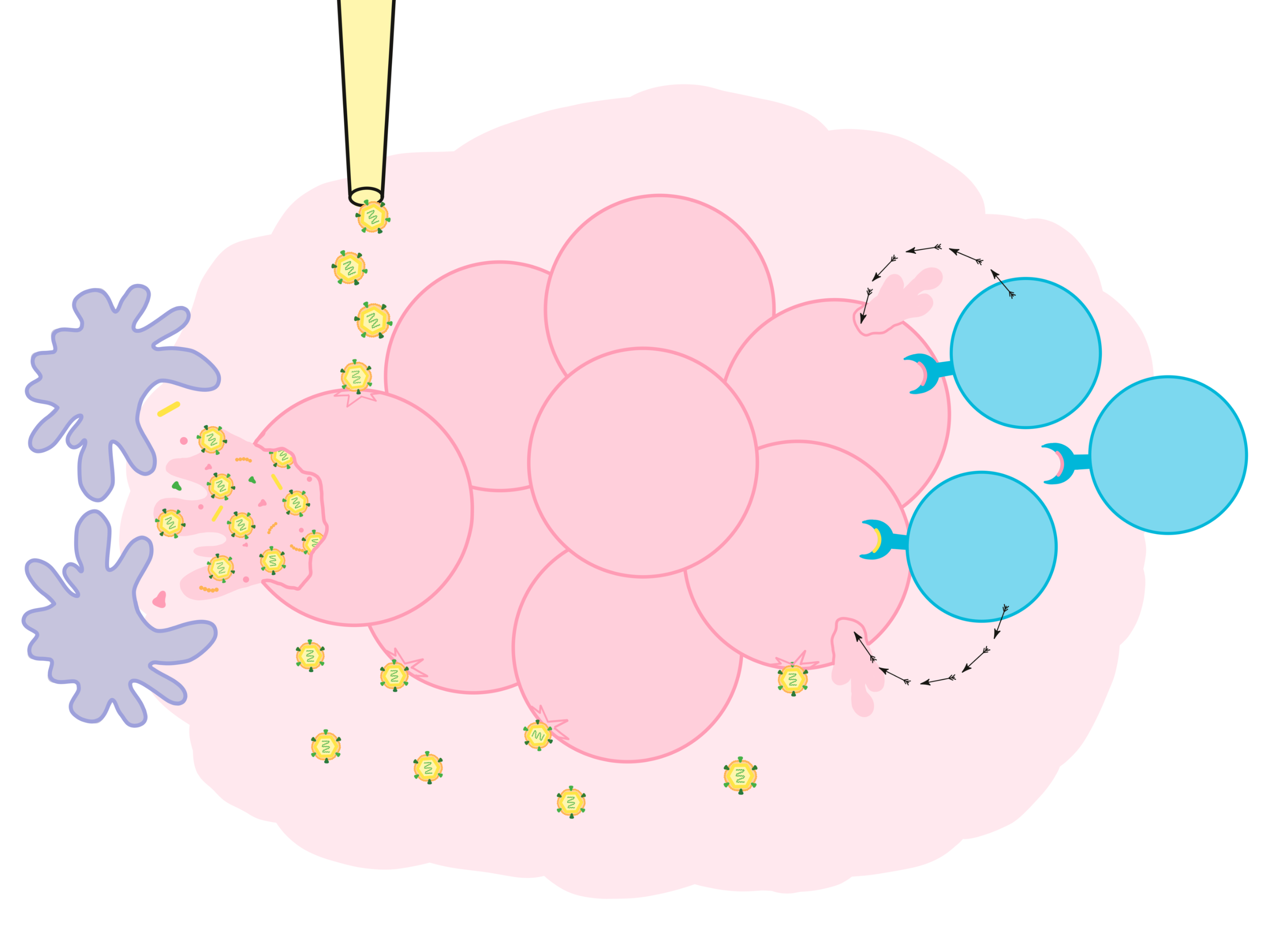 What are oncolytic viruses?

Viruses are tiny microorganisms which infect living creatures such as animals and people to reproduce and ultimately escape to infect others. Well-known viruses are the common cold virus, the flu virus, and HIV.

There are many different types and subtypes of viruses, however, they all share the same basic structure.Viruses carry a small amount of their own genetic material (DNA or RNA) enclosed in a sturdy shell called a capsid, which is sometimes surrounded by an outer membrane called the envelope. Surface proteins displayed on the membrane (or on the capsid if there is no membrane) are used by the virus to attach to the cells it is trying to infect.

The details of how each virus reproduces is different, but in general, viruses reproduce by: 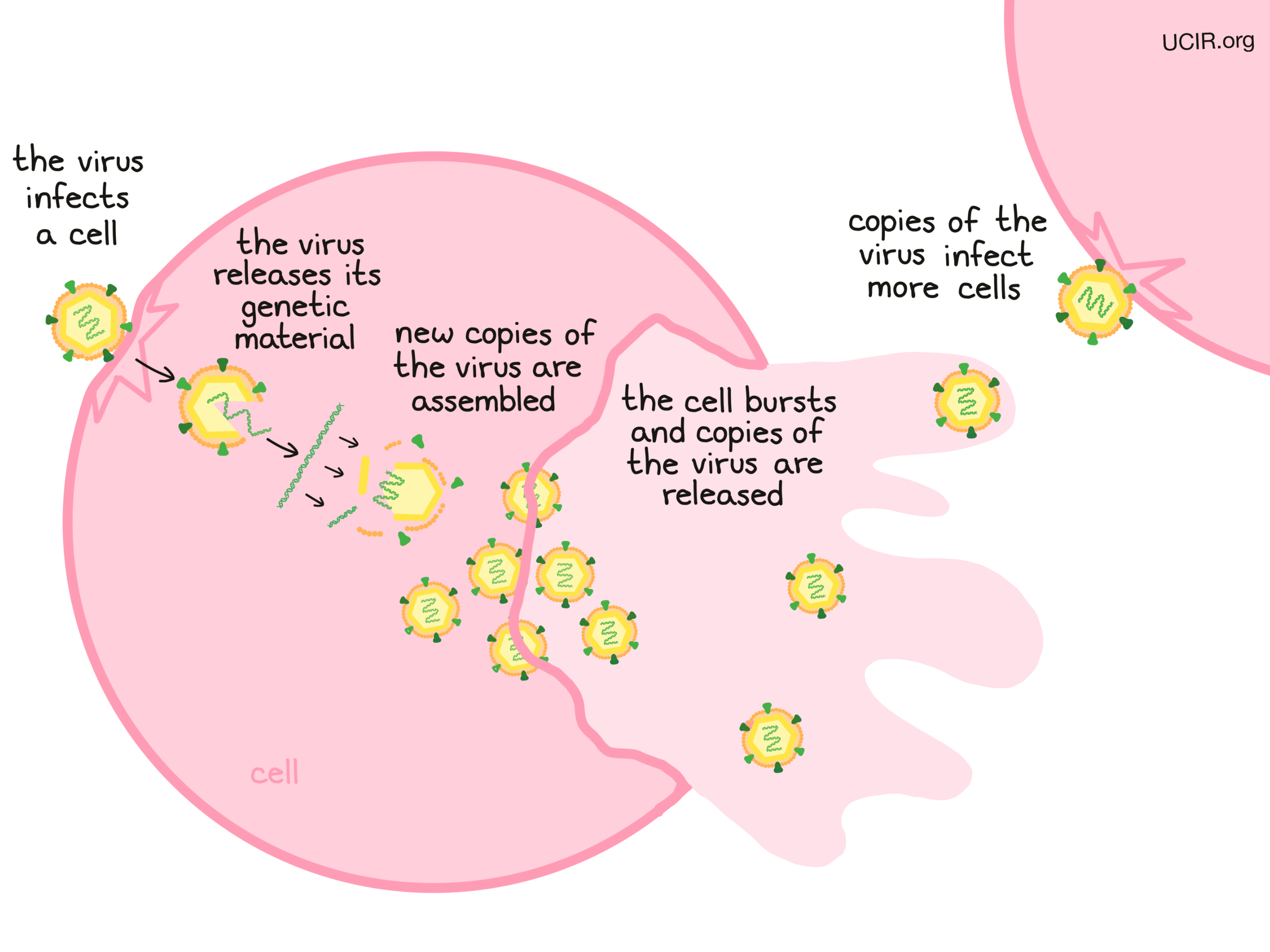 Oncolytic viruses preferentially infect and kill cancer cells while leaving healthy cells largely untouched. “Onco” is derived from “onkos”, meaning mass, in reference to tumor mass. “Lytic” is derived from “lysis”, which means to break into small pieces. Thus, oncolytic viruses are those that cause cancer cells to break apart and die as part of the virus’s reproduction process.

Certain cancer types are prone to infection with oncolytic viruses for a number of reasons. Some tumors are surrounded and infiltrated by leaky blood vessels, allowing the oncolytic viruses to enter the tumor tissue. Viruses also grow better in cells that are rapidly dividing, like cancer cells, rather than in normal cells, which divide less frequently. Many cancer cells also have defects in their defense mechanisms, leaving them more vulnerable to a viral attack. 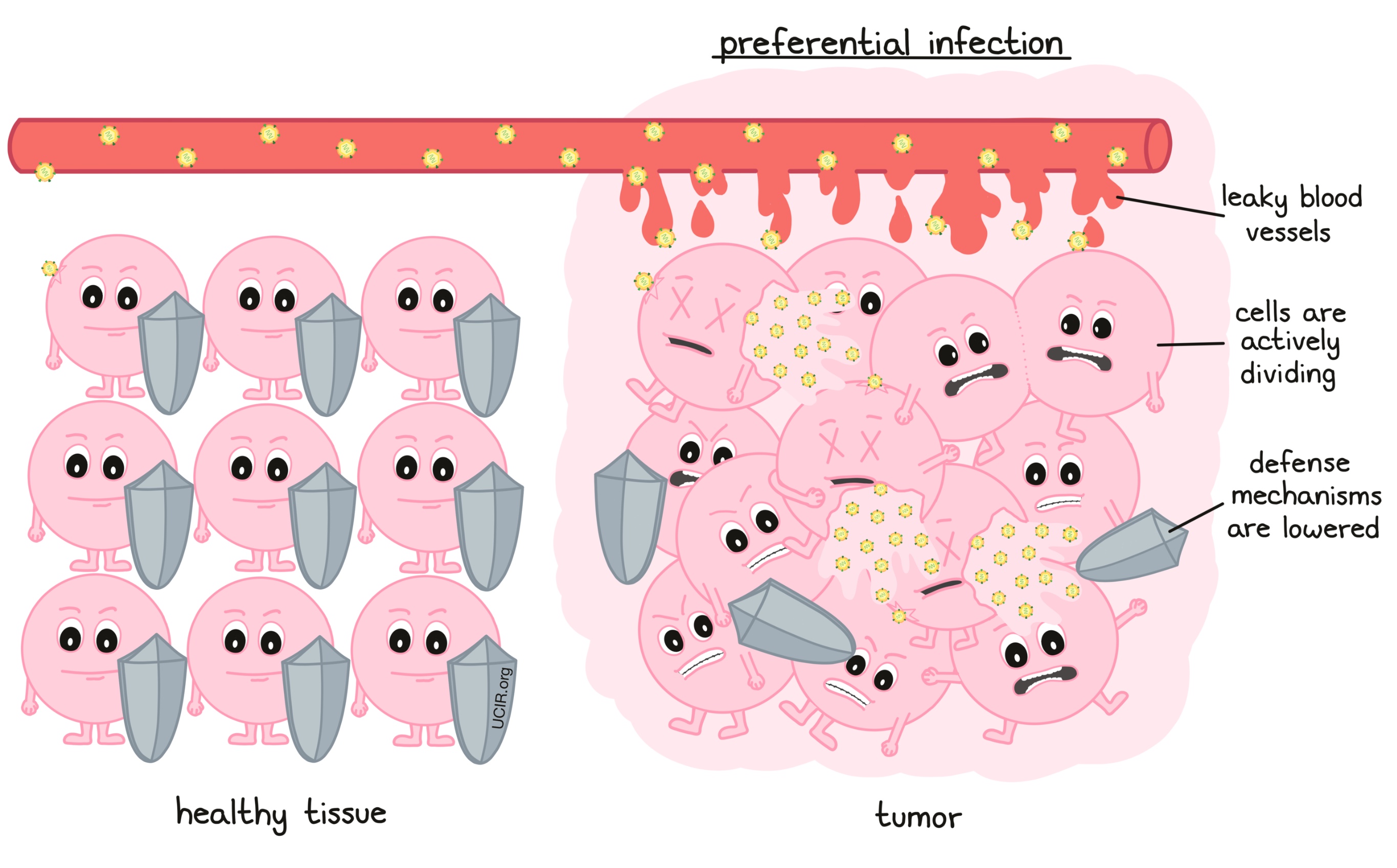 How do oncolytic viruses trigger an immune response?

Viruses by themselves are recognized as a threat to the body. When a virus infects a cell, it triggers a cascading series of “antiviral” responses. The infected cell tries to limit viral reproduction within itself and also sends out molecules that act as warning signals, telling neighboring cells to activate their defense systems.

The molecules made by infected cells also alert the immune system and cause a local immune reaction by:

These natural immune-stimulating properties of viruses are critical for the goal of developing a body-wide anti-cancer immune response. 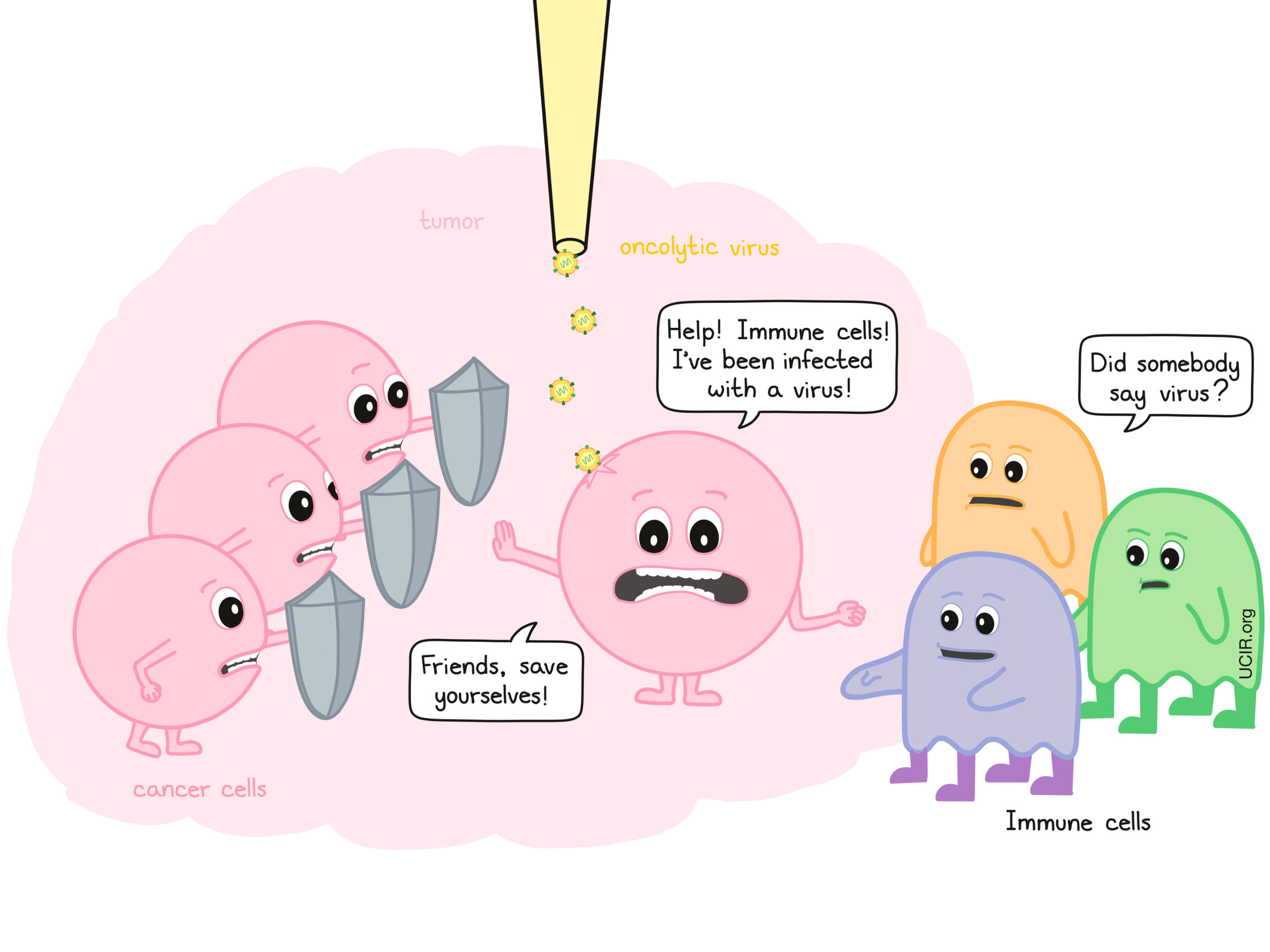 2. Cancer cells killed by oncolytic viruses promote the development of immune cells that circulate throughout the body and kill cancer cells at other sites

Immune cells called T cells can recognize and attack cells containing foreign molecules (like those from a virus) known as antigens. Similarly, cancer cells often make abnormal molecules, known as tumor antigens, although these often do not trigger a strong immune response.

When oncolytic viruses infect and destroy cancer cells, debris is released by the dying cells. This debris includes not only copies of the virus and viral antigens, but also cancer cell debris containing tumor antigens and molecules that alert the immune system of damage. These molecules attract the attention of antigen-presenting cells, which patrol the body and pick up antigens as evidence of a threat. 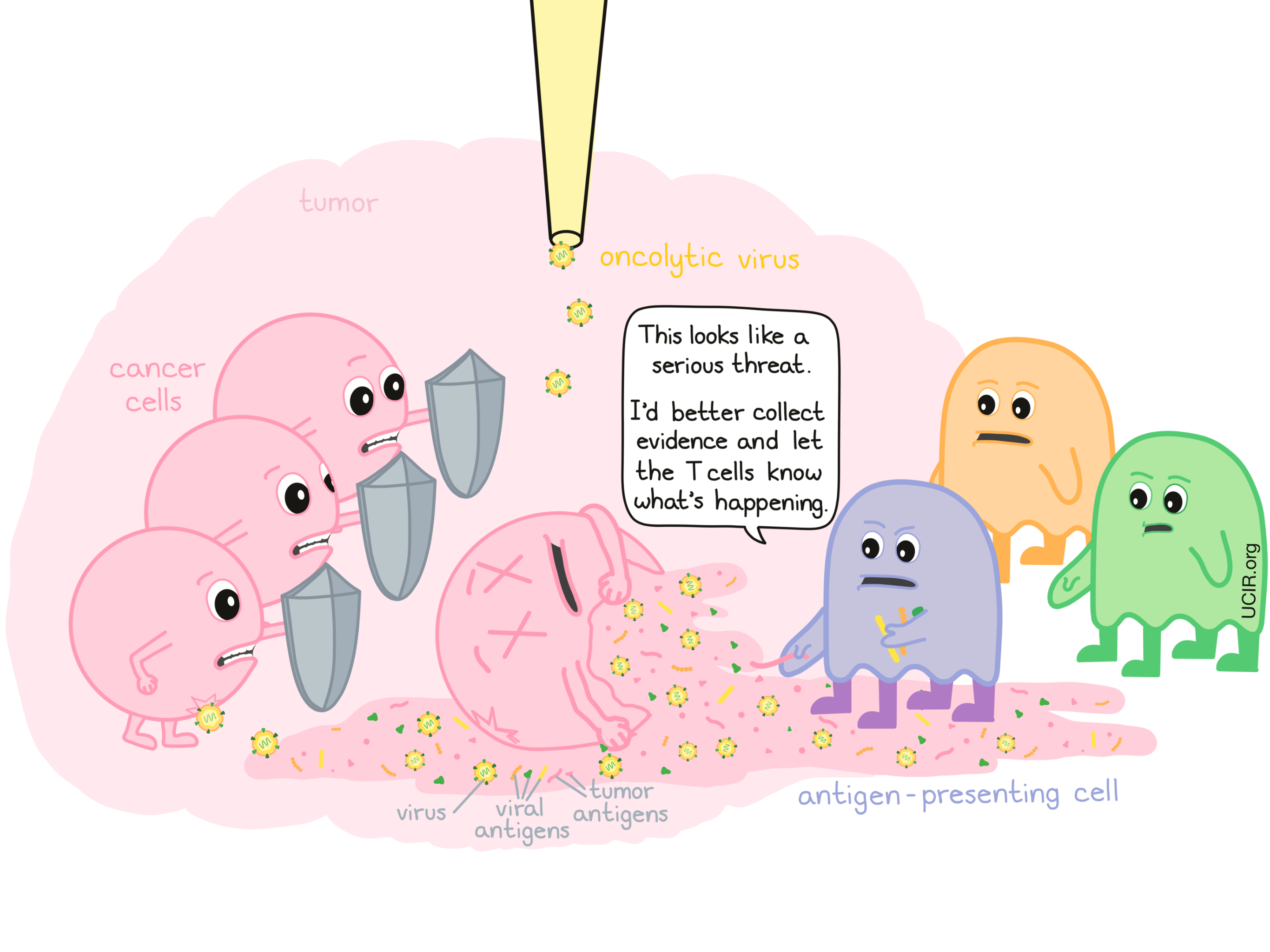 The antigen-presenting cells then travel to the lymph nodes and present this evidence to T cells; if the evidence is suspicious enough, then T cells become activated. 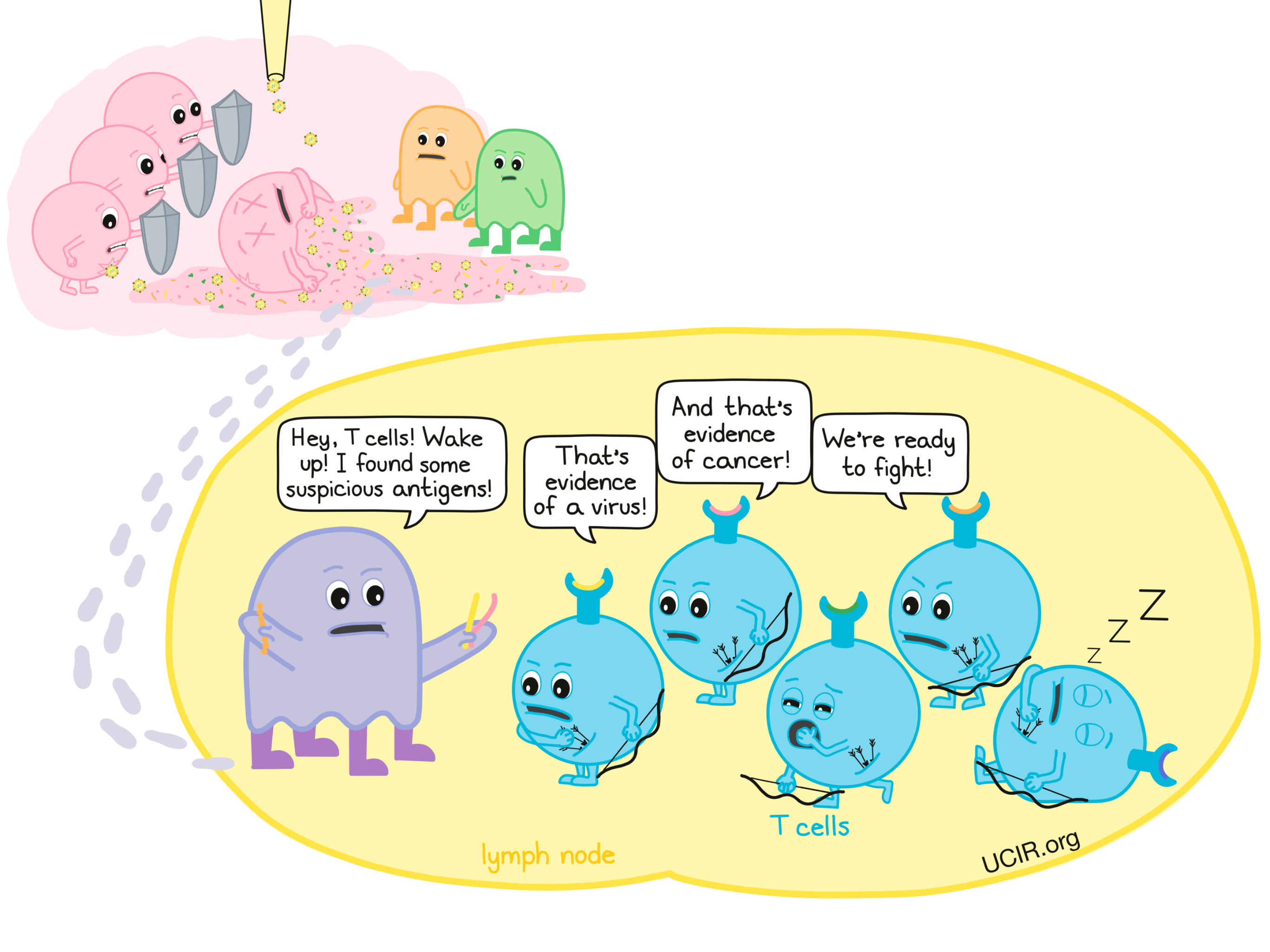 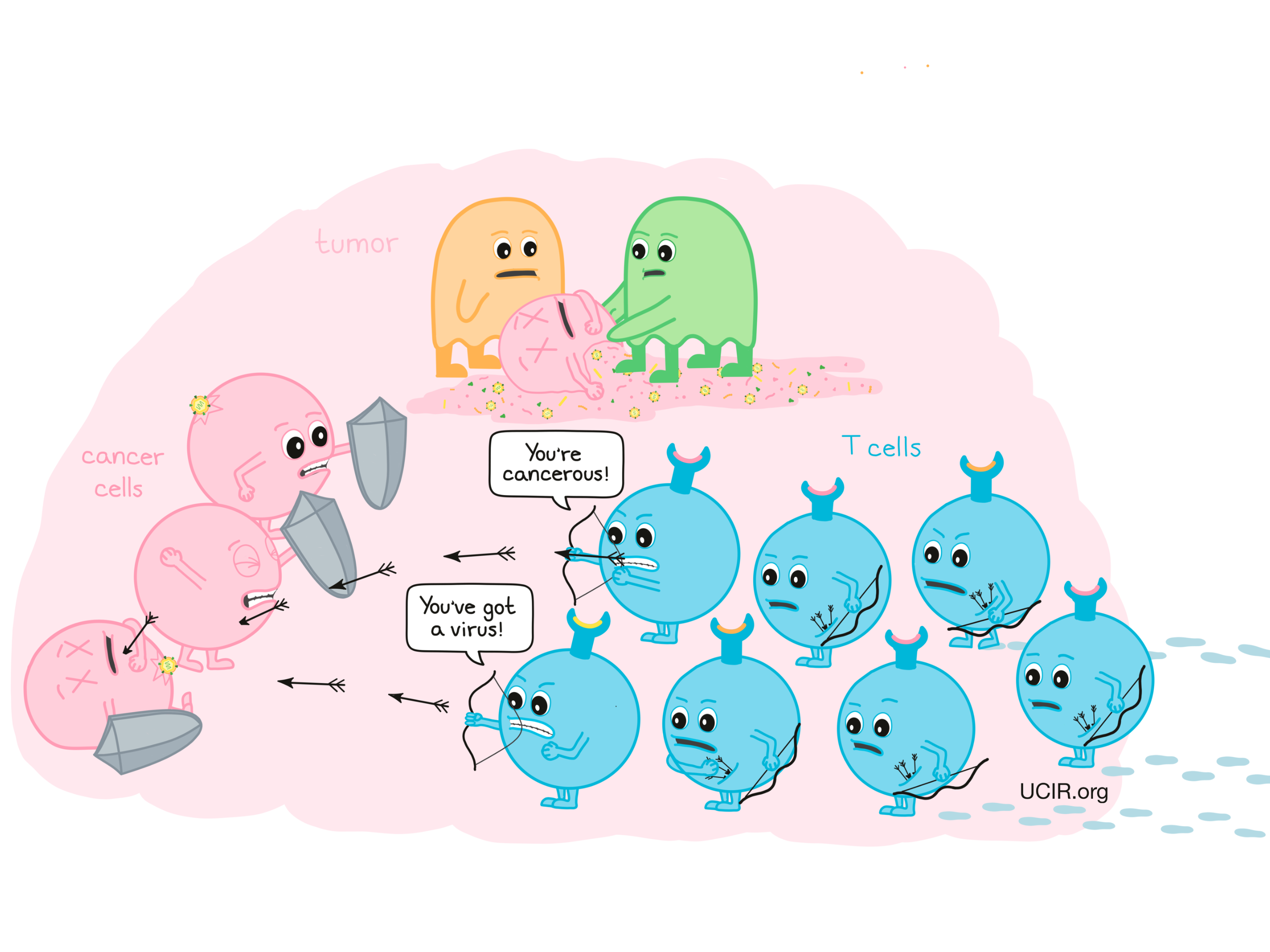 T cells can enhance the eradication of the tumor that was directly treated with the oncolytic virus, but can also circulate throughout the body and attack cancer cells that have spread to other sites. In addition, “memory” T cells are formed that can persist in the body for many years and are able to recognize and quickly restart an immune response to antigens they remember. 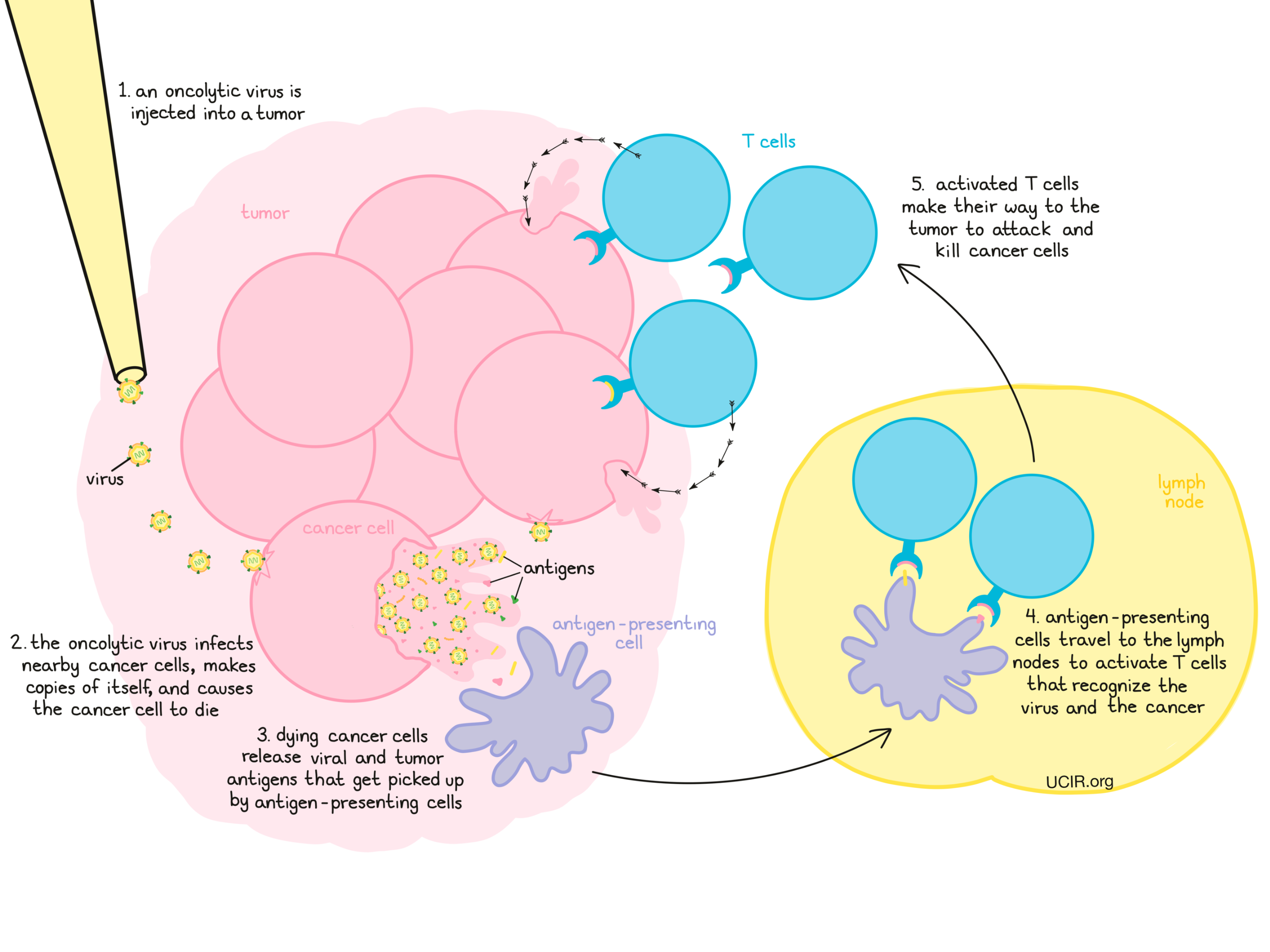 Oncolytic viruses in the clinic

In the more than a century since doctors noted that viral infections had anti-cancer effects in some patients, many viruses and treatment strategies were tested, but with only limited success.

A breakthrough came with the development of a carefully designed oncolytic virus, Imlygic (talimogene laherparepvec). Imlygic is based on herpes simplex virus type 1 (the virus that causes common cold sores), but the virus has been genetically engineered to improve its safety and immune-stimulating properties. The first clinical trials showed that when the virus was directly injected into tumors, it caused them to shrink. Importantly, injection of the oncolytic virus at one tumor site also caused tumors at distant, untreated sites to shrink. Further studies showed that the virus had stimulated an anti-cancer immune response.

Imlygic is approved for clinical use in melanoma and is now being tested in many other cancer types. Its success has re-energized efforts to explore and improve on the anti-cancer activity of other viruses. Many clinical trials that are recruiting patients can be found at clinicaltrials.gov.

Although some oncolytic viruses have shown very promising results in the clinic, research and development continues in multiple areas:

Administration of oncolytic viruses in the clinic

Viruses cannot spread throughout the body easily, so to increase the likelihood that the cancer cells get infected, oncolytic viruses are typically injected directly into tumor sites. Not all tumors are easily accessible though, and some guidance techniques are currently available, but more sophisticated techniques need to be developed to allow injection into difficult-to-reach tumors. In addition, existing viruses that can circulate in the blood and penetrate tissues are being developed as oncolytic viruses.

While oncolytic viruses prefer to infect cancer cells, healthy cells may still get infected, or cancer cells may not be effectively infected or killed. Strategies to improve preferential infection and cancer cell killing include:

Strategies to improve the immune-stimulating activity of oncolytic viruses include:

The significant anti-cancer effect seen with Imlygic in causing tumors to shrink not only at injected tumor sites, but also at distant sites, proves the immune-stimulating activity of the viral infection. Combining oncolytic viruses with conventional cancer therapeutics that have immune-stimulating properties (e.g. chemotherapy, radiation) or with modern immunotherapies (e.g. checkpoint blockade)is a logical strategy to further enhance the antitumor immune responses that are initiated by oncolytic viruses.