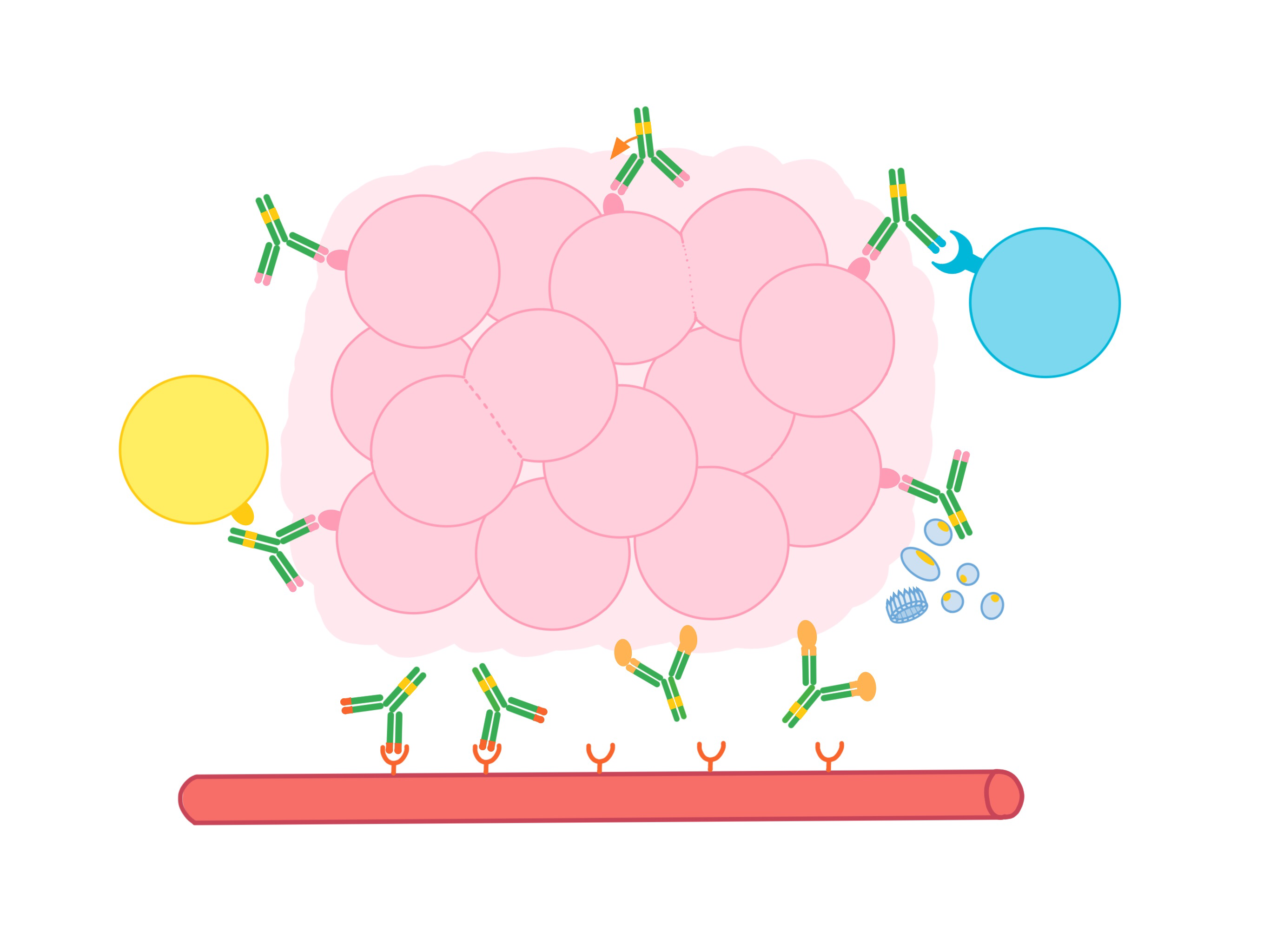 What is antibody cancer immunotherapy?

Antibodies are a type of molecule that the human immune system uses to detect and target things that don’t belong in the body, including bacteria, viruses, and cancer cells. The targets of antibodies can be molecules floating freely in body fluids, molecules on the surface of invading viruses or bacteria, or molecules on the surface of a cell in the body. Antibodies can also very precisely recognize molecules that differentiate cancer cells from normal cells. By binding to the cancer cells, antibodies may work alone or may help the immune system to fight the cancer. 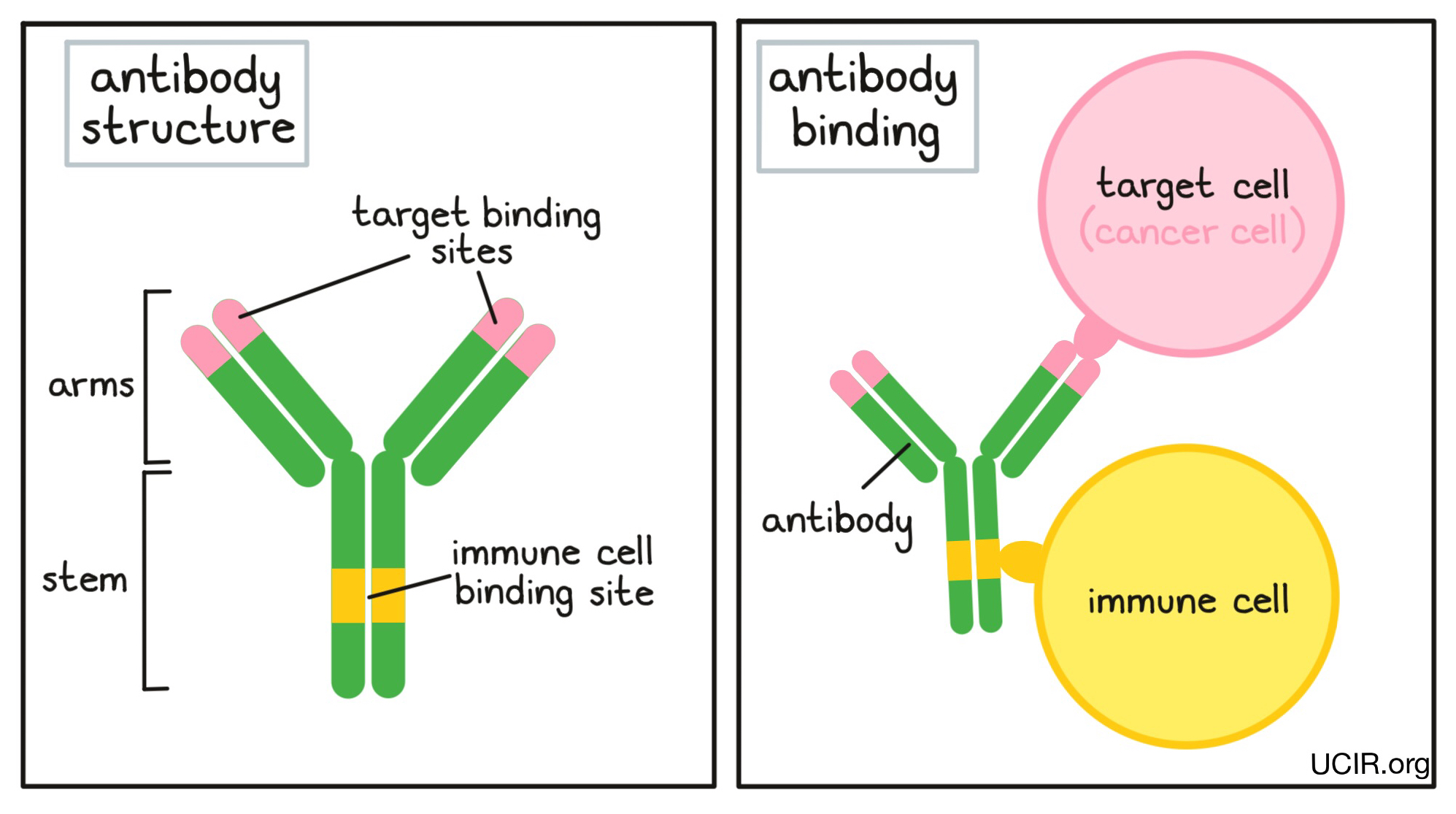 Antibodies are produced by immune cells called B cells. There are as many as a billion different B cells in a person’s body that circulate in search of invading organisms or molecules that don’t belong. Each B cell produces its own unique antibody, which allows the immune system to be prepared against almost any imaginable threat. When a B cell finds a target that its antibody can bind to, it matures and multiplies. This results in an army of identical B cells that can all produce and release the same antibody.

Cancer arises when normal cells in the body mutate and begin to multiply out of control. Since cancer cells are mutated, they may produce molecules that are abnormal enough to be recognized by the immune system, marking them as cells that don’t belong. When this happens, the immune system will react to the cancer cells in the same way it reacts to bacteria or viruses, and B cells will begin to produce antibodies, which may serve a number of different functions. Antibodies may block the function of abnormal molecules on cancer cells, stop or slow down tumor growth, stop cancer cells from spreading to other parts of the body, mark cancer cells for elimination by the immune system, or amplify an immune response. If the body’s natural immune response to the cancer is not strong enough, however, the cancer will continue to grow.

While antibodies are produced naturally by the body, scientists have found ways to develop and manufacture antibodies in laboratories for use as cancer-fighting drugs. When scientists want to utilize a particular antibody, they identify the B cells that make it, grow the B cells, and harvest the antibodies. Further, scientists can create modified antibodies, either by altering the genetic code of the B cells so that they produce antibodies with more desirable properties, or by changing the antibodies after they have been produced.

Many useful antibodies are developed in mice (or other animals), but before they can be used in patients, these antibodies need to be “humanized” to prevent them from being recognized as “foreign” by the patient's immune system. Humanized antibodies are made by changing the genetic code of an antibody that was developed in an animal and replacing all but the target binding sites (the tips of the arms of the “Y”) with the genetic code from a human antibody. Some antibody drugs may also be labeled as “chimeric” antibodies; this means that they are nearly humanized, but a little more of the original animal antibody was kept. 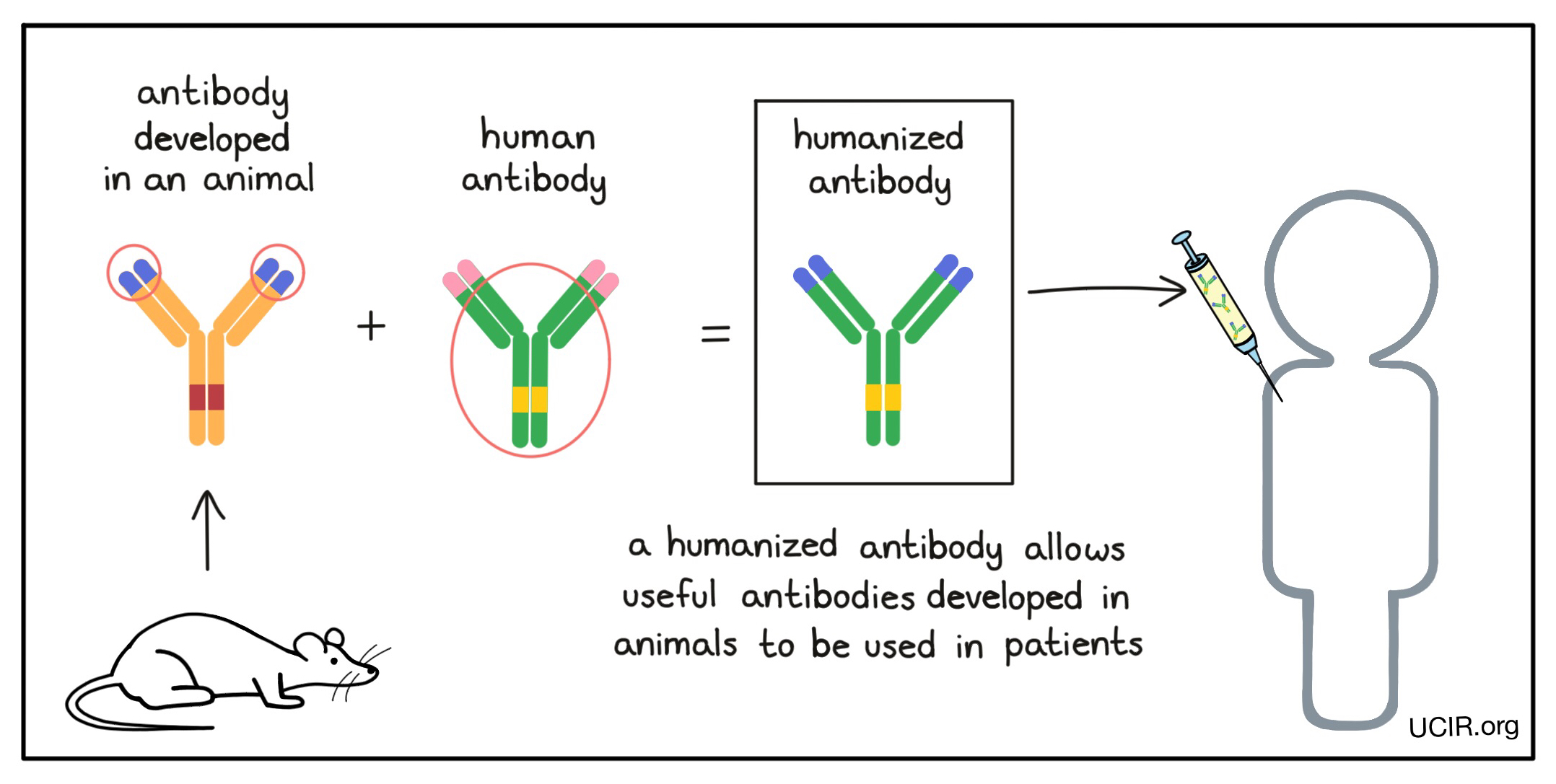 Antibodies are used in cancer immunotherapy to: 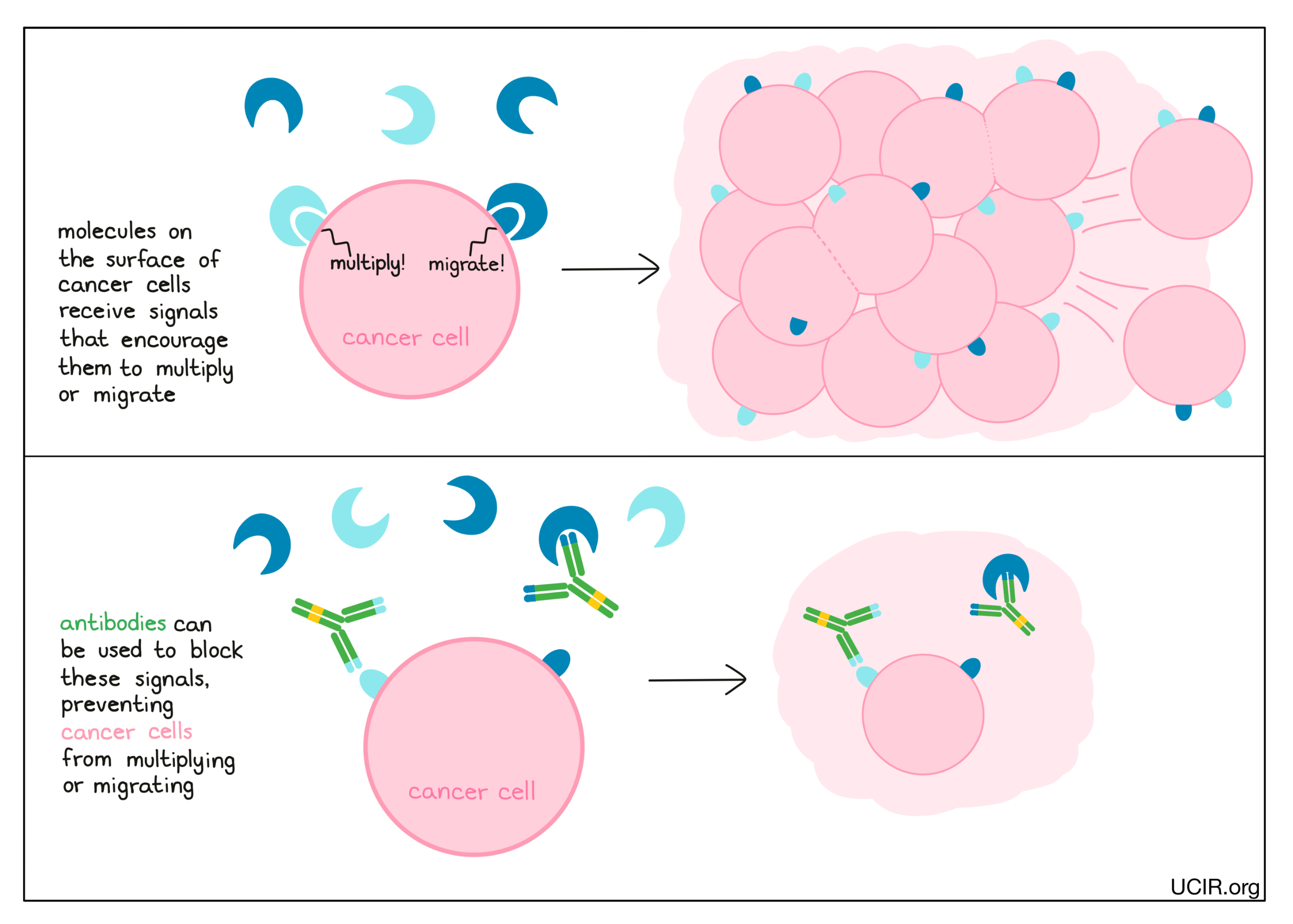 HER2 (Human Epidermal growth factor Receptor 2) is a molecule found on the surface of normal cells. When one molecule of HER2 binds to another molecule of either HER2 or a molecule that closely resembles HER2 (like HER3) on the surface of the same cell, the pair sends a signal to the cell that it is time to multiply. In cancer cells, the number of HER2 molecules may be significantly increased, leading to more pairings of HER2 molecules and thus, more multiplication of the cancer cells. Antibodies have been developed to bind to HER2 on the surface of cancer cells and prevent HER2 from forming signaling pairs. In addition, antibodies bound to HER2 can lead to HER2 molecules being removed from the cell’s surface, thus further reducing growth signaling. One prominent anti-HER2 antibody is called trastuzumab.

IL-6 (Interleukin 6) is a molecule that circulates throughout the body and can bind to a variety of cells, stimulating them in different ways. Recent studies have shown that IL-6 may help cancer cells to spread and “seed”, forming tumors in new locations. Based on these findings, scientists developed an antibody called siltuximab, which blocks the binding of IL-6 to its receptor on the surface of cells. Siltuximab was approved for the treatment of Multicentric Castleman's Disease, a cancer-like disease that depends on IL-6 signaling for growth.

Antibodies can block the activity of cells that help nourish tumors 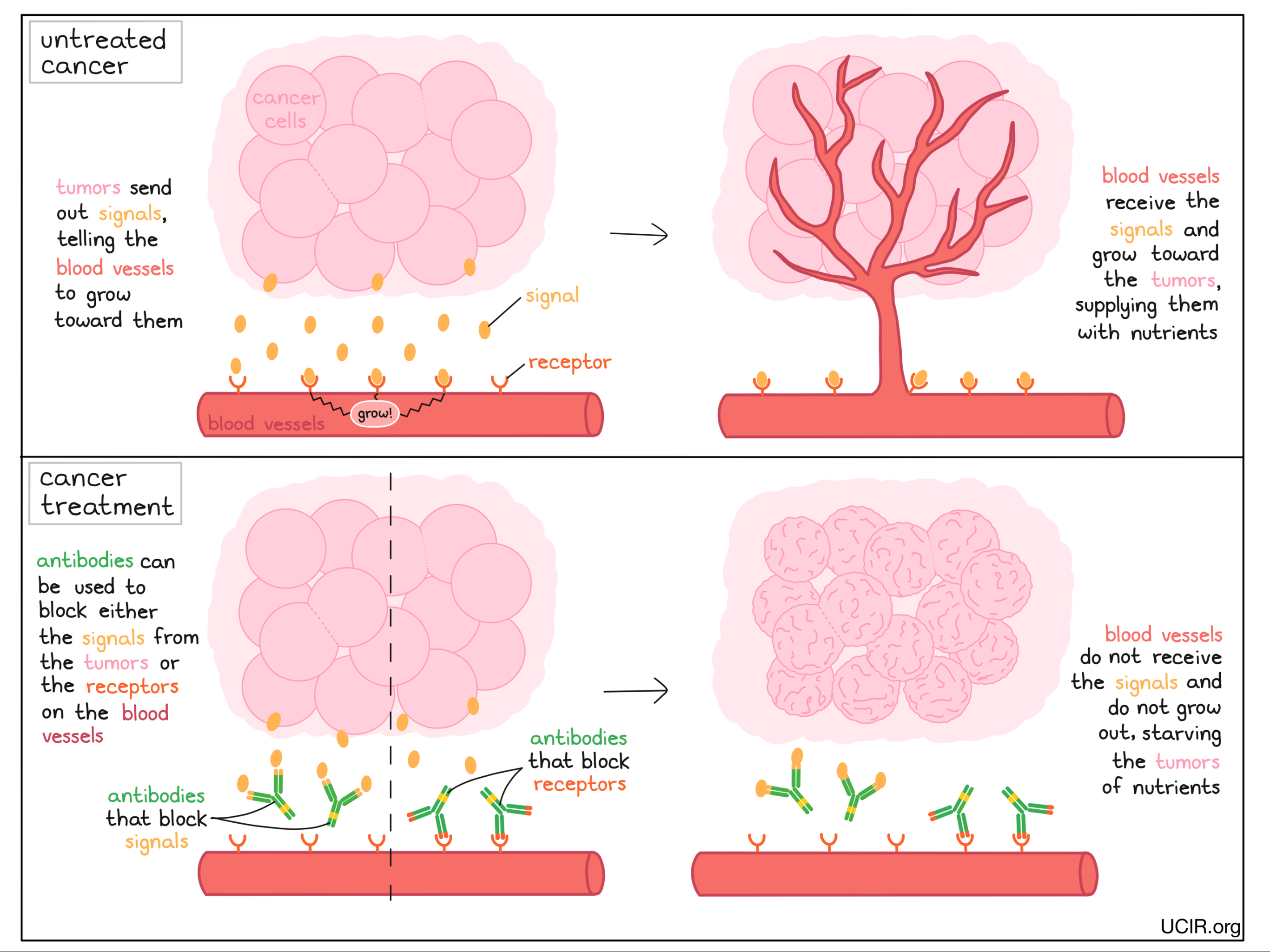 An alternative antibody called ramucirumab also blocks the ability of VEGF to stimulate blood vessel growth by binding to and blocking the VEGF receptor on the blood vessels, thus preventing blood vessel development and tumor growth.

Since antibodies bind very specifically to their intended targets, they can be used to deliver chemotherapies or radioactive molecules directly to cancer cells, avoiding delivery to normal cells. Because the stem end of the “Y” shaped antibody molecule is not necessary for binding to a target, scientists can use this end of the molecule as a site to attach radioactive or cell-killing molecules. Within patients, the antibodies seek out and bind to cancer cells. The cancer cells then take in the antibodies, which deliver and release their deadly payload. Finding a target that is unique to the cancer cells or is abundant on cancer cells, but not on normal cells, is a challenge. Once such a target is identified, this strategy can be implemented. 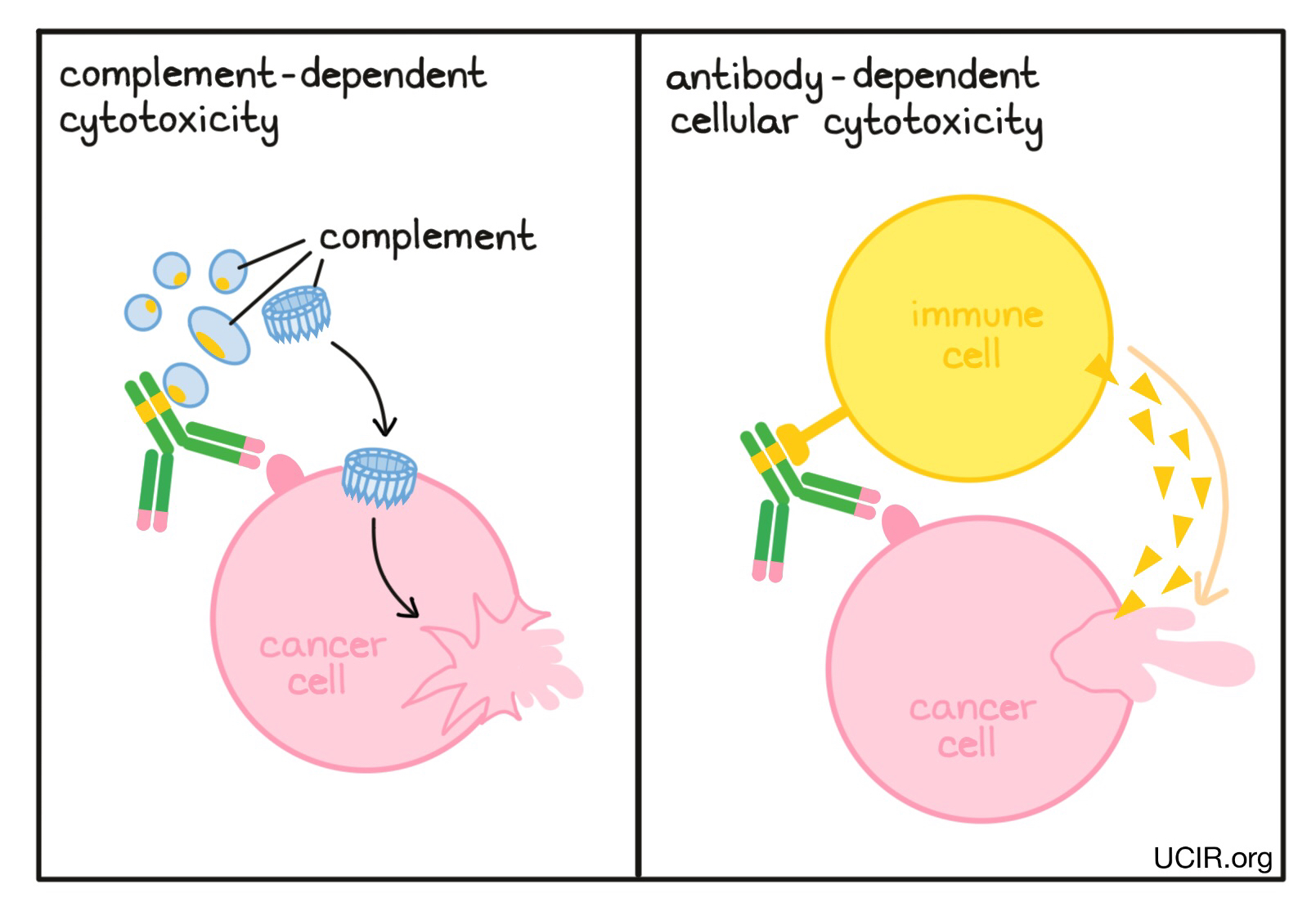 CD38 is a molecule found at low levels on the surface of many normal blood cells. However, multiple myeloma – a type of blood cancer – has particularly high levels of CD38. Daratizumab is an antibody that binds to CD38. The stem of daratizumab can attract and activate immune cells and molecules of the complement system to kill the cancer cells to which it is bound.

The two arms of an antibody can be modified so that the tip of each arm binds to different targets. Antibodies engineered with the ability to bind two different molecules are called bispecific antibodies and can be used to build a bridge connecting a cancer cell to an immune cell. One arm of the engineered antibody binds to a molecule that is unique to (or abundantly present on) cancer cells compared to normal cells, while the other arm binds to a molecule on the surface of a T cell (the key cell in the immune system’s fight against cancer) and turns on the cell-killing function of the T cell. In this way, the antibody acts like a deadly matchmaker, linking cancer cells up with the immune cells that could kill them.

Blinatumomab, also called Blincyto, belongs to a class of engineered antibodies that link cancer cells with immune cells capable of killing their targets. One arm of Blincyto binds to CD19, a molecule found on the surface of most B cells but also on acute lymphoblastic leukemia (ALL) cells. The second arm binds to CD3, a protein found on T cells that is part of the T cell Receptor. The drug works by linking these two cell types. Binding CD3 on the T cell activates the T cell to kill the target cell it is linked to. Blincyto was the first approved bispecific antibody and is an example of how scientists can more dramatically engineer antibodies. Rather than just changing the tips of the arms of an antibody so that it could bridge two cells, scientists actually made a mini-antibody that consisted of only the two tips of the antibody arms. 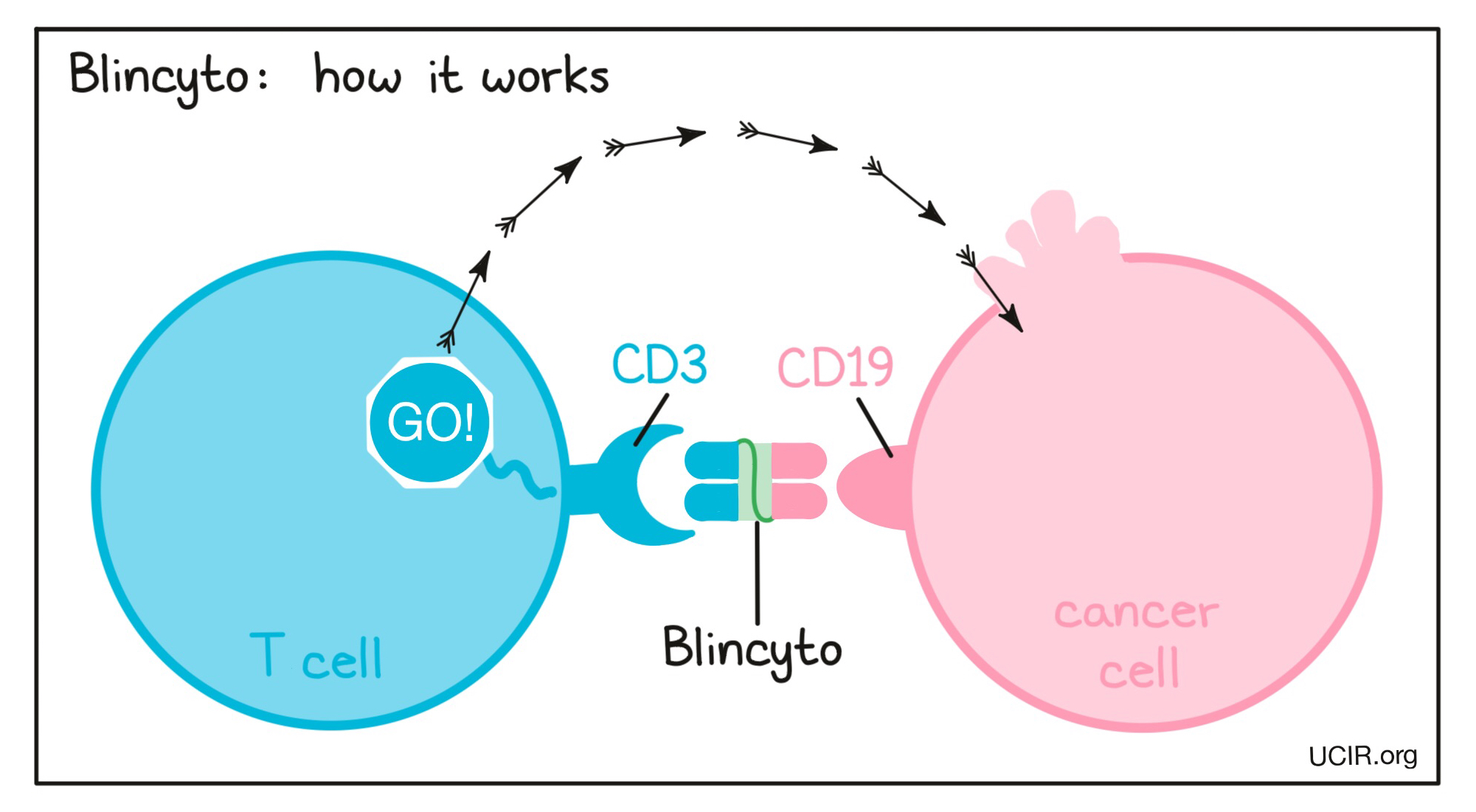 Antibodies can keep antitumor immune cells from shutting down

CTLA-4 is a molecule that appears on the surface of activated T cells – the key cells in the immune system’s fight against cancer. When CTLA-4 molecules are triggered, they send a “stop” signal to the T cell. An antibody drug called ipilimumab blocks CTLA-4 and prevents it from being triggered, which helps sustain T cell activity against cancer. Ipilimumab has been effective and is approved for the treatment of metastatic melanoma, renal cell carcinoma, and colorectal cancer.

PD-1 is a molecule that appears on the surface of T cells after activation. When PD-1 molecules are triggered, they send a “stop” signal to the T cell. Several antibody drugs have been developed to block PD-1 and prevent the “stop” signal from being triggered, which helps sustain T cell activity against cancer. Further, some antibody drugs have been developed to block the molecule PD-L1, which is the molecule that triggers PD-1. The effect of blocking PD-L1 is very similar to the effect of blocking PD-1.