What is an immune checkpoint?

The immune system plays a major role in fighting off threats within the body, including bacterial infections, viral infections, and cancer. Specialized cells called antigen-presenting cells patrol the body and pick up evidence of potential threats. They bring this evidence to the closest lymph nodes, where they “present” the evidence to T cells –the active warriors of the immune system. If the T cells recognize the threat, they become activated, multiply into an army, and go out to hunt and kill threatening cells wherever they are found.

Immune checkpoints are the “brakes” of the immune system. They play a key role in:

While checkpoints serve as an important safety mechanism, in some cases, they may slow down desirable immune responses too soon.

When a patient is diagnosed with cancer, it means that mutated, cancerous cells have formed in the body. The immune system may be able to recognize that these cells are dangerous and do not belong in the body, but checkpoints may slow the immune cells down before they are able to attack and kill a tumor that is forming. A growing tumor may even take advantage of checkpoints to defend itself against the attacking T cells, producing the exact molecules that press the brakes on T cells and slow down their activity. 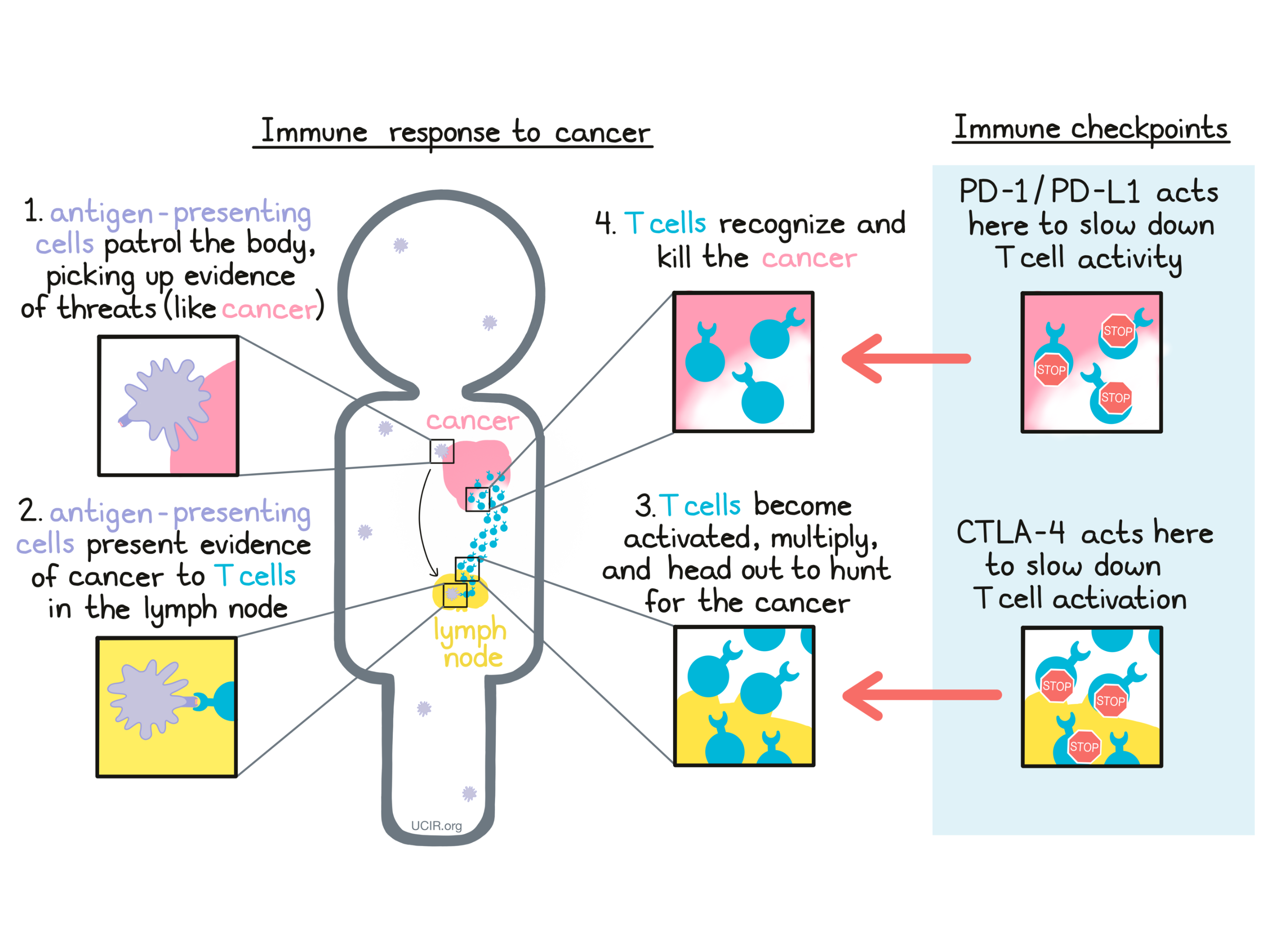 Cells that have been infected by a virus or bacteria and cells that are mutated and cancerous often contain foreign or abnormal molecules that are not normally present on healthy cells. The immune system recognizes these molecules, called antigens, as signs that a cell does not belong in the body. Antigen-presenting cells patrol the body and collect antigens as evidence of potential threats. They then travel to the lymph nodes, which are scattered throughout the body, and “present” the evidence to T cells, which are responsible for attacking and killing dangerous cells. T cells are always present in the body, but mostly lie in wait until a threat is presented.

Before T cells can go out to hunt for any threats, they need to be “woken up” or activated by antigen-presenting cells. Antigen-presenting cells that have picked up antigens and traveled to the closest lymph nodes “present” the antigens to T cells as evidence of a potential threat. If a particular T cell recognizes the evidence, then it will take that as the first “go” signal.

To nudge the T cell further into action, the antigen-presenting cell provides a second “go” signal to the T cell by using molecules on its surface called CD80 and CD86 (CD80/CD86) to trigger activation buttons called CD28 on the T cell surface. If a T cell receives enough “go” signals, it will finally be convinced that the threat is real, and will prepare to patrol the body and hunt for any dangerous cells. 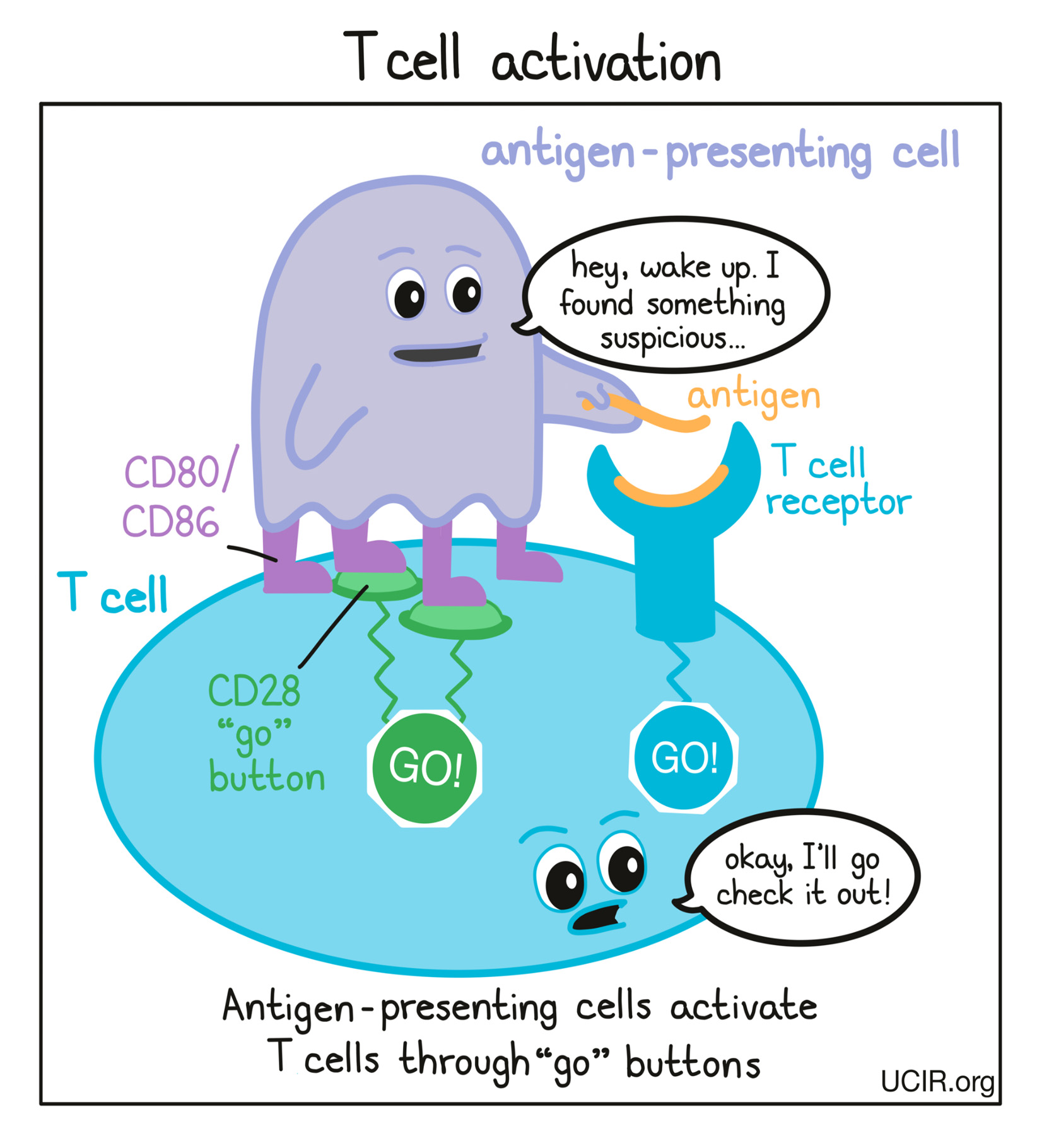 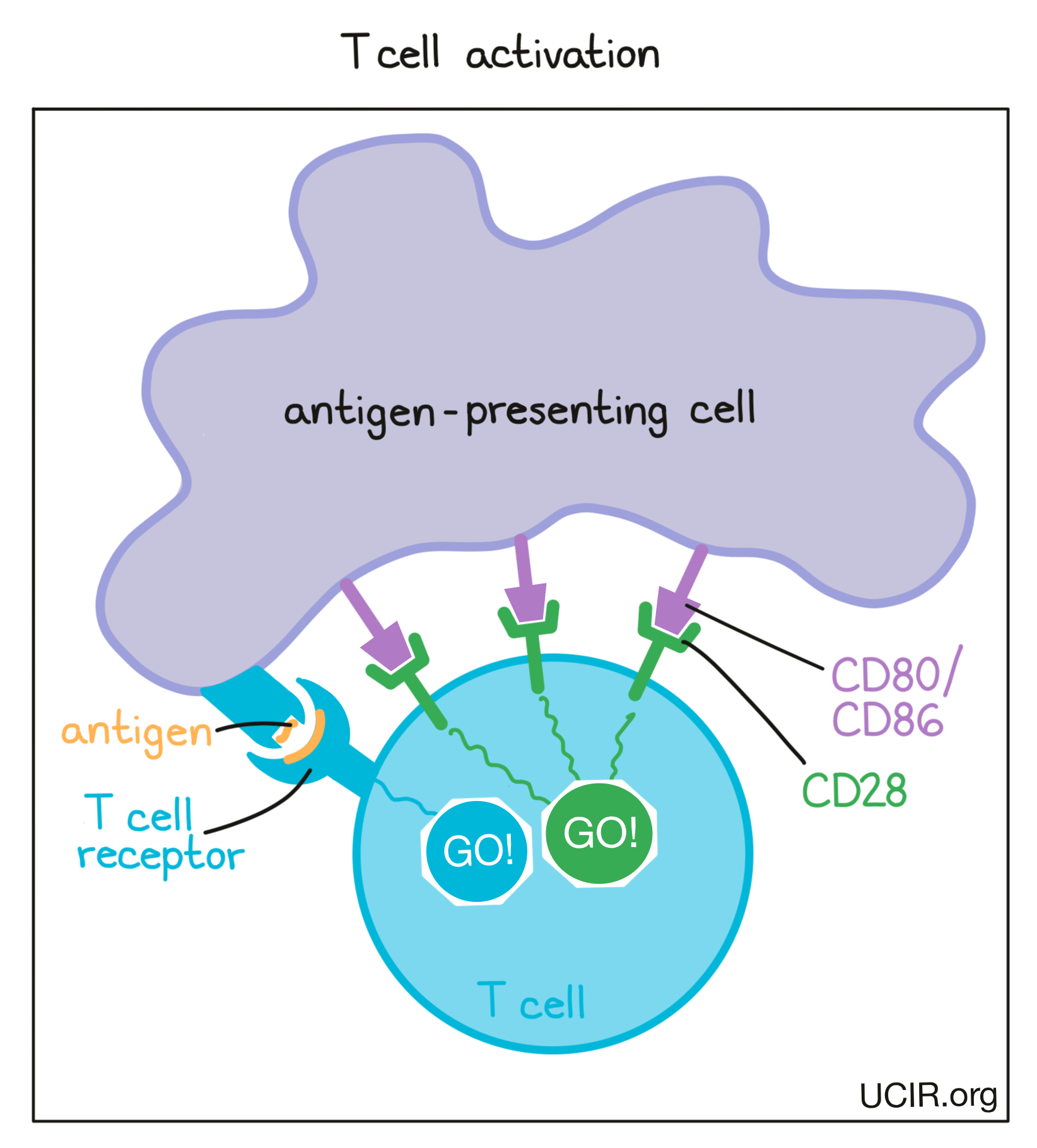 How does the CTLA-4 checkpoint work?

T cells have built-in systems called “checkpoints” that help them to not overreact to threats. One of these checkpoints is CTLA-4.

As T cells receive “go” signals from an antigen-presenting cell (via the T cell receptor and CD28) they begin to resist the stimulation by producing CTLA-4. CTLA-4 looks very similar to CD28, and like CD28, it draws the attention of CD80/CD86. While CD28 delivers a “go” signal, CTLA-4 delivers a “stop” signal. This means that when CD28 and CTLA-4 are both present on the surface of the T cell, they compete for the attention of CD80/CD86 on antigen-presenting cells that trigger them. If the “stop” signals outweigh the “go” signals, then T cell activation slows down, calming down the T cell and minimizing its ability to hunt and attack any potentially threatening cells. 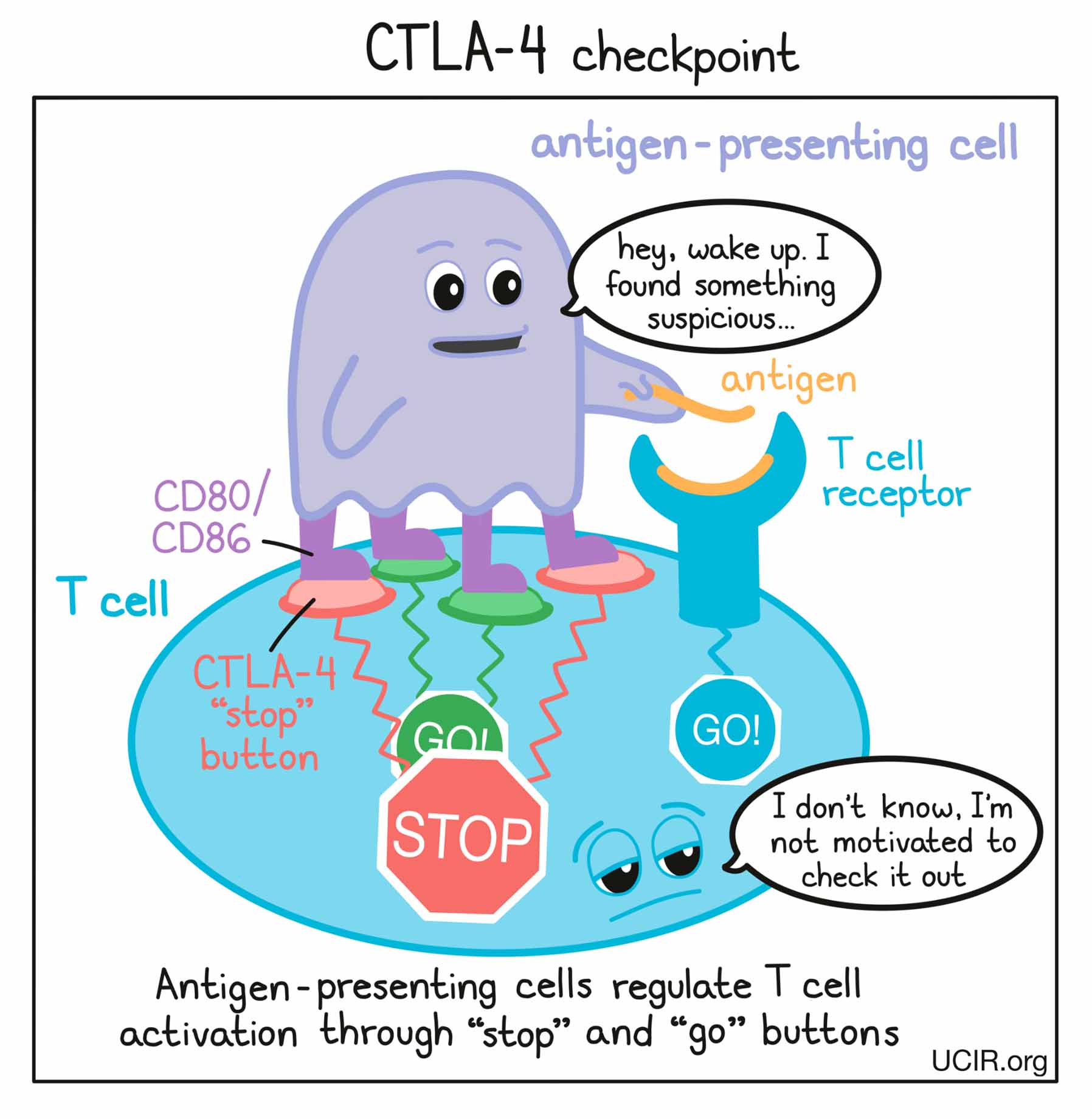 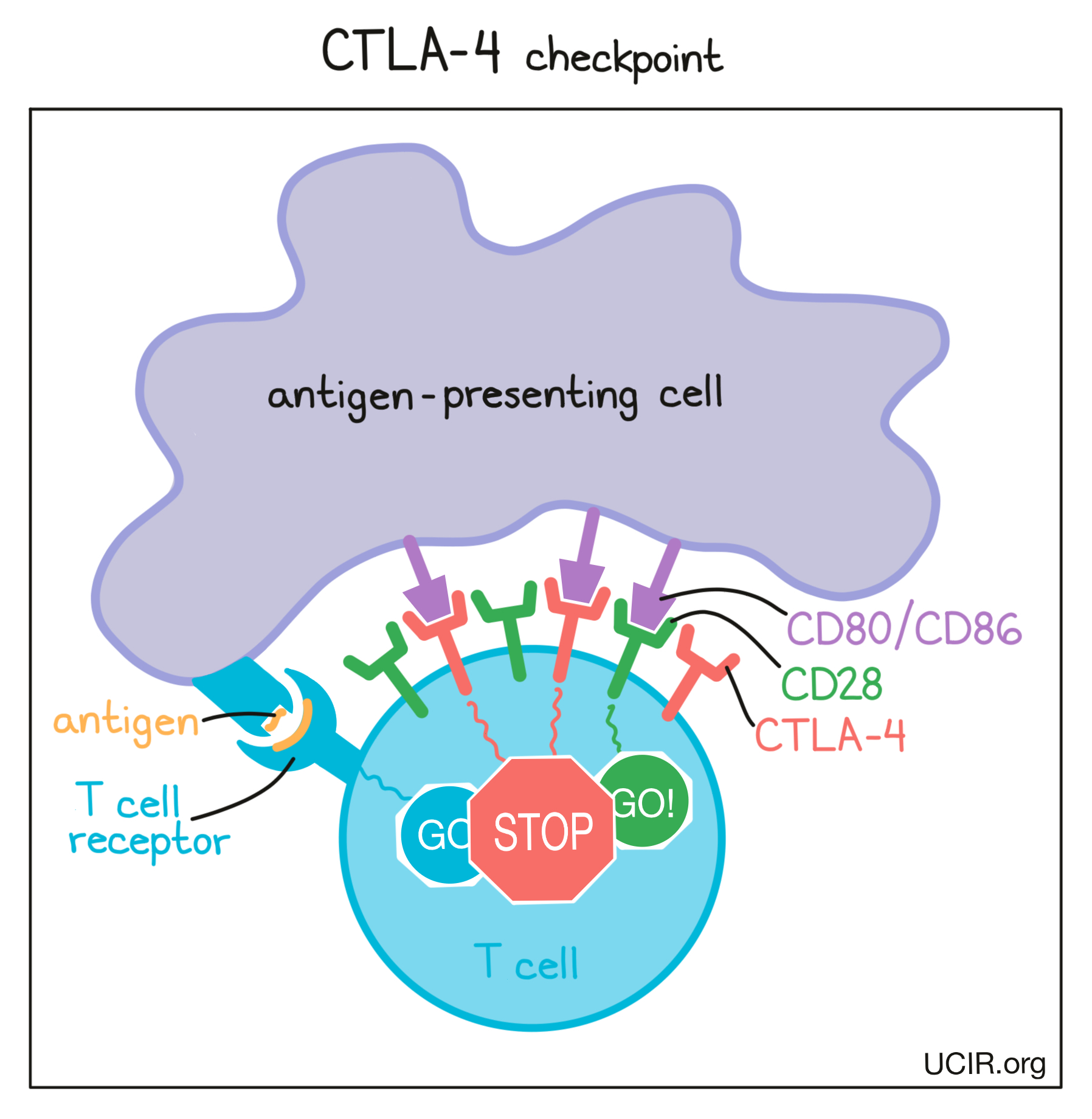 How does CTLA-4 blockade work?

In cancer immunotherapy, the goal is to activate T cells as much as possible so that they can launch a strong, long-lasting attack on the cancer cells. To increase the activation of T cells, researchers have developed a checkpoint blockade drug that attaches to CTLA-4 and blocks its interactions with CD80/CD86. This prevents CTLA-4 from sending any “stop” signals, and allows the “go” signals to triumph. In this way, blocking the CTLA-4 checkpoint allows T cells to launch a powerful, uninhibited attack on cancer cells. 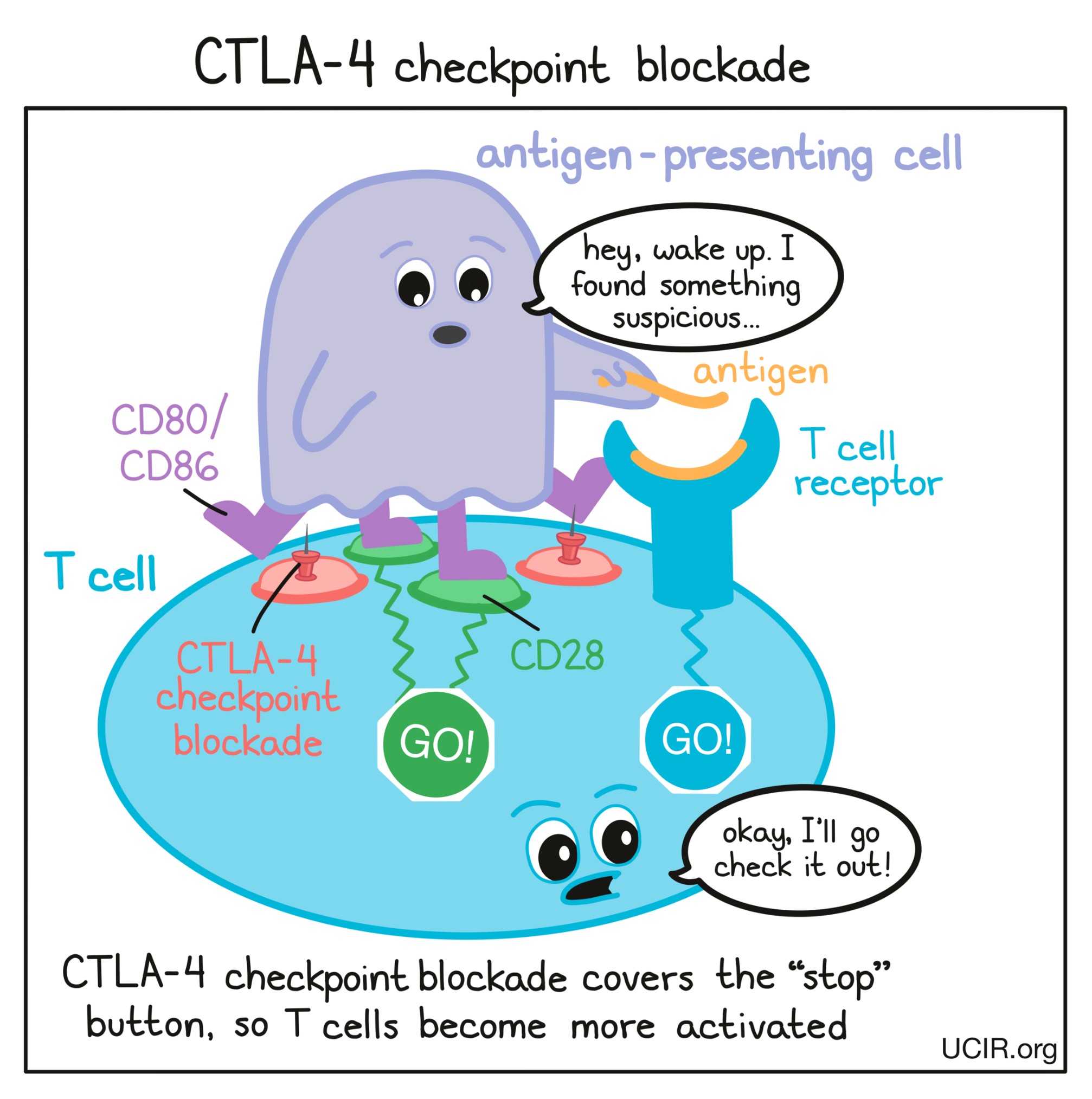 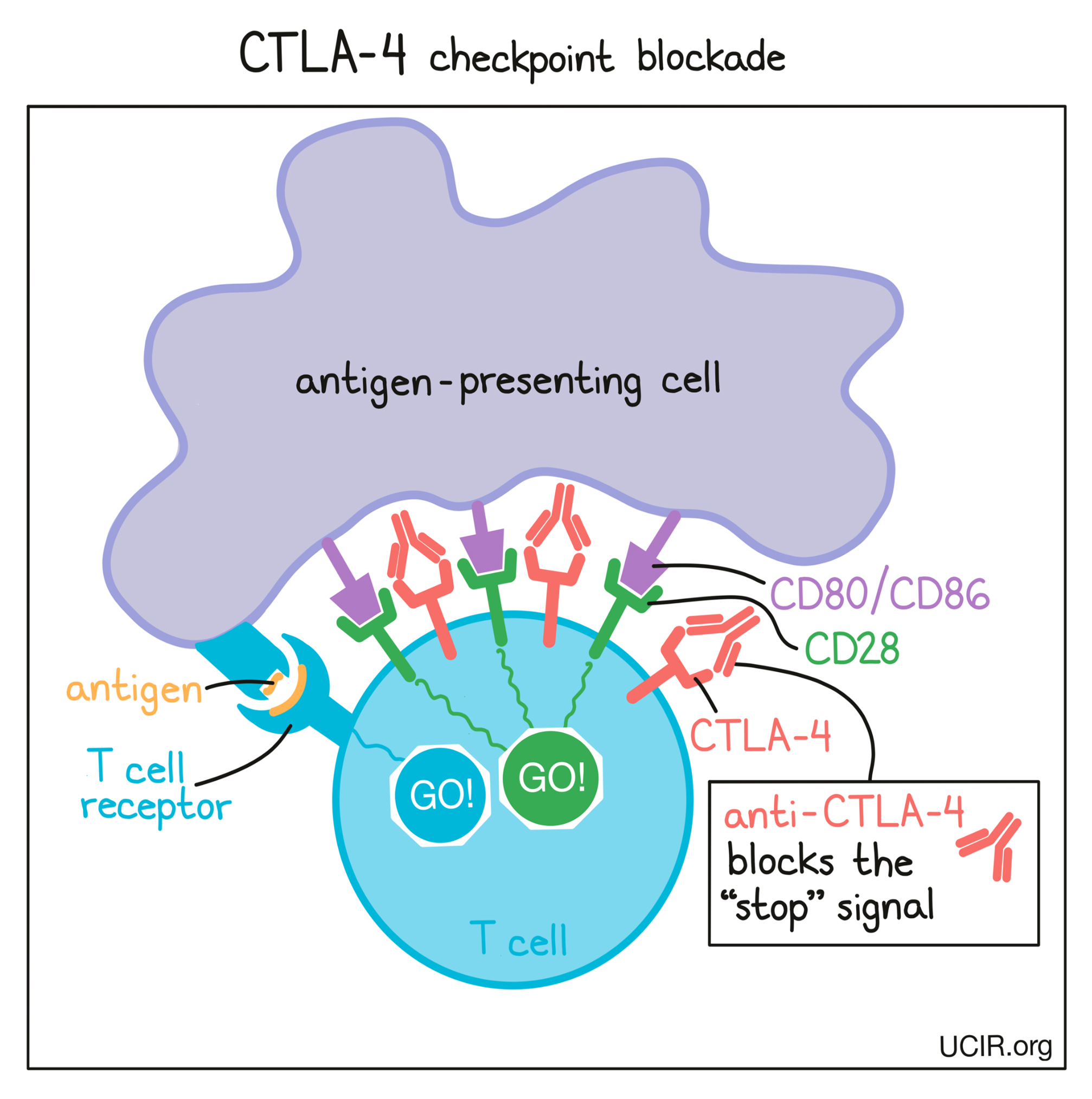 Researchers are still not sure whether CTLA-4 blockade works in one or both of these ways in humans.

Treatment with CTLA-4 blockade is relatively simple. Patients who are eligible for CTLA-4 blockade receive treatment via infusion through a vein. Treatment is given on an outpatient basis, meaning that the patient does not need to remain in a hospital after treatment. Patients should report any side effects to their healthcare providers immediately, as even mild side effects may be signs of more severe complications. Patients will require follow-up visits and scans to evaluate response to the treatment. Repeated doses of CTLA-4 blockade may be administered every few weeks.

Currently, the only drug approved to target CTLA-4 is the antibody drug ipilimumab (Yervoy), and it is used for the treatment of melanoma, kidney cancer, and some types of colorectal cancer. Not all patients respond to CTLA-4 blockade, but those who do may see dramatic tumor reduction and long-lasting responses. Exact response rates are dependent on the type of cancer, the stage of the cancer, the patient’s treatment history, and other factors that are specific to the patient.

CTLA-4 blockade takes the brakes off of T cell activation, allowing T cells to launch a less inhibited attack on cancer cells. Without brakes, however, T cells are likely to become overly reactive, meaning that they may cause damage elsewhere. CTLA-4 checkpoint blockade therapy can thus cause autoimmune and inflammatory reactions throughout the body, which can lead to side effects like rash, colitis (inflammation of the colon), and hepatitis (inflammation of the liver). Nearly all patients experience low-grade to moderate side effects. In some patients, side effects are severe and may be life-threatening. Altering the dose and schedule may reduce some toxicities and this is an area of active investigation.

When the immune system recognizes a threat, like an infection or cancer, it launches an attack. T cells become activated, begin to multiply, and then spread out in order to hunt and kill the threat on site. A T cell attack, however, needs to be controlled, so T cells have built in checkpoints that tell them to slow back down. One such checkpoint is PD-1.

PD-1 is a molecule that arises on activated T cells and acts like a set of brakes on the T cell. Once those brakes start to appear on the cell they can be pressed by another molecule, PD-L1 (or in some cases, PD-L2). When a T cell with PD-1 on its surface runs into a cell with PD-L1 or PD-L2 on its surface, the T cell gets the signal to slow down, causing the T cell to become exhausted or dysfunctional and to stop attacking. Cancer cells (and other cells that help the cancer to survive and grow) often produce a lot of PD-L1 in order to stop the invading T cells from attacking.

To prevent T cell dysfunction and/or reinvigorate dysfunctional T cells, researchers have developed drugs that block the interaction between PD-1 and PD-L1. PD-1 blockers bind to PD-1 on T cells, preventing it from being triggered by PD-L1, while PD-L1 blockers bind to PD-L1 on cancer cells and other cells that help the cancer survive and grow, preventing it from triggering PD-1. 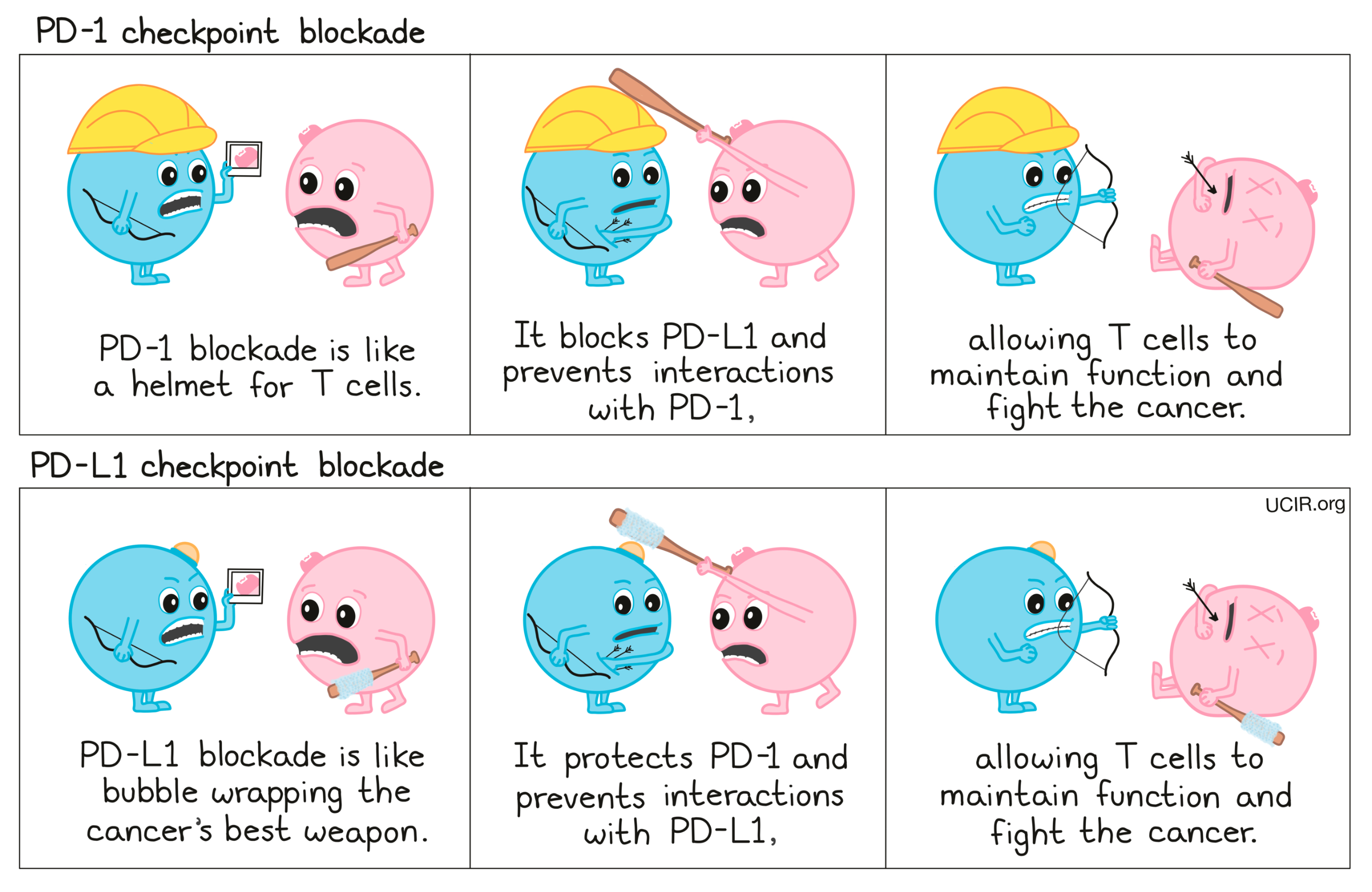 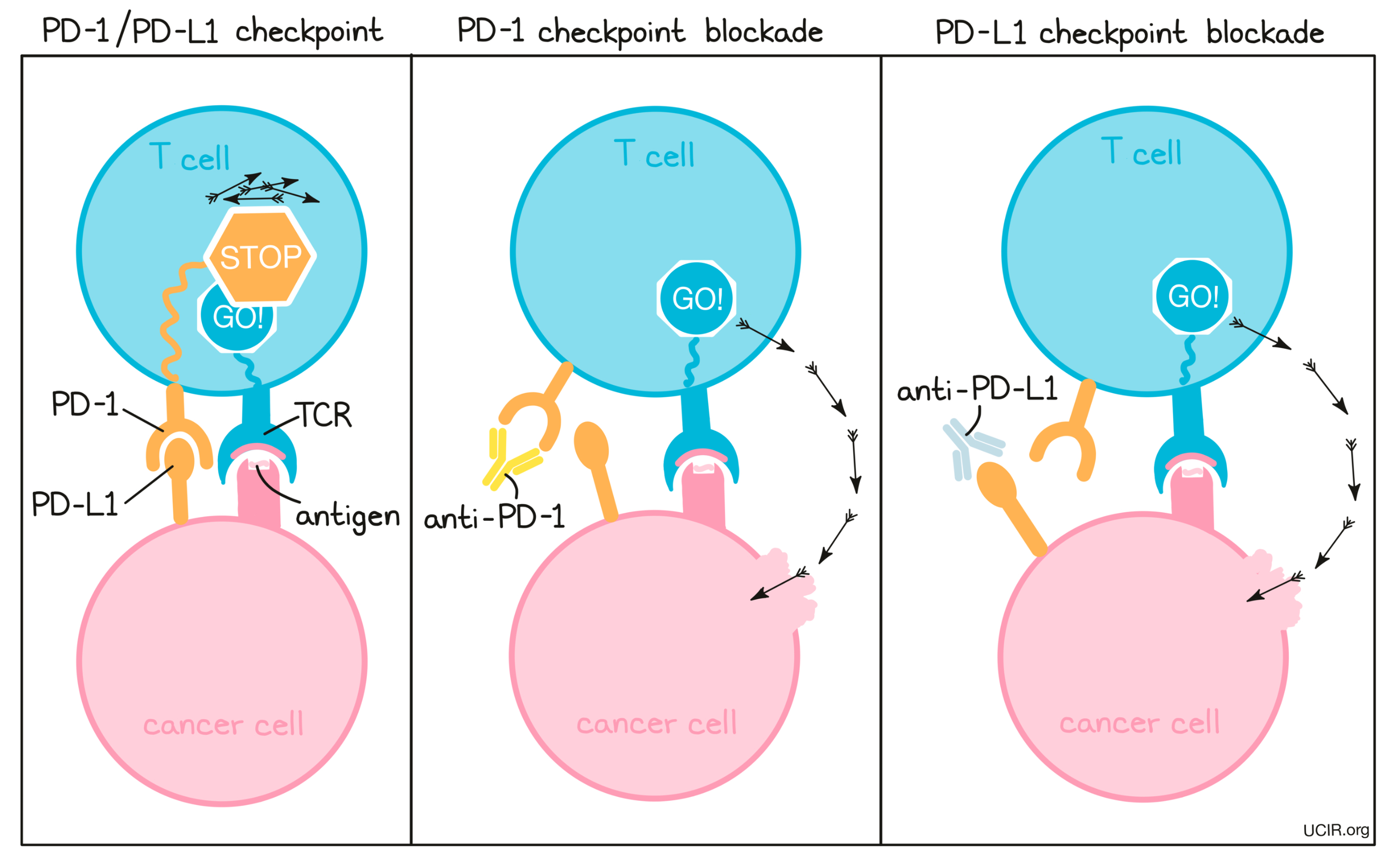 PD-1 and PD-L1 Blockade: Clinical use

Treatment with PD-1 or PD-L1 blockade is relatively simple. Patients who are eligible receive treatment via infusion through a vein. Treatment is given on an outpatient basis, meaning that patients do not need to remain in a hospital. Any side effects should be reported to healthcare providers immediately, as even mild side effects may be signs of more severe complications. Patients will require follow-up visits and scans to evaluate response to the treatment. Repeated doses of PD-1 or PD-L1 blockade may be administered every few weeks.

Several different antibody drugs targeting PD-1 and PD-L1 are currently approved for use against a number of cancers, though nivolumab and pembrolizumab are used most often. Depending on the stage of cancer or cancer type, PD-1 or PD-L1 blockade may be used as the first line of treatment, or may be implemented only after other therapies have failed. Exact response rates are dependent on the type of cancer, the stage of the cancer, the patient’s treatment history, and other factors that are specific to the patient.

The PD-1 checkpoint blockade drug pembrolizumab was the first immunotherapy drug that was approved for any cancer type with high microsatellite instability, a trait that leads to a high number of genetic mutations in the cancer cells. This is the first time a cancer drug was approved based on a feature of the cancer, rather than on the location or origin of the cancer.

PD-1 and PD-L1 Blockade: Toxicities, Side Effects, and Shortcomings

PD-1 and PD-L1 blockade therapies are generally well tolerated. Most patients experience low grade to moderate side effects, which include fatigue, rash, itchiness, diarrhea, and colitis (inflammation of the colon). Life-threatening side effects are rare, but can occur.

While PD-1 and PD-L1 blockade therapy has shown impressive and durable responses in a reasonable fraction of patients, the majority of patients do not respond, or respond briefly before the cancer comes back or starts growing again.

Which patients will benefit from checkpoint blockade?

Much of the current research on checkpoint blockade is focused on why some patients respond almost completely, while others barely respond at all. Many factors can influence an individual’s response to checkpoint therapy, including the type and stage of the cancer, whether the cancer has spread to other parts of the body, how highly mutated the cancer is, how strongly the cancer produces molecules that can inhibit an immune response, whether the tumor contains high numbers of cells (such as regulatory T cells) that can inhibit attacking immune cells, and more.

The hunt is on to understand which factors (“biomarkers”) may help to predict success or failure of checkpoint blockade so that doctors can decide which treatment options are best for their patients.

What’s next for checkpoint blockade research?